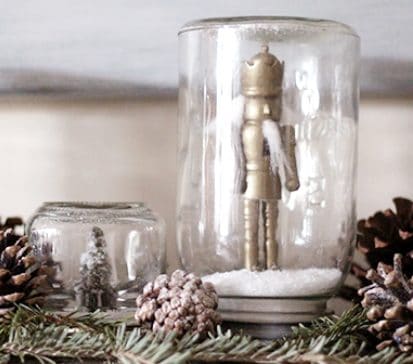 I may not want to live in a winter wonderland year-round, but I really do enjoy the snow during the holidays. What about you?

The first mason jar snow globe I made was for a friend’s daughter a couple of weeks ago, and I personalized it by adding a little Sophia toy doll inside, which is one of her favorite shows. We don’t have kids {yet} and when she named off her favorite cartoon characters I hadn’t heard of any of them. Talk about feeling old, lol. A little advice for anyone new to making these… use superglue, gorilla glue, or E600 because although the glue gun is great it doesn’t always hold up as well as these other glues. 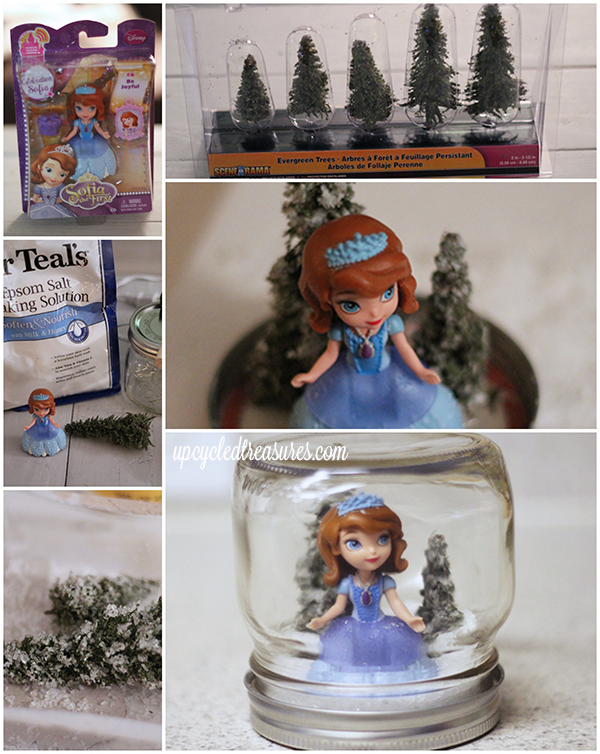 I had looked everywhere for small plastic Christmas village trees, reindeer and plastic snow to place inside my snow globes. However, Michael’s was all out of them when I went there {can you believe it!} and Walmart only had one smaller bottlebrush tree in stock. So I had grabbed the tree from Walmart and then also picked up these small evergreen trees from Michael’s, which I later brushed with Mod Podge and rolled in Epsom salt. 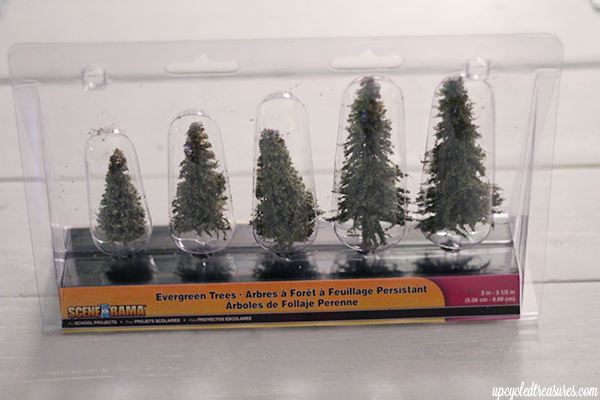 The only thing about these Scene”A”Rama trees is that there is a wire that pokes through the bottom making it difficult to glue them to the mason jar lid. These would be great if you are making a small scene in the snow globe where the tree is lying on top of a car, but for standing up it was a little more difficult. I actually poked and glued them to some cardboard and then glued that to the mason jar lid to help keep them in place.

I also poured a little glitter in the jars first, put the lid back on and shook them up a bit to get the glitter to spread around the jar sides and stick to some areas. This is a great idea if you are making “snowless” snow globes that will be holding gift cards because it adds a little sparkle to them. However, I noticed that when I added glitter AND epsom salt, the epsom salt wiped off the glitter when the snow globe was shook. 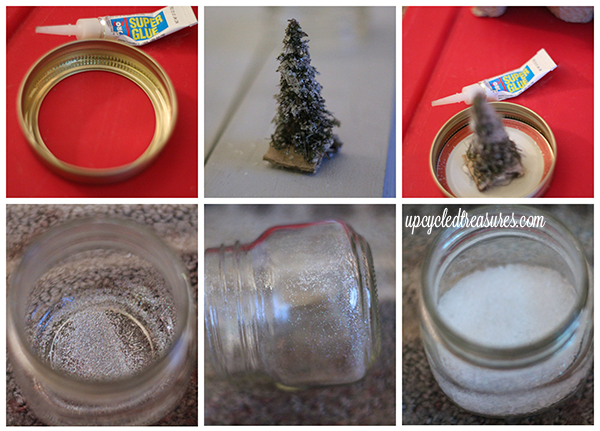 I had painted some nutcrackers a few weeks ago and decided to use the smallest one in another mason jar snow globe. This guy was actually an ornament before I removed the ornament string and painted him gold. I think I got him at the dollar store a couple of years ago. Before I painted him I actually removed his hair and beard – which surprisingly came off pretty easy and then I glued them back on afterward. Sorry, I don’t have any before photos to share.

Since I was putting him in an older mason jar where there was more of a dip between the lid and the jar, I glued him onto a round wood slice and then glued the wood slice to the jar lid.I have seen people use legos too, which is brilliant because you can change out your inside scenes easily too. Unfortunately, I didn’t have any legos on hand. Before I did that the nutcracker was knee-deep in snow and looked kinda funny. 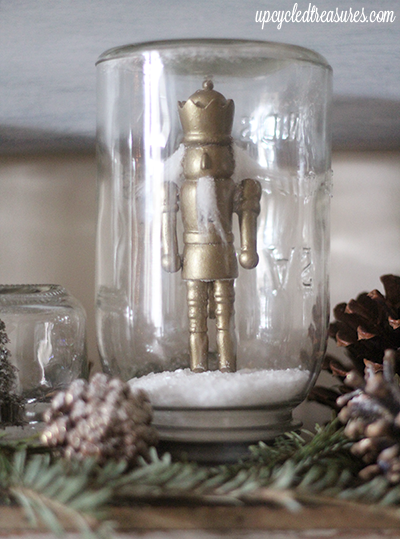 I prefer to buy personal gifts over gift cards, but sometimes a gift card is easier and I know that the person will be able to buy something they actually like. However, I do enjoy finding creative ways to give gift cards and think that the waterless DIY mason jar snow globes are perfect! Of course, I didn’t add any Epsom salt {aka fake snow} to this jar – just some glitter shaken around a bit to add some sparkle. I then glued the bottlebrush Christmas tree to the lid, placed the gift card inside the jar and called it a day. 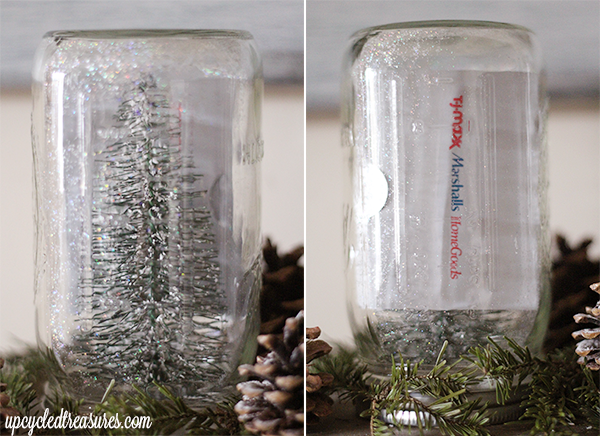 What’s so great about these DIY mason jar snow globes is that they are easy to make, you can really personalize them, and you can use items you already have around your house such as older ornaments. Did I mention they are freakin’ adorable? 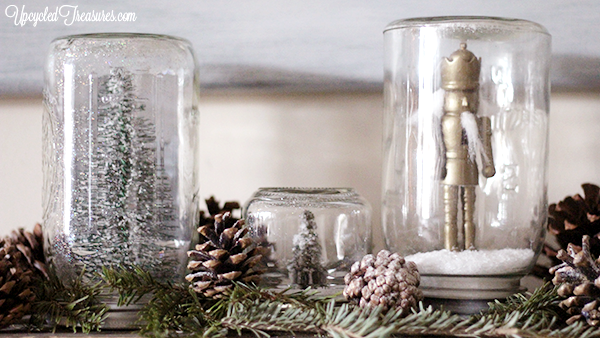 Linda from It All Started with Paint made a car in a mason jar snow globe last month and I have been wanting to make one ever since! I actually had to make a last minute run to Walmart last night and they had some vintage toy cars in stock, which they didn’t have a couple weeks ago when I was looking for them. So I snagged a couple to use as mason jar gift card holders as well, and this time I didn’t even glue anything down.  I just put a little glitter and epsom salt in the jar, tied one of my trees to the car with bakers twine, placed it in the jar with the gift card,and then wrapped one of my chalkboard ornaments around the lid, which I painted with Annie Sloan chalk paint. Here are a couple of those DIY mason jar snow globes: 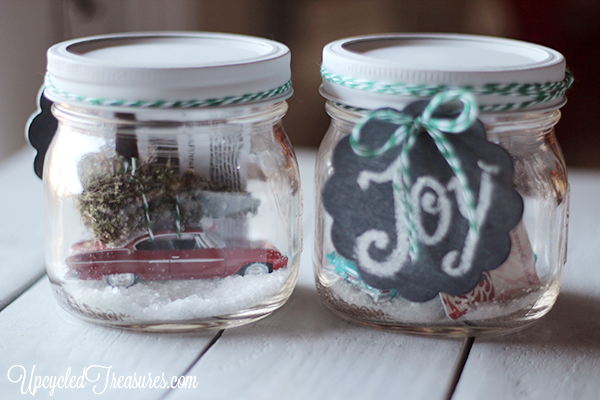 Did you make any DIY mason jar snow globes this year? I think next year I will actually make some with water. 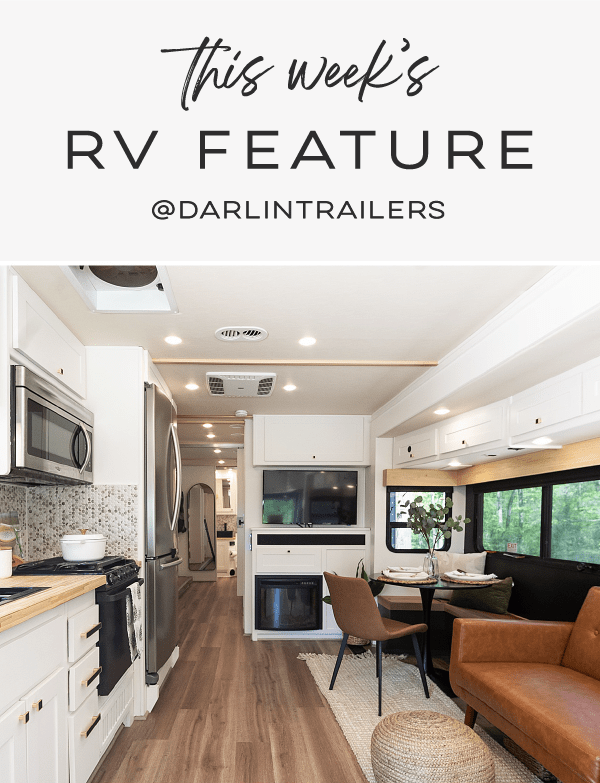