I hope you all had a great weekend! This past week we had Eric’s sister and cousin stopped by from Florida for a couple of days and then spent the 4th of July at my sister’s house. The weather was pretty crummy all week but we still set off a few fireworks and enjoyed some yummy food, including these AMAZING apple turnovers my sister made. 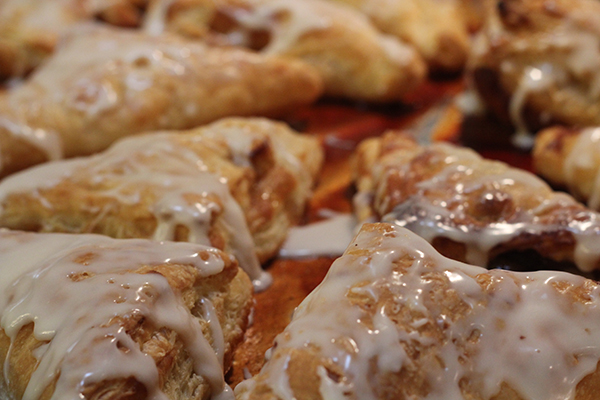 My computer has been running pretty slow lately so on Friday I finally decided it was time to clear it off and start anew. It seems to be doing much better now so I am excited to be able to use it again. I didn’t accomplish as much as I wanted last week {what’s new?!}, but I did work on an easy rental kitchen update and then completed a 360 table makeover.

If you live in an apartment or are renting a house then you too probably search for ways to temporarily update your space without spending too much dough. Well, I have been wanting to update the knobs in our kitchen for some time now and originally planned on buying some new ones to use. However, there are 20 knobs in our kitchen and that’s A LOT to replace.

Luckily, our apartment community has been undergoing some renovations so they have been throwing out tons of cabinets these last couple months. Management said they had no problem with me “rescuing” what I want so I have been collecting knobs here and there, and am also using a couple of cabinets to store some of my paint and supplies. Yay for free storage and knobs! 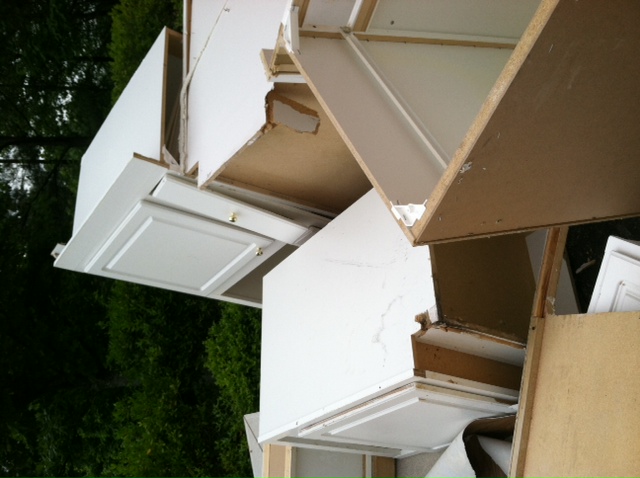 They will most likely be doing the same thing with our kitchen cabinets once our lease is up, but before updating the hardware I wanted to make sure I had enough of the “original” knobs to put back once we move out, just to be on the safe side.

I was in the middle of cleaning the kitchen the other day when I realized I should have enough knobs, and that it was time for them to get a makeover. I removed the knobs from the cabinets {a little too quickly and hence the reason for my lack of before photos} and spray painted them with rubbed oil bronze, boy do I LOVE that stuff! I did 2 light coats followed by a clear coat of sealer. It really does make a difference and the kitchen seems so much more updated. Not too shabby for some free knobs and a can of spray paint. Such an easy rental kitchen update! Goodbye yucky brass hardware! 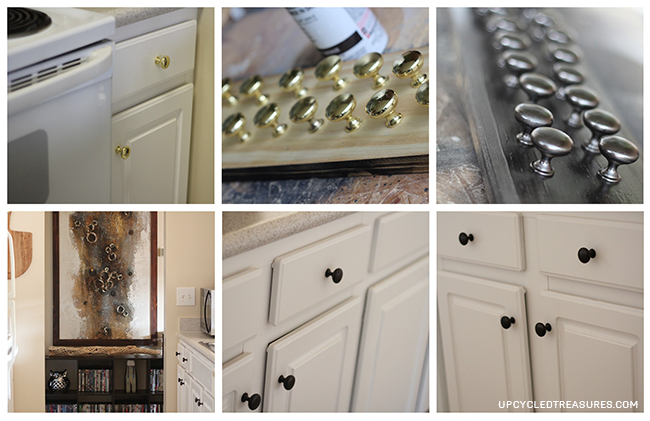 As for the 360 table makeover… Well, you may remember this chevron table I painted a couple of months ago: 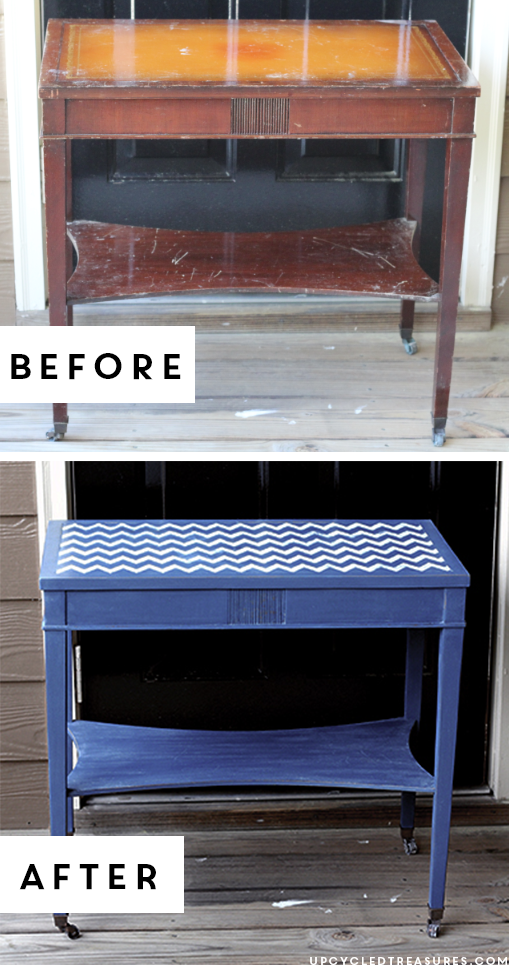 I had posted it for sale online a while back but had no bites so I decided to change it up. One day I added a quick coat of gray chalk paint just for fun… 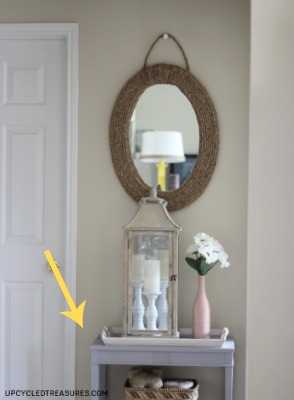 I then sanded it down thinking I would change it again, but it eventually joined the pile of unfinished projects. 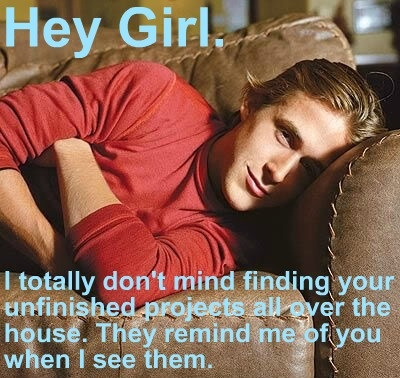 Last week we received a call from a super sweet lady about the blue table to see if it was still available. Of course, Eric, being the silly boy that he is, said it was. Guess he hadn’t realized that there wasn’t a bright blue table in our apartment anymore, lol. Well, it turns out I forgot to remove the ad from furnishly, a site I randomly came across one day, but I told her I could absolutely re-paint it and that’s what I did!

I painted it with a custom color of blue chalk paint, added a chevron stencil to the top {I traced it out with a white art pencil and then hand-painted it on with a brush}, then did a little bit of distressing and sealed it with some wax. It was a lot of work in a short amount of time but I have to say that it looks pretty close to the original makeover, and I really hope that her son will enjoy it – it’s going in his room. Guess the table was meant to be blue all along and I may just like it better the second time around… 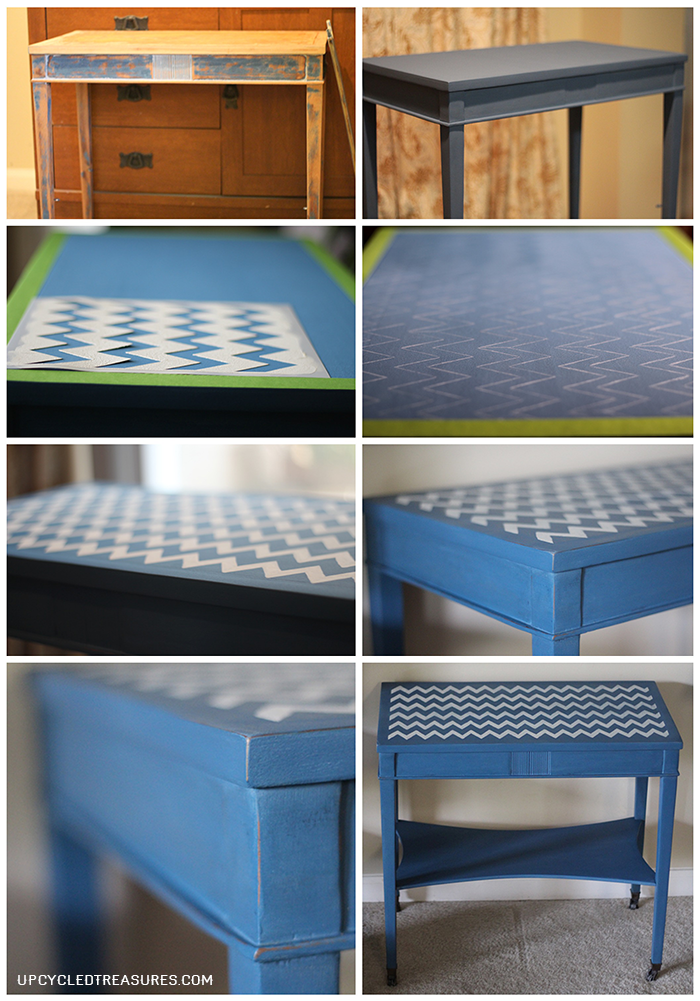 Thank you to everyone who emailed me with such encouraging words these last few days, and for understanding my post shortage.