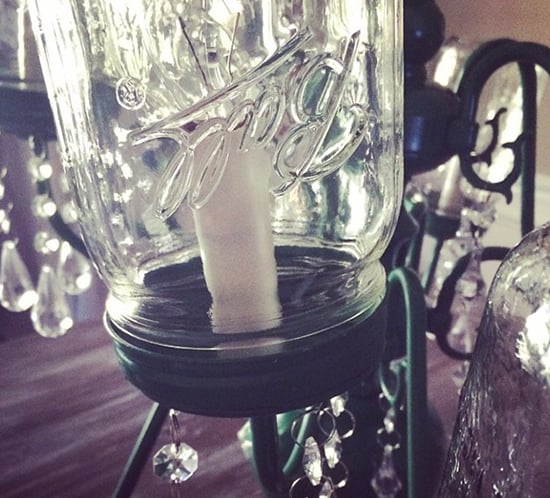 Disclaimer: This post may contain affiliate links, meaning, if you click through and make a purchase we may earn a commission. This is at no additional cost to you. View our full-disclosure here.
Pin
Share
Tweet
Email
15K Shares

Have you ever noticed how lighting can transform a space? From floor lamps to table lamps, overhead lighting to chandeliers, picking out the perfect lighting can sometimes become a daunting task.

Add budget into the mix and you may find yourself in a bit of a pickle. That’s where DIY and upcycling can help bridge the gap of finding that perfect lighting without paying an arm and a leg for it.

Last year I came across this outdated, brass chandelier at Goodwill, and with a price tag of $7, I knew I couldn’t pass it up! 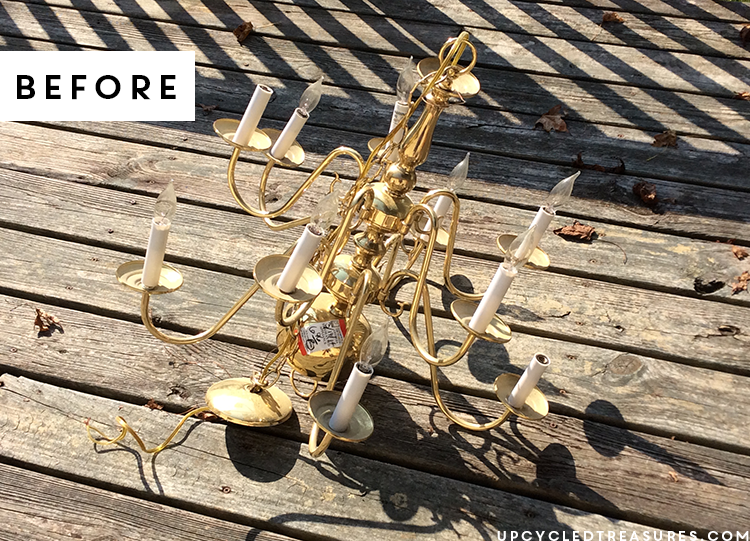 Despite the fact we are renting, I wanted to change out the lighting in our dining room as well as in my office. I wasn’t sure where exactly this treasure would go but knew I had to snatch it up.

You may recall the mason jar chandelier I made before our wedding that was left behind at the cabin venue, which is partly why I wanted to make another one. The one thing I would have changed about that chandelier was that it didn’t have enough crystals. So this time I decided to add even more to give it some added sparkle.

Here are the materials I used for this project, most of which we already had on hand. If you want to use mason jars, the size and number will depend on the chandelier you have. The kind, size, and the number of crystals you use is also up to you.

Rustoleum Meadow Green Spray Paint {or whatever color you want}

The first thing I did was gather up our mason jars, which there never seems to be a shortage of around here. Due to the size of the lights, I used quart size jars {I used pint size on my other mason jar chandelier}. 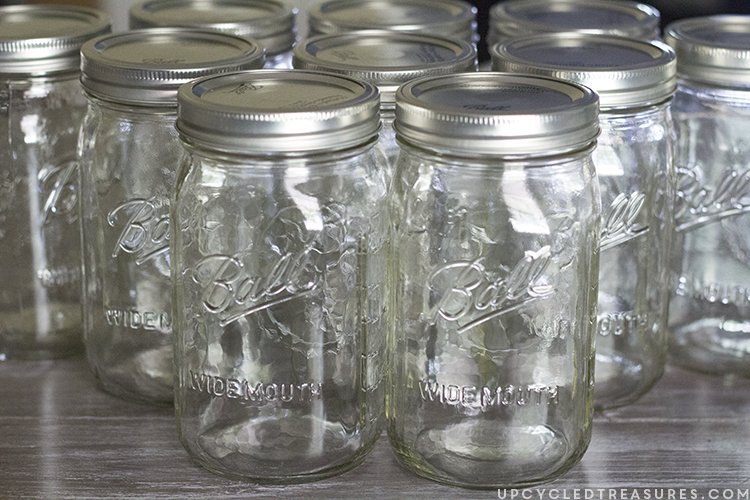 I then gave the chandelier a light sanding to help the paint stick easier later on and vacuumed out some of the dust before gluing the mason jar lid rings to it with E600 Glue.

Let me start off by saying that I did things a little backward here because as you may already know, impatience sometimes gets the best of me. Basically I spray painted the chandelier and THEN drilled the holes which was a bonehead move. So I then had to re-paint the chandelier again after the holes were drilled because I accidentally scratched off some of the paint. So um yeah just be sure to drill first and THEN do your painting. In fact, I’d probably drill the holes before even adding the mason jar lids to the chandelier.

So you will notice that the chandelier is already painted in a couple of the photos below,  but I want to show the photos in the steps that I recommend taking vs the steps I took.

The reason I added the lids is so the mason jars can be easily screwed into them, and are removable if the bulbs need to be changed. I can’t for the life of me find a photo of this part being done, but you can see what I mean on this post. 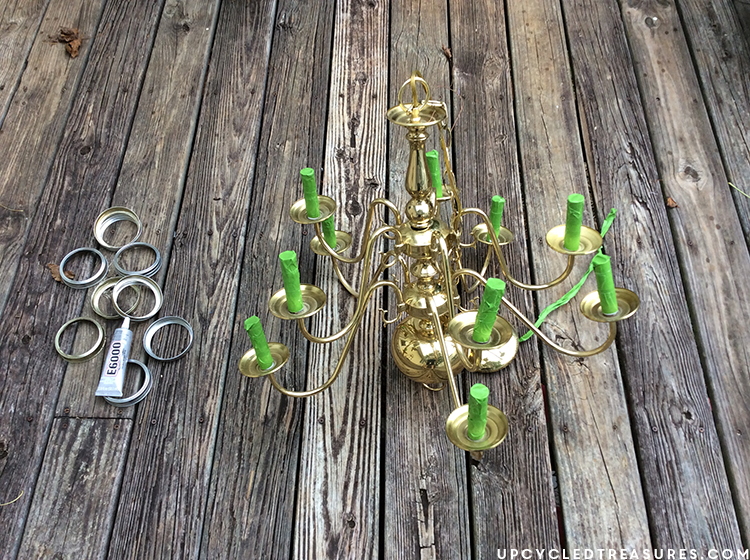 I also taped the electrical areas off so no paint would get on them. You can see what the lids look like attached to the chandelier below. 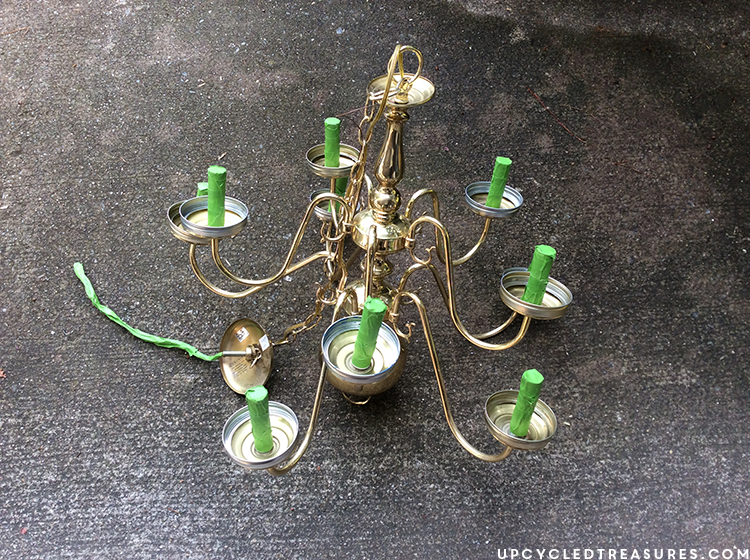 Drilling holes for the Acrylic Crystals

Once the glue is dry for the lids you can then begin to drill your holes for hanging the acrylic crystals. First I decided how many crystals I was going to hang from each light and where to place them. I then marked off where I wanted to drill into the bottom of the lights using some chalk. I decided to drill 6 holes per light because I wanted to hang 3 small strands of crystals per light and each hanging strand would use up 2 holes.

So I marked those areas off with some white chalk so I knew where to drill. I had set the chandelier face down – propped it up on some boxes to keep it in place, and also had Eric hold the chandelier down to keep it even sturdier while I drilled.

You will want to make sure to drill straight down with some good force, but using our new Ryobi drill made this a breeze! I did break a couple of drill bits and accidentally scratched some of the paint off the chandelier, but after drilling a couple of holes I got the hang of it. Again this is why I recommend drilling the holes before painting. 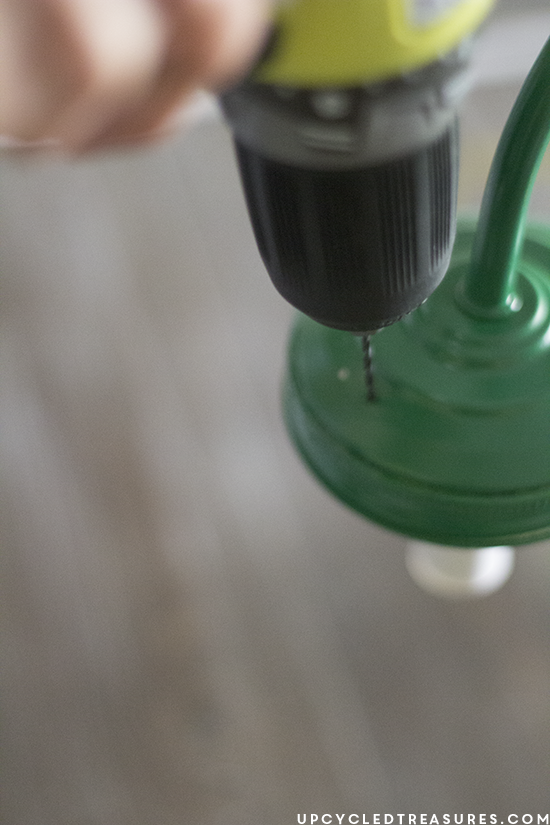 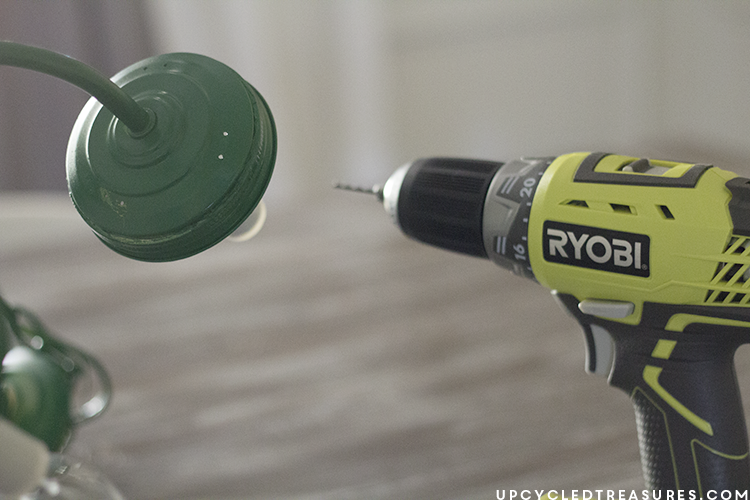 You can see what each arm looks like with the drilled holes below: 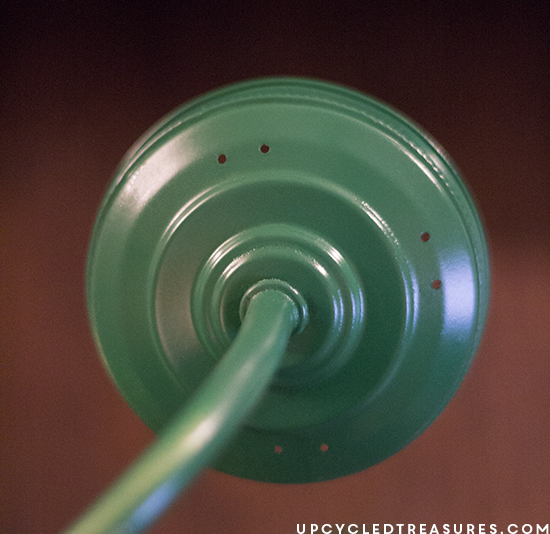 I decided to stick to spray paint at the time because this was before I had my Homeright Sprayer. If you do have this sprayer then you can basically paint your chandelier any paint color you want with ease! If not, there are several fun spray paint colors to choose from.

The color that spoke to me was Rustoleum Meadow Green which looked a bit emerald-ish. I thought it would be awesome in our dining room because I wanted to add a pop of color in there that would fit our rustic style. Besides, I figured if I didn’t like it, I could change it. 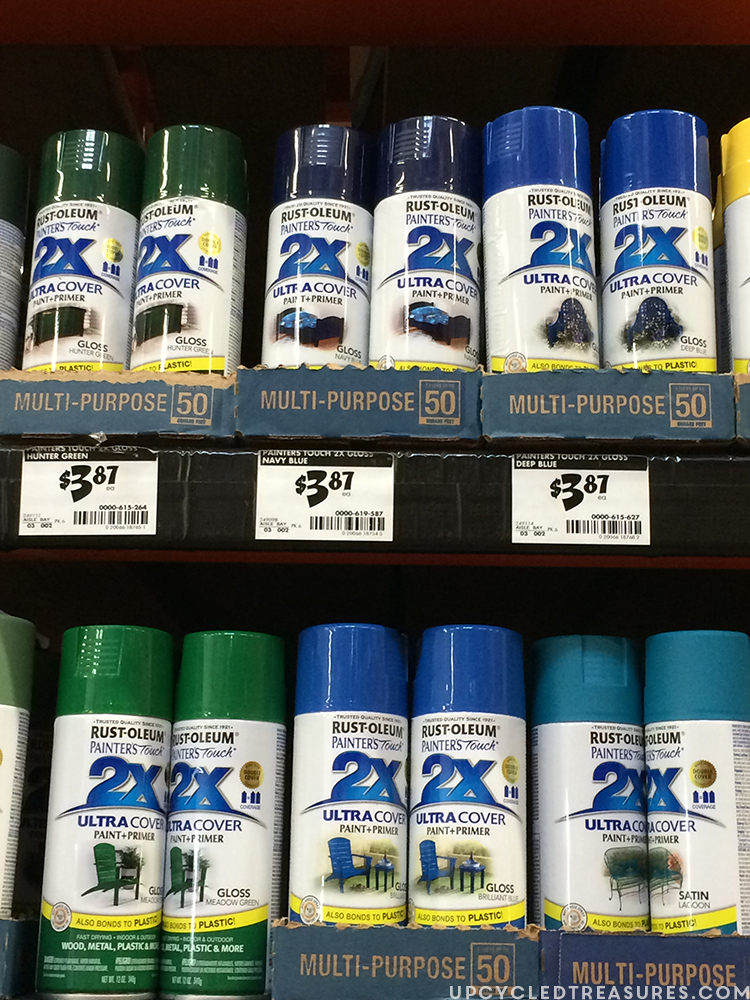 I decided to hang it from one of our shepherd hooks to make painting it easier. I also used my comfort grip sprayer which makes spray paint go on more evenly and doesn’t seem to waste as much either. 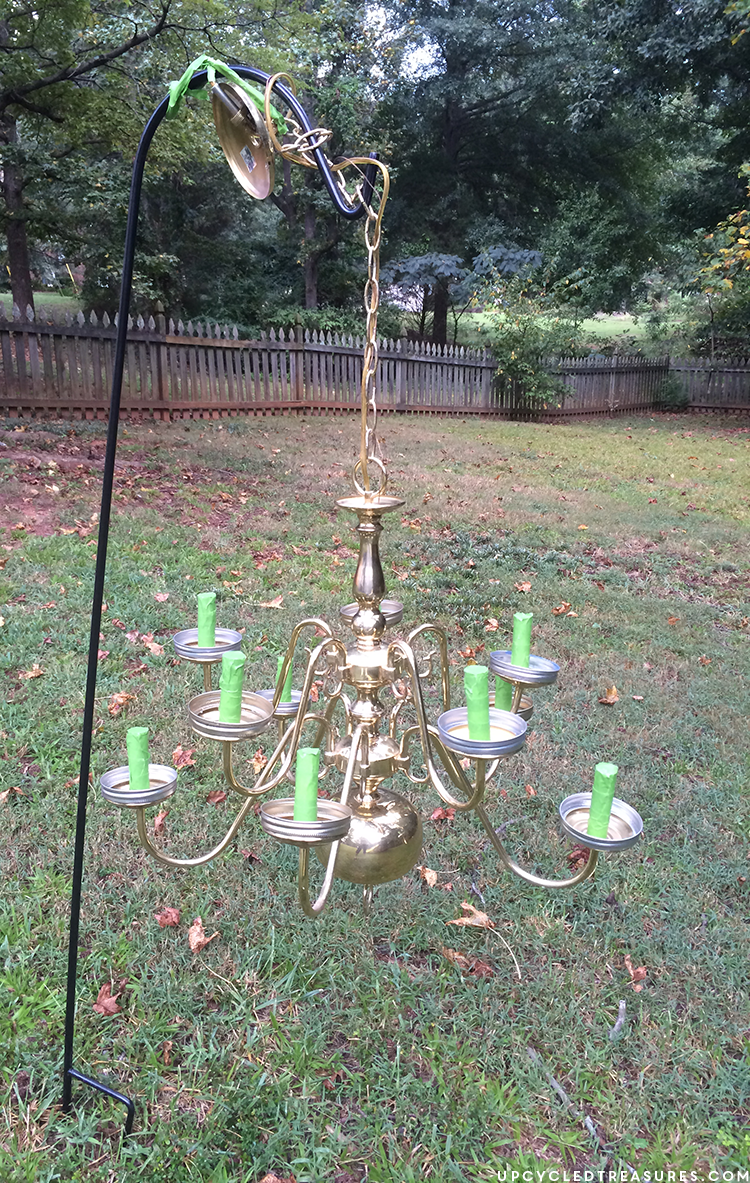 After a couple of coats this is what it looked like, and I just love the emerald color! 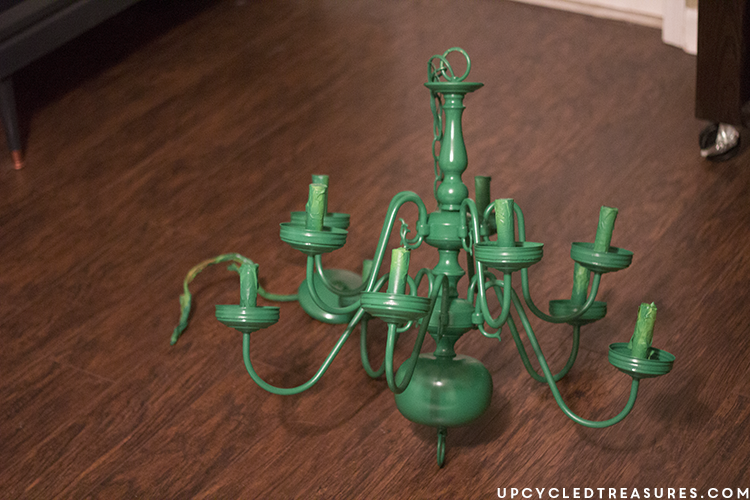 At this point, you will also want to spray the chandelier with some clear sealer to prevent the paint from scratching.

Then it was time for the fun part, adding the acrylic crystals!

Adding Acrylic Crystals to the Chandelier: 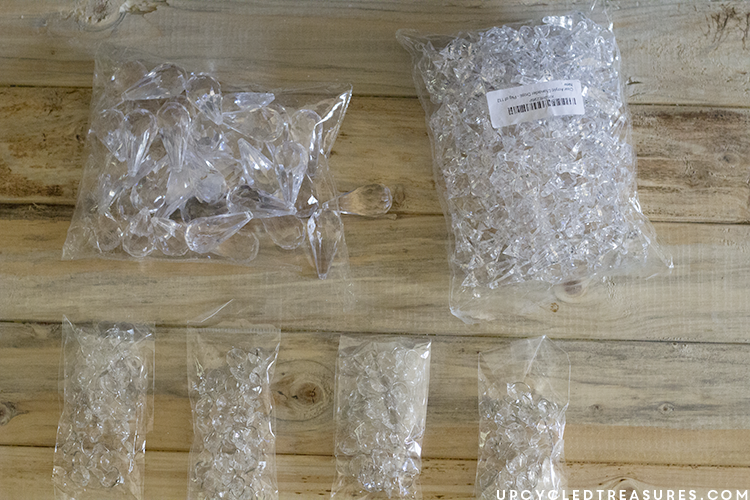 I had taken some of the strands apart so that I could create the small strands with either the medium or large crystals attached. It was less expensive to purchase the crystals without the jump hoops, and then add them to the crystal garland that came with the jump hoops.

I basically replaced some of the smaller crystals with the medium or large size crystals as you can see below. The strand with 3 small crystals and one large crystal was for the drilled holes, so I made 3 of these for each light. The smaller strand with a small and then medium crystal was going to be hooked onto another area of the chandelier that you will see in a bit. 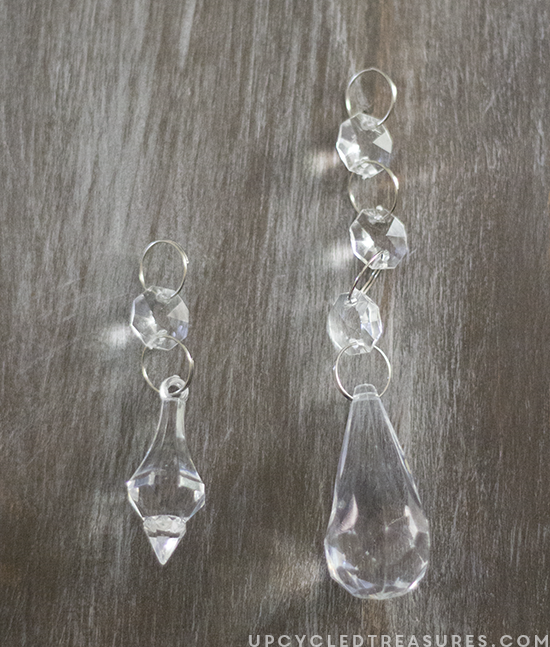 I then used fishing line to thread the hoop through the drilled holes and double knotted them off. You can see how they looked attached in the photo below. You could also use some thin wire. I had fishing line on hand though so that’s what I used. 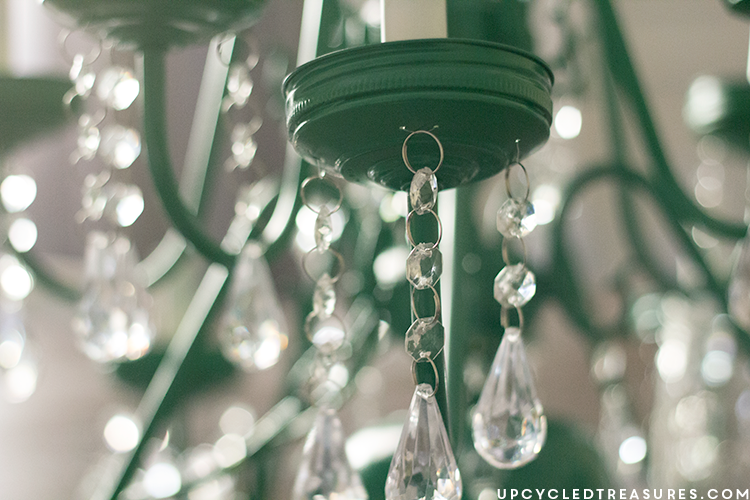 I just hooked the smaller strands onto another section of the chandelier as you can see below: 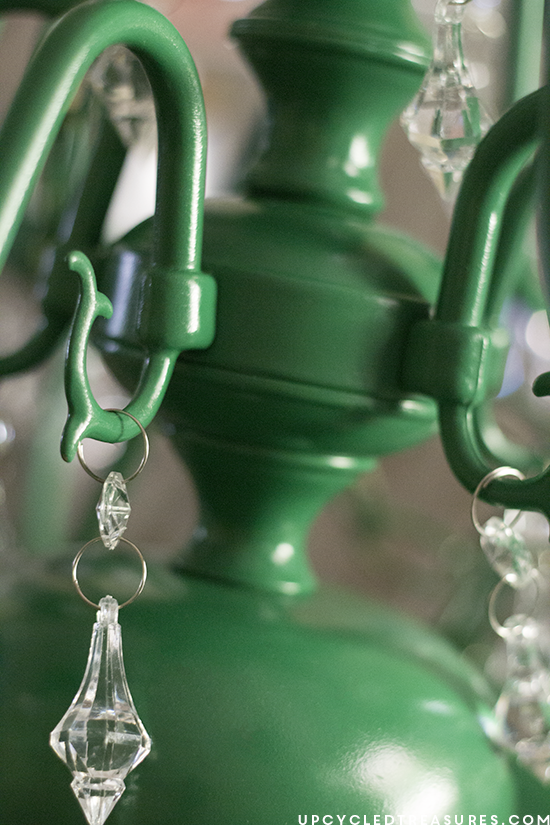 I then decided to string more of the crystal garland across the chandelier to add even more sparkle. I actually still have extra small crystals, although I did use up all of the metal jump hoops.

This vintage-inspired chandelier first made its debut during my 2014 fall home tour, back when it had mason jars attached. You may also recall the sneak peek I shared on Instagram: 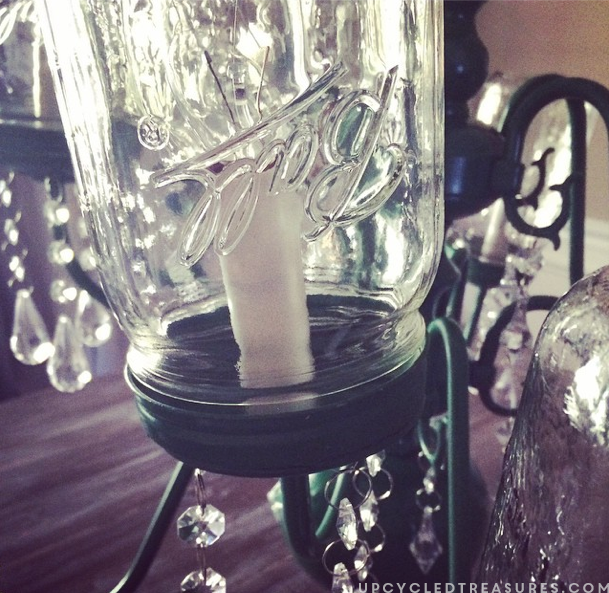 I later decided that I wanted to change out the bulbs to smaller ones that didn’t have as much voltage, and was also curious what the chandelier would look like without the mason jars. I think winter was so long that Spring has me making changes ALL over our house, haha.

Anyway, when I removed the jars and changed out the bulbs I decided I liked the chandelier even more! It now has more of a vintage-romantic vibe about it, which I love. I also really like how it looks with the mason jar lids still attached.

Here is the before and after of our vintage-inspired chandelier: 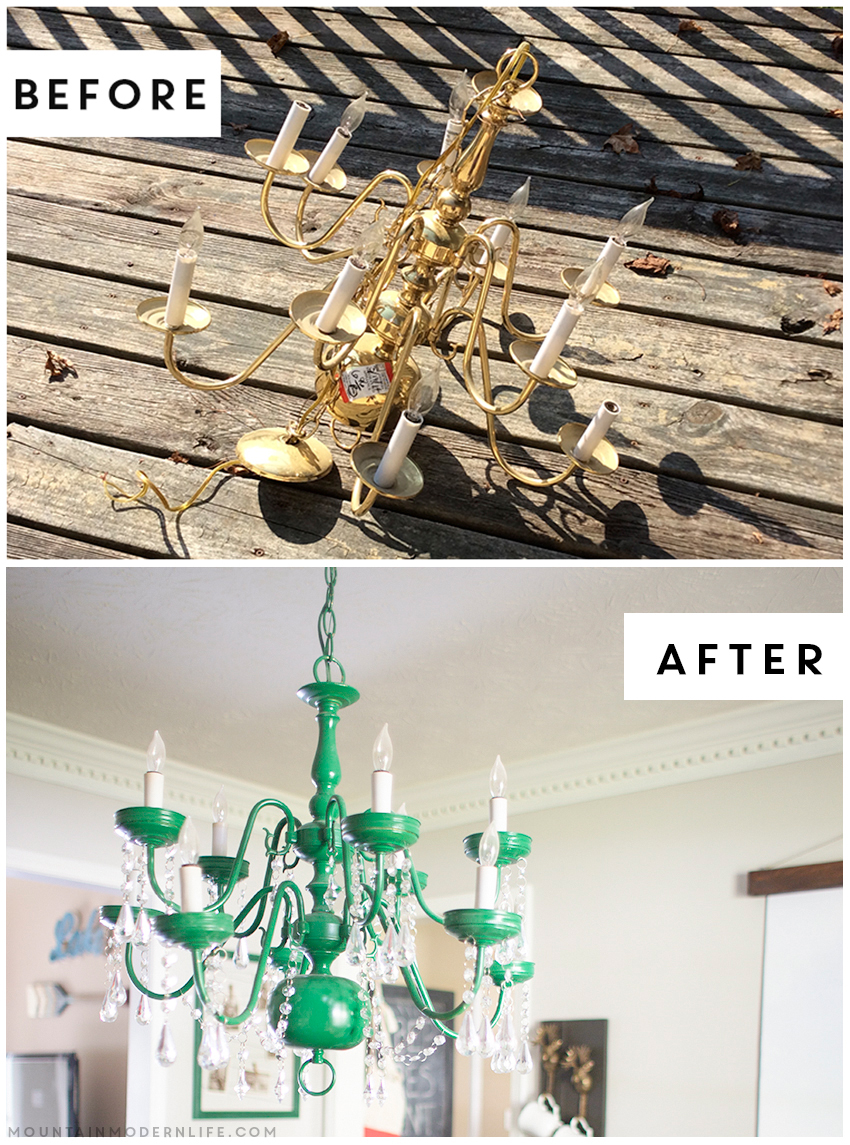 I just LOVE my vintage-inspired chandelier in our dining room, which has slowly been updated over the months and now has some of my favorite DIY projects including our West Elm inspired dining table and upcycled barnwood-style cabinets.

What do you think of my new vintage inspired chandelier? 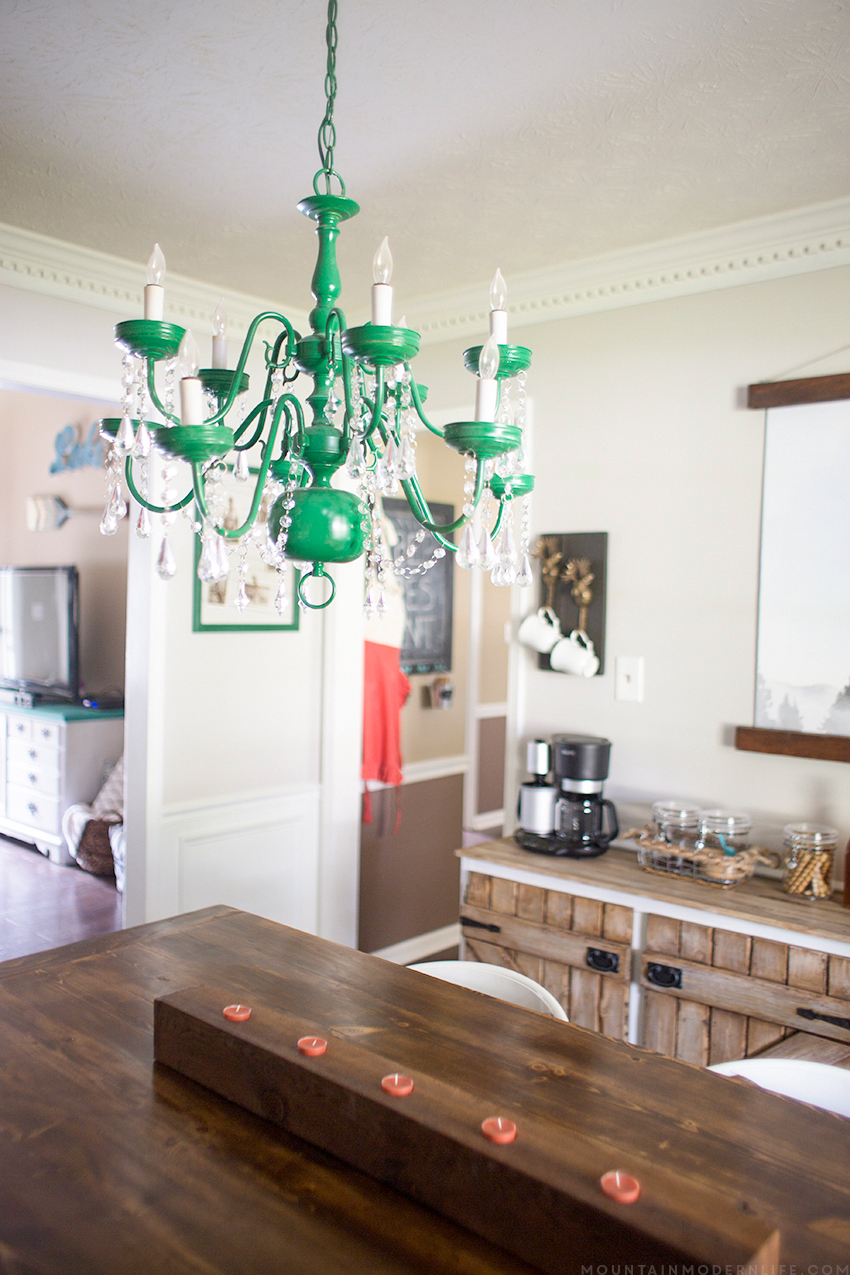 Overall I’d say I spent about $50 total on this vintage-inspired chandelier, with the crystals taking up more than half the budget at roughly $30. Most of the materials/tools I already had available, but the cost can vary depending on what you have and what you use.

Is it safe to keep mason jars on the chandelier?

For those that are wondering though, I had this chandelier with the mason jars on it for over 7 months with no issues. Yes, the chandelier was heavy but it held up fine and the jars were never hot, even after leaving the light on for an extended amount of time. That could also be due to the bulbs used so I would recommend using LED lightbulbs if possible and just checking to see if the jars get hot when the light is on.

Since this chandelier had more arms/lights and required larger jars I think the jars were just a bit overpowering vs my other chandelier which only had 5 arms. Either way, I love how it turned out and the bold color makes me happy every time I look at it.

So whether you are looking for something rustic, romantic, or vintage, I hope you won’t overlook those outdated chandeliers the next time you are browsing the thrift shop aisles 🙂