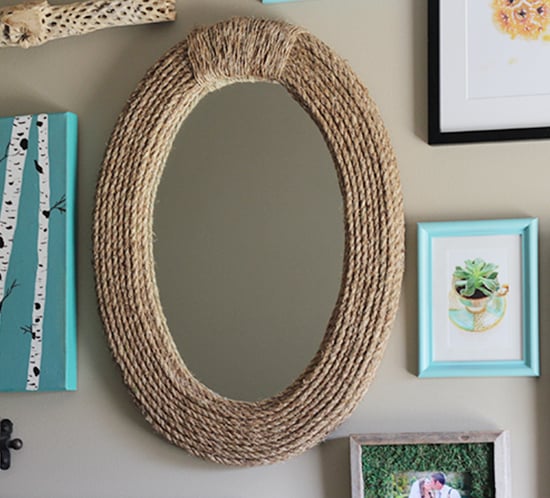 My latest project tested out a few different styles before finding its true self – a nautical rope mirror. 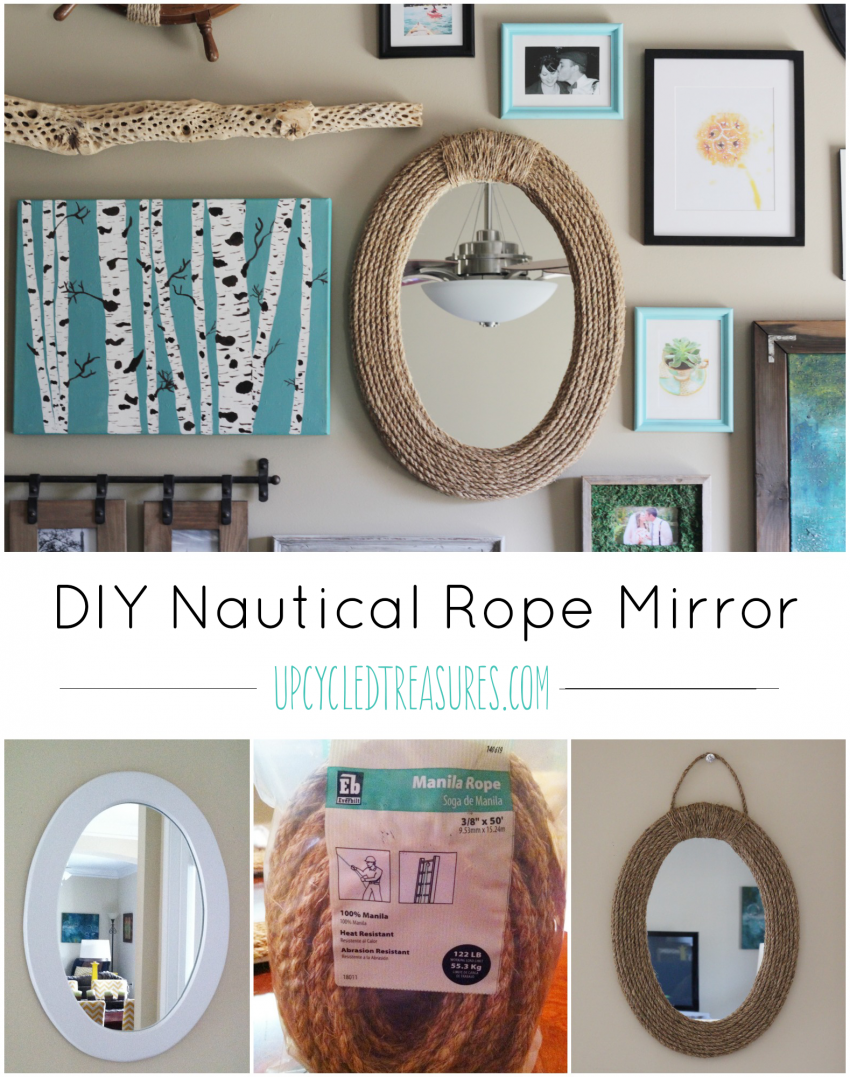 I had originally planned to simply freshen up the look of this mirror with some paint, but after I painted it yellow.. and then in white, I wasn’t completely satisfied and felt it was missing something. Then, last week while browsing the Houzz website I came across this awesome Pottery Barn rope mirror  as well as this rope mirror.

I love texture and all things nautical so rope has been on my mind ever since I saw this rope ottoman on Pinterest and felt this was the perfect opportunity. After I had decided that rope was the direction I would go in, I searched a few other rope mirrors and was inspired even more by this post as well as this nautical mirror via Moss Eclectic.

This is the mirror painted white and hanging on the wall – awaiting its new makeover. 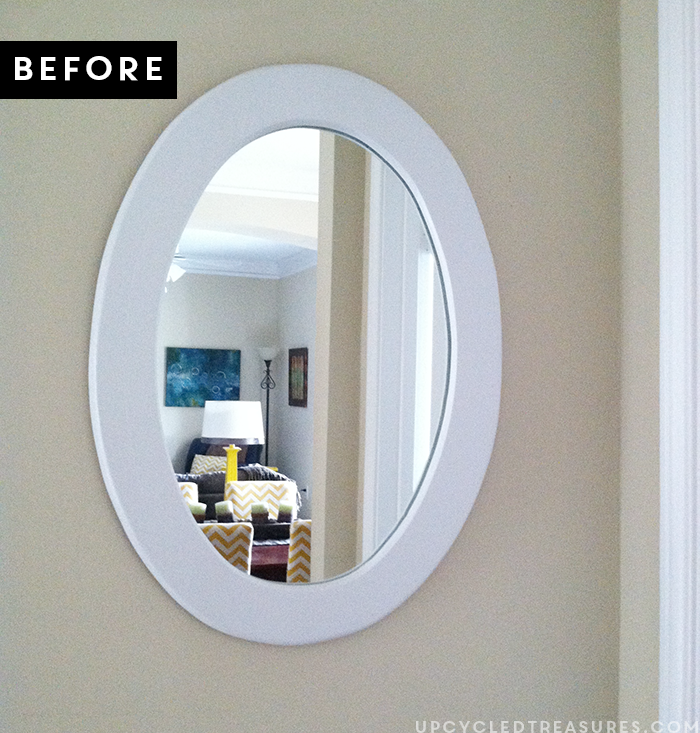 {Full Disclosure: This post may contain affiliate links for your convenience, meaning if you click through and make a purchase, I may receive a small commission at no extra cost to you. This helps me run and maintain the site, thanks for your support! View My Privacy Policy here.}

Here are the supplies you will need for this project:

Most of the DIY posts I have seen simply glue the rope directly onto the mirror. It turns out the mirror I have (which I found at a thrift store) is actually from the Carolina Mirror Company, a very reputable company, and it was dated April 10th, 1979. The month I was born and the year my brother was born which is pretty neat. It’s a super nice mirror and also super heavy. Since I had the frame, a nice wooden one at that, I decided it would be easier to add the rope onto the frame, rather than onto the mirror.

So I cleared off my dining table (which I swear I’m going to refinish here soon – Update: Check out my french cottage dining table makeover here), and unscrewed the frame from the mirror. I then cut the rope at a diagonal and began placing it on the inside of the mirror, gluing down a few inches at a time. 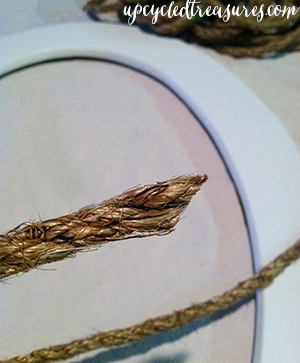 I cut the rope at an angle and glued the ends together every time I finished a loop around the mirror. This was pretty tedious but took less than 2 hours so it really wasn’t that bad, and it was fun watching it come together.

Side Note:  After working on my rope lamp shade and rope candle holders,  as well as speaking to Lu from Hometalk {Thanks Lu!} I wanted to mention that you may want to try using one continuous piece of rope {like this rope mirror from the Shabby Creek Cottage}, rather than cutting it every time. If you end up completing this project I would LOVE to see it! 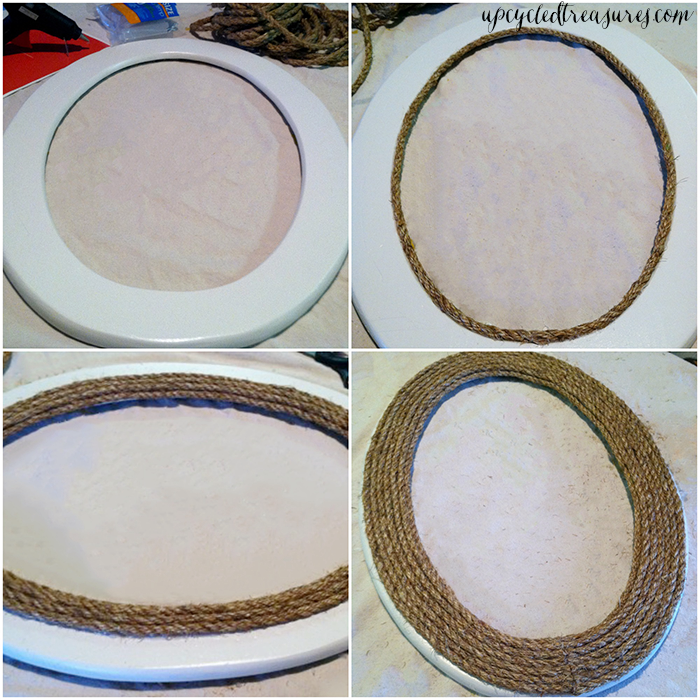 When I had finished going around the mirror there was a seam showing where are the ends had been glued together. I wasn’t a big fan of this and tried to figure out a way to cover it up. At first I decided to take smaller threads within the rope and interweave them to try to make the seam less obvious…. this half worked. The seam was less obvious but then the bottom of the mirror wasn’t cohesive to the top as there were no definitive rope lines. Bad, Bad, Bad. 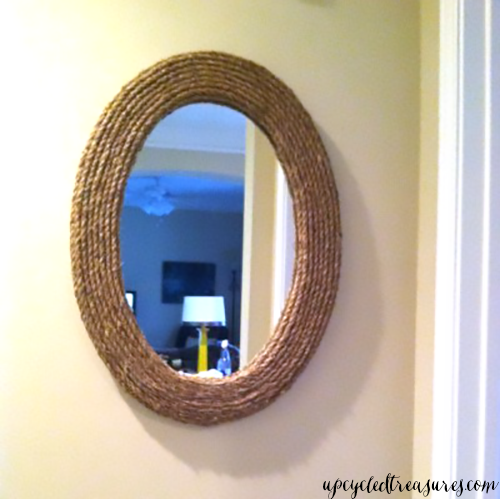 So I ended up using needle nose pliers to take the little woven pieces of rope out and just wound the rope around the frame to cover up the seam instead. I also glued a small piece of rope to the top of the back to make it “appear” as though it would be hanging from it. So the mirror is actually hanging from the picture hanging wire but then I made it look like it’s hanging from this glass knob – I would like to maybe change it out to a dock cleat in the future but didn’t have one of those around and liked the contrast the refined knob gave the rugged rope. 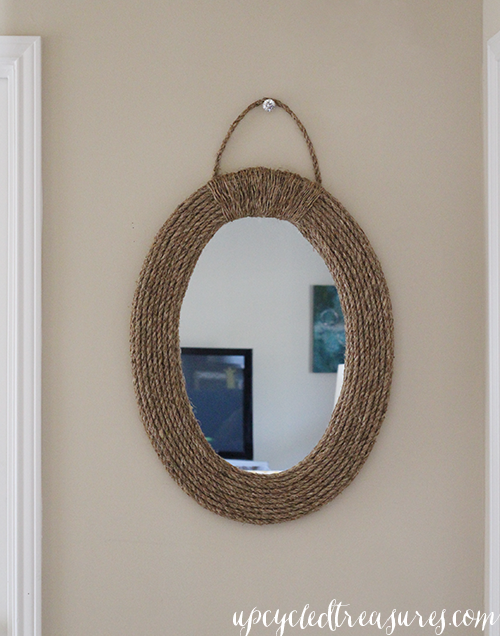 Now that I completed my first project I kinda want to start gluing rope to other random projects around the house {Update: Check out my Rope Lamp Shade Here and Rope Candle Holders Here}. My husband is in Boston for work right now so hopefully he won’t freak out too much if he comes home to find I’ve covered the couch or his PS3 in rope, just for fun. haha. Don’t worry Eric I wouldn’t do that… not to mention I don’t have enough rope leftover 😉

Here is an updated photo of my DIY rope mirror hanging up on our new living room gallery wall. I decided to hang it up by the wire on the back, rather than from a knob this time. Although the rope handle is still attached in case I change my mind later 🙂 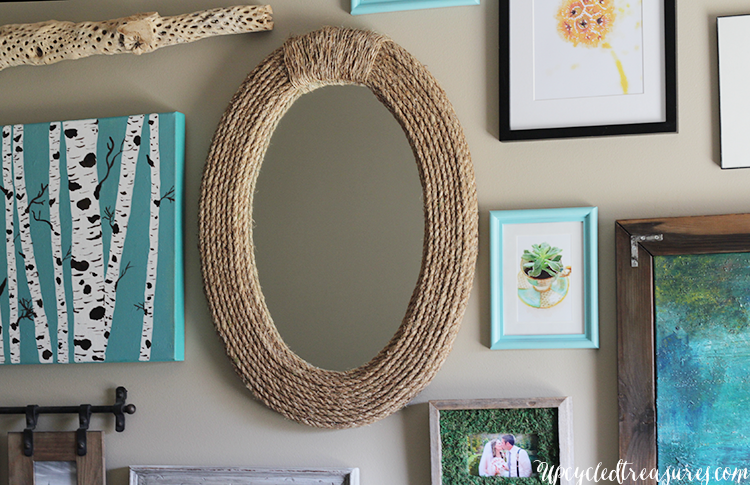 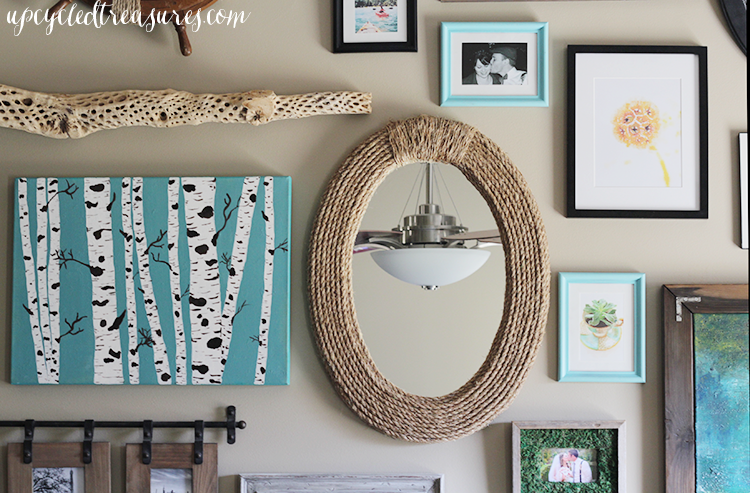 So what do you think of the DIY Nautical Rope Mirror? 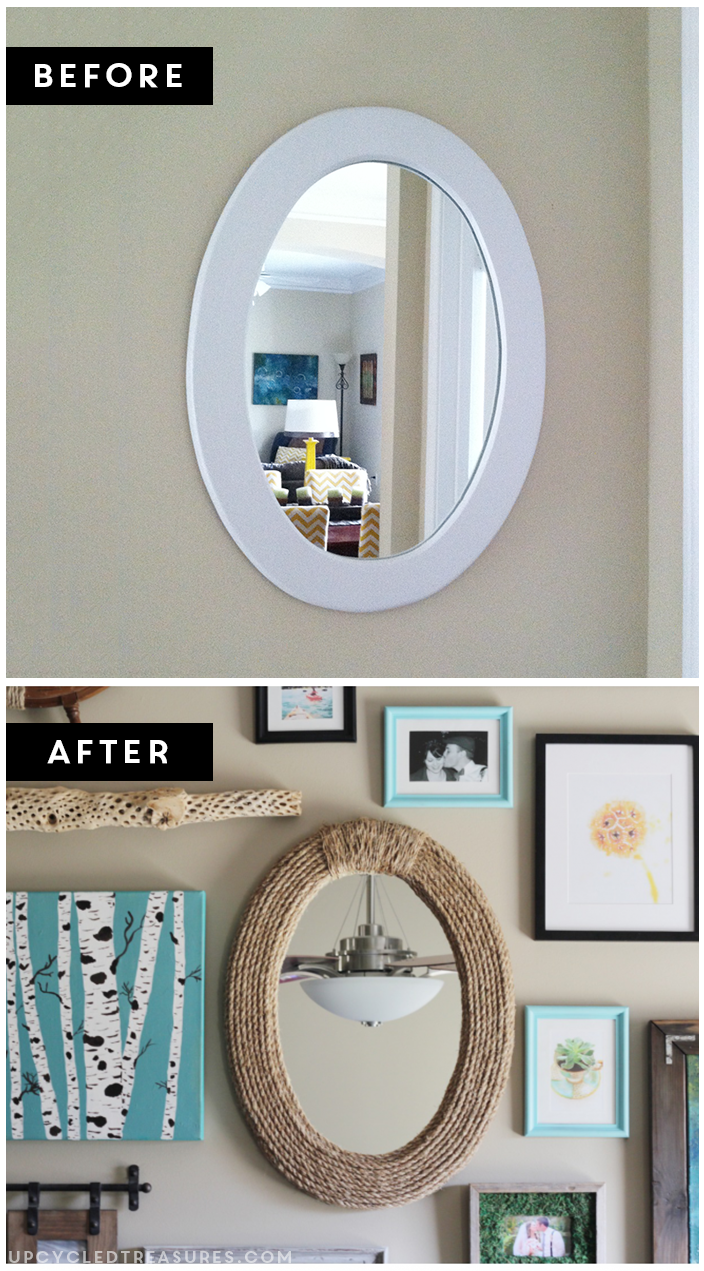 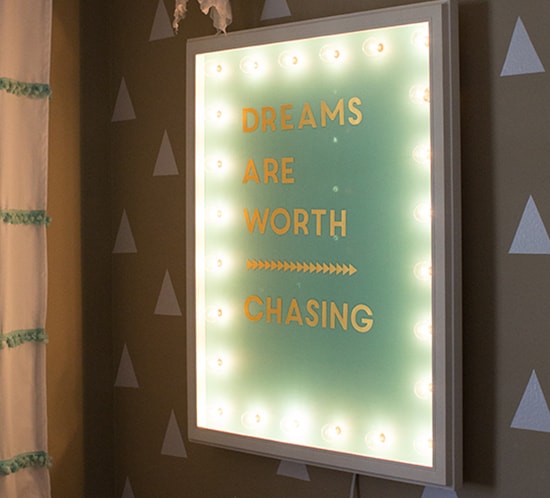 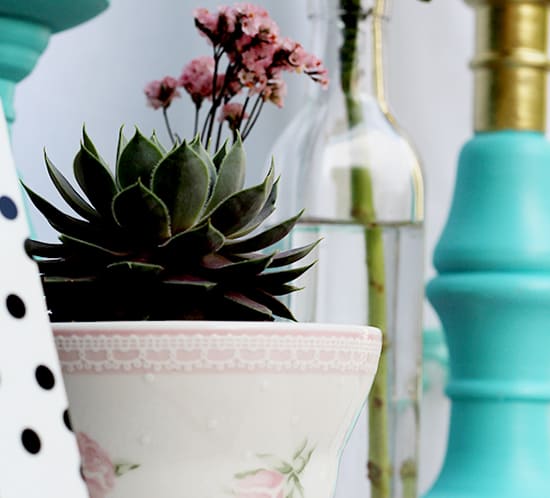 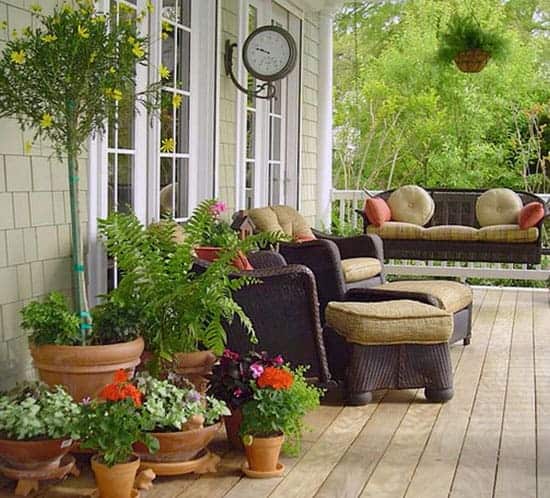