Well, I decided it was time I make my own Ryan Gosling meme after thinking twice about a hub cap I saw on the side of the road, ha. I hope you had a great weekend! I don’t know if you are a fan of Game of Thrones, but all I can say about last night’s episode is WOW. In fact, I feel like my heart is still beating fast from it all. Don’t worry, I won’t spoil it for anyone who hasn’t watched it yet, but I will say that I LOVE that show and really need to start reading the books. I don’t watch too many shows so I’m really sad that there is only one episode left for this season.

It may seem lame but the only shows I do generally watch are The Bachelorette, The Big Bang Theory, and Game of Thrones – and then anything HGTV<– it’s the only channel I know by heart. I like to record shows I think I may watch { I swear I’m going to watch those 50 episodes of Antique Roadshow someday!}, but since I don’t really have time {or would rather be doing something else} Eric ends up deleting them because we run out of space.

Truth is, I know there are TONs of good shows out there but don’t like to start them because I know I will likely get sucked in. Is anyone else that way or am I just weird? I know it’s weird to my fiance who has a Bachelor’s degree in Screenwriting and is obsessed with movies and sci-fi shows.

Upcycle a Ship Helm into a Nautical Wreath

Well enough about TV because I’m so excited to show you my new nautical wreath! After posting so many wreath roundups, I figured it was time I get my own. I decided to upcycle a ship helm {ship wheel} into a nautical wreath because I wanted to do something different. You will probably either love or hate this idea, but I think it’s pretty neat. 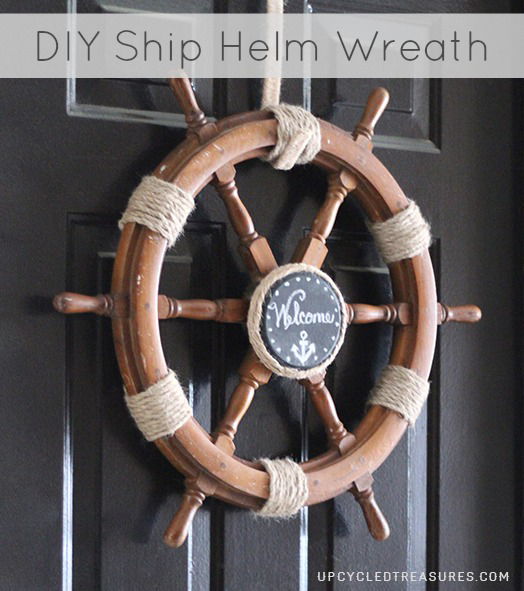 As you may already know I am obsessed with all things nautical. And rope. Lots of rope. In fact, I often refer to myself as a rope-aholic. Well, this project incorporated my 2 loves and I already had nearly everything I needed. Aside from needing a small round piece of wood I also needed some white chalk. Of course, I had no idea that it would take trips to 3 different stores before I would find white chalk. Seriously.

You would think that with chalkboard projects being so popular, and chalkboard paint being sold everywhere, that white chalk would be available nearly everywhere. Of course, that could also be why it was so difficult to find. JoAnne’s was out but they did have a white chalk marker {which broke when I shook it – awesome} and Walmart only had colored chalk. Luckily Target saved the day with a 32 pack of white and colored chalk for under $1.

So we had 3 ship helms hung up in our bedroom as wall art, and while laying in bed the other day I came up with the idea to use one as our summer wreath. I bought 2 of them at HomeGoods a while back and one from an awesome antique store here in Georgia, Rust ‘N Dust. I love how authentic and imperfect this one is and that’s why I decided to use it for our nautical wreath.

Here is my display of ship helm wall art – before I transformed one into a summer wreath. Oh yeah, and those are some more tablecloth curtains. 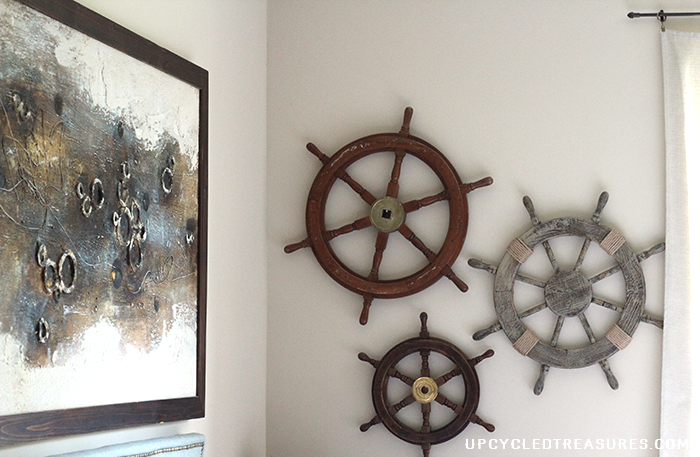 I knew I wanted to add sections of rope to the helm to give it more interest, but all I had was sisal rope and jute twine. I didn’t think the texture or color of the sisal rope complimented the ship helm so I ended up twisting 4 pieces of jute twine together instead. I then wrapped 6 sections of the helm and you can see 2 sections completed in the photo below. 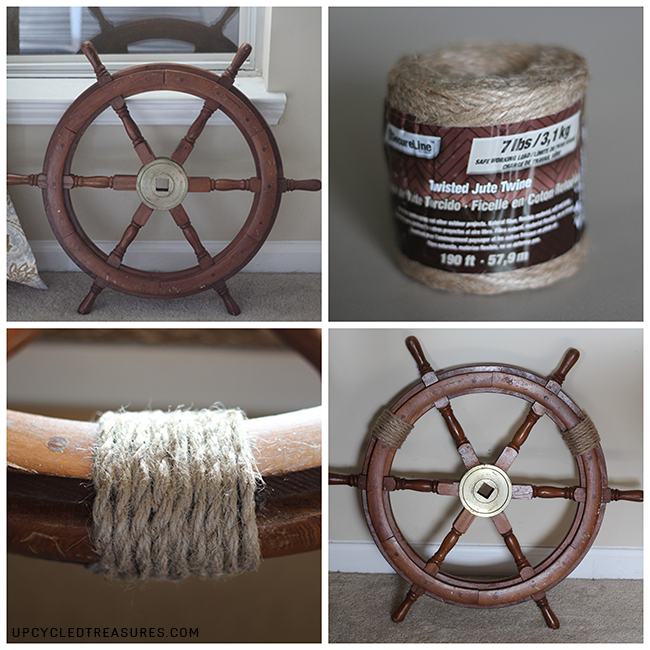 After all the sections were completed I sprayed a round 5×5 piece of wood I had picked up from JoAnn’s with some chalkboard paint. 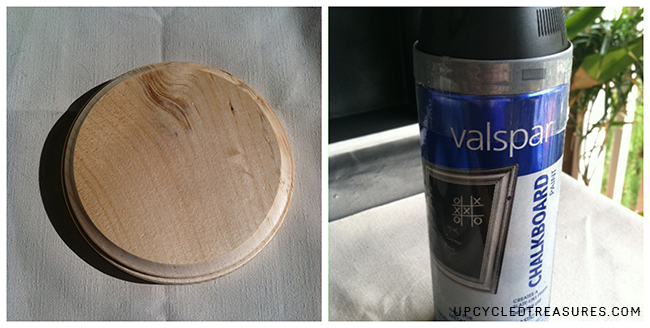 I don’t have photos of every step, woops, but after the chalkboard paint was dry on both sides I added some twisted jute twine around the edge with my glue gun. Then I added a couple magnets to the back of the round piece of wood – the middle of the ship helm is metal so it didn’t need any magnets. I decided to use magnets rather than just glue it straight on because I wanted the wood piece to be removable.

Besides, this way it’s easier to write whatever you want with chalk OR you can leave it off, turn the ship helm around and hang it up on the wall. I also added the jute twine to the wreath door hook.

Side Note: If you decide to do this I would recommend leaving the part that goes over the door “rope-less”, otherwise it may be a little more difficult to open and close the door.

Here is the my new nautical wreath all finished and hanging on our door. I definitely don’t have the best handwriting, but you get the idea. I just love the way it turned out, although I can’t wait until we have a house with a nice front porch to display it on. What do you think? I feel like this would look great at a coastal cottage or beach house. If you don’t have an extra ship helm laying around, be sure to keep an eye out at stores like Home Goods. I have a feeling we will be seeing more manufactured ship wheels as summer approaches. Antique shops and online stores like Etsy are another great resource for finding vintage ship helms. 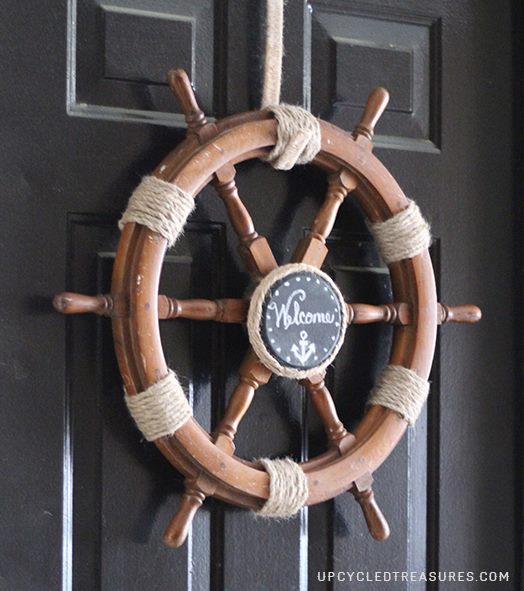 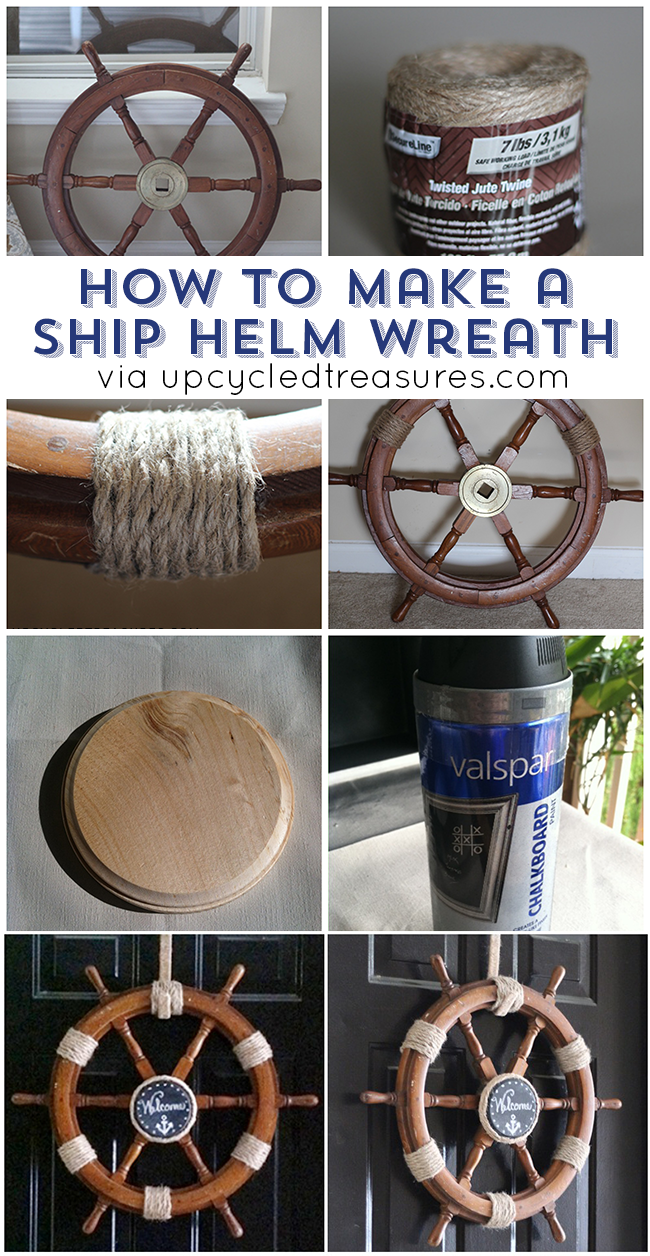