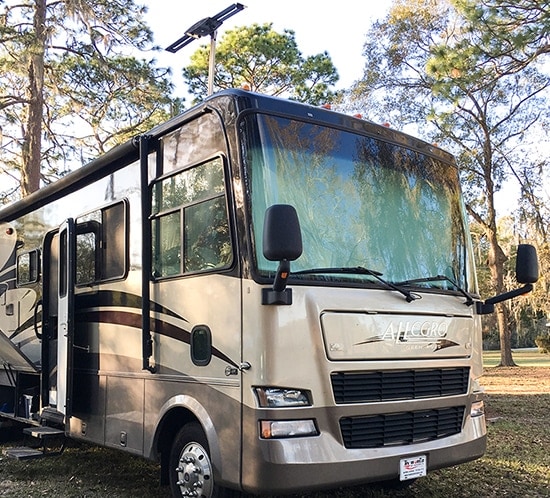 How To Watch TV Shows and Movies On The Road 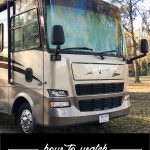 For those that don’t know I gained my Bachelor’s Degree in Film and Video Production and went on to work in the entertainment industry for about six years. While I thoroughly enjoyed my time in the industry I’ve since come to realize the passion that drove me to it revolved solely around a good story.

I’ve always enjoyed understanding how others live their lives and why they make the decisions they do. So you can understand why it’s extremely important for us to have options that will keep my need for a good story taken care of.

How To Watch TV Shows and Movies On The Road

We’ve tried different options for TV entertainment while in our RV. Some have stuck with us while others have fallen away, today we wanted to give you an idea of the ones we enjoyed.

Check out our video on how we watch our favorite TV shows and movies on the road.

Update: Using our Firestick has made a HUGE impact on how we watch our favorite shows and movies. Not only does it make our favorite Apps, like those mentioned below, easier to navigate, but the internet tends to work better. 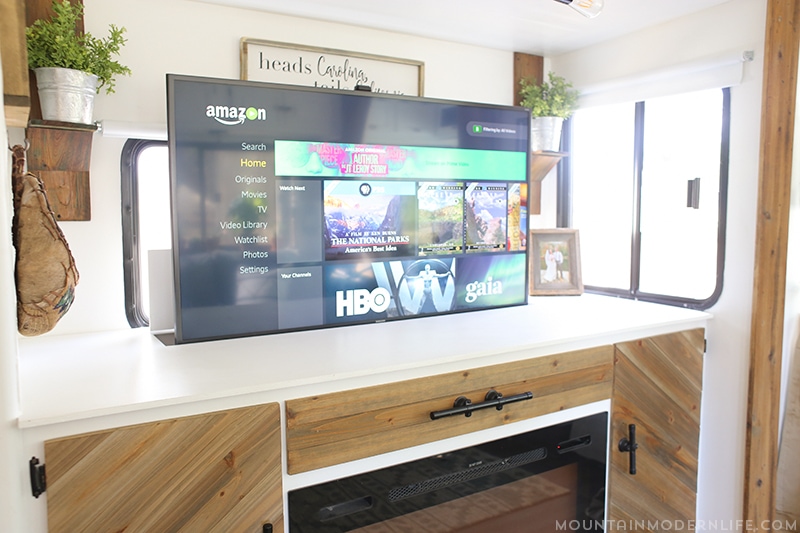 It still shocks me every time I speak with a family member or friend that hasn’t heard of or isn’t using Amazon Prime. Though I have to admit just over a year and a half ago I was in the same boat. You see we actually signed up for it due to the 2 day free shipping because we were ordering from Amazon all the time. Shortly after signing up we realized the advantages of having access to the video section.

What comes with it –

As you can see, there are a lot of advantages to Amazon Prime beyond movies and tv shows, but our focus today is on the entertainment aspect.

The first bullet point mentions the thousands of movies and TV shows you gain access to, which is nice. Some may ask, are the shows and movies included any good? The short answer is yes, they have good movies, TV shows, and documentaries available that could keep you entertained for a very long time. But they also have other options, which is probably my favorite part.

Let me dive in a little deeper. When you access Amazon Prime for watching TV shows, movies, and documentaries they’ve a ton of different categories, the ones that are included with Prime say exactly that “Included with Prime”. This feature makes it easy for you to scroll through options already available with your subscription.

The really cool thing is they also have sections labelled “Rent or Buy”. You can rent or buy newer movies, as well as TV shows. For instance we occasionally purchase episodes of The Walking Dead which are $2.99 a piece. That’s a reasonable price for us, but you can also purchase the entire new season for a better discount.

It doesn’t end there though, you’re also able to subscribe to different channels for a monthly fee. One channel we subscribe to is the Gaia channel for $9.95/month. Gaia is a channel that focuses all of their movies, tv shows, and documentaries on self improvement and spiritual development, such a great channel. We’re also currently subscribed to HBO which gives us access to all HBO programing for 14.99/month.

You may think you’d quickly add up to a large monthly bill, well that can happen but another nice aspect is you can toggle your subscriptions anytime. If you have a channel one month but don’t feel you need it the next you can turn it off and the channel will run it’s current course then no longer be available once the time period you paid for is up.

My favorite part of Amazon Prime is the options and flexibility it offers, and is probably the main reason it tops my list of must have entertainment options while on the road.

But there are other options. 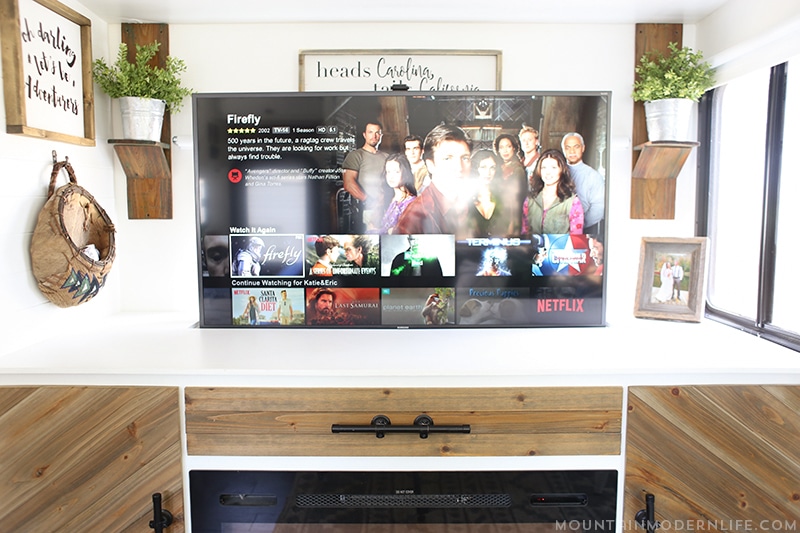 You’re probably familiar with Netflix, I’d bet if you aren’t currently subscribed as a member you once were. You may have even went back and forth a couple of times, at least that’s what Katie and I did. At this stage though Netflix has made it’s way onto our list of indispensable entertainment options.

Like I mentioned above you’ve probably heard of Netflix and more than likely have been a member at some point, so you know how it works. But what Netflix has been doing recently is what’s made it indispensable for me.

What really has me hooked on Netflix is their original TV shows. Wether it’s Stranger Things, The OA, Troll Hunters, or even Daredevil they are creating great shows. And I didn’t even mention House of Cards or Orange is the New Black which I haven’t even had the time to watch yet, but I’ve heard great things. For me their shows do such a great job at building individual character development along with group development.

But the main thing that insures my appreciation for Netflix is their decision to keep Firefly for so long. If you decide not to go with Netflix you should go get Firefly regardless :).  Seriously though, it’s my favorite show of all time and unfortunately got cut short and only has one season, but the following was so huge they came out with a follow up movie called Serenity which wraps up some of the story.

Check them both out. 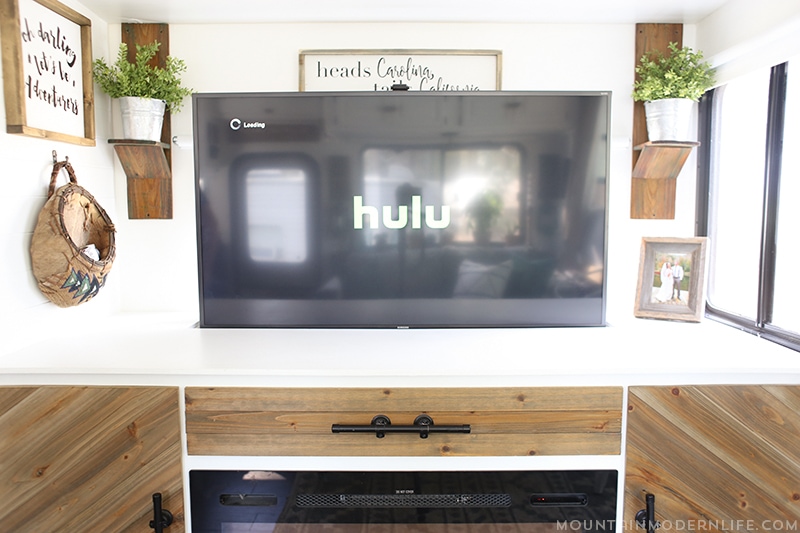 Just like Netflix, we’ve had an off and on relationship with Hulu. We still have a lot to learn about how it works and if it’s a service we’ll stay with, but for now we’ve been pleasantly surprised.

Hulu – One Week Free Trial – $7.99 or $11.99 a month after free trial week (difference between price points is commercials).

As mentioned above we’re still new to the Hulu experience and will be figuring out more as we go along. So far though, we have really enjoyed using it to catch up on current episodes of Modern Family, as well as watching a couple of movies from their selection.

I wasn’t to familiar with Hulu’s movie library and assumed it may not be as large as other options out there. You see I’d developed an understanding in my head that Hulu was primarily a TV show option, I was wrong. Though that’s the main way we’ve used it.

The other night when I was sick I spent a decent amount of time looking through their movies and was pleasantly surprised by the selection they have. Just another reason for us to hold onto it a bit longer.

While they have great TV shows and movies, it’s going to take some time before we decide if Hulu will become a part of our staple entertainment group. Though at this point Amazon Prime and Netflix are our favorites and seem to be enough. 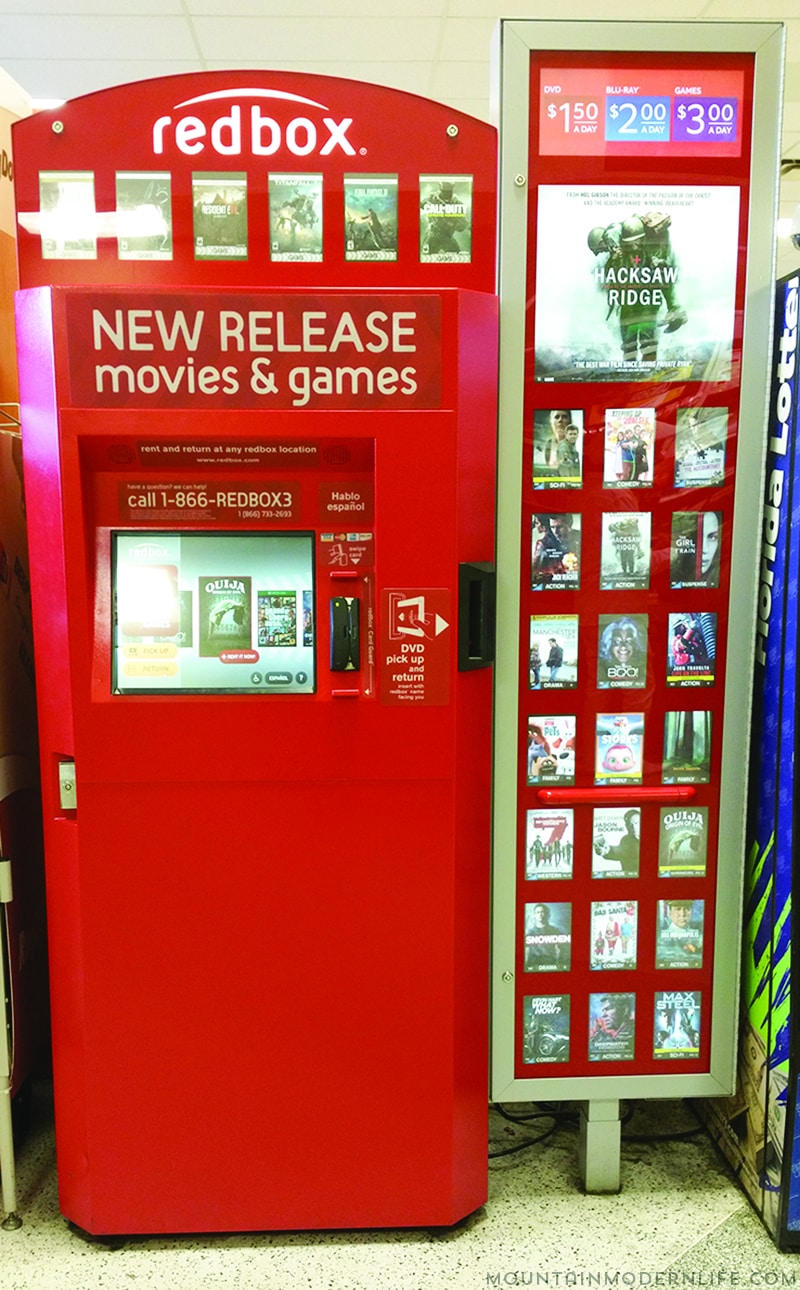 I’m sure you’ve seen these boxes at your local grocery store, Walgreen’s, or even Walmart (though they’re blue). If you haven’t went ahead and given them a try you most certainly should.

Redbox has become one of our staples. When I was in film school, and even further back when I was in High School I loved going to Blockbuster. I would cruise up and down the isles looking for the hidden gem I’d never seen or the newest blockbuster movie to be released. While I can’t get quite the same experience with Redbox I’m able to look through their selection and see what’s new.

About once a week I’ll run over to the Redbox and look through their options, more often than not I come home empty handed though I still enjoy the trip. They also offer video game rentals which is an added perk, though I don’t generally go that route.

One of the coolest things about it is the fact you can return what you rent anywhere. With us traveling it comes in handy to be able to return the movie or game at the next stop on our journey versus needing to make sure we return it before we leave.

If you haven’t taken the leap to try Redbox I’d suggest you go ahead and do it, you won’t be disappointed. 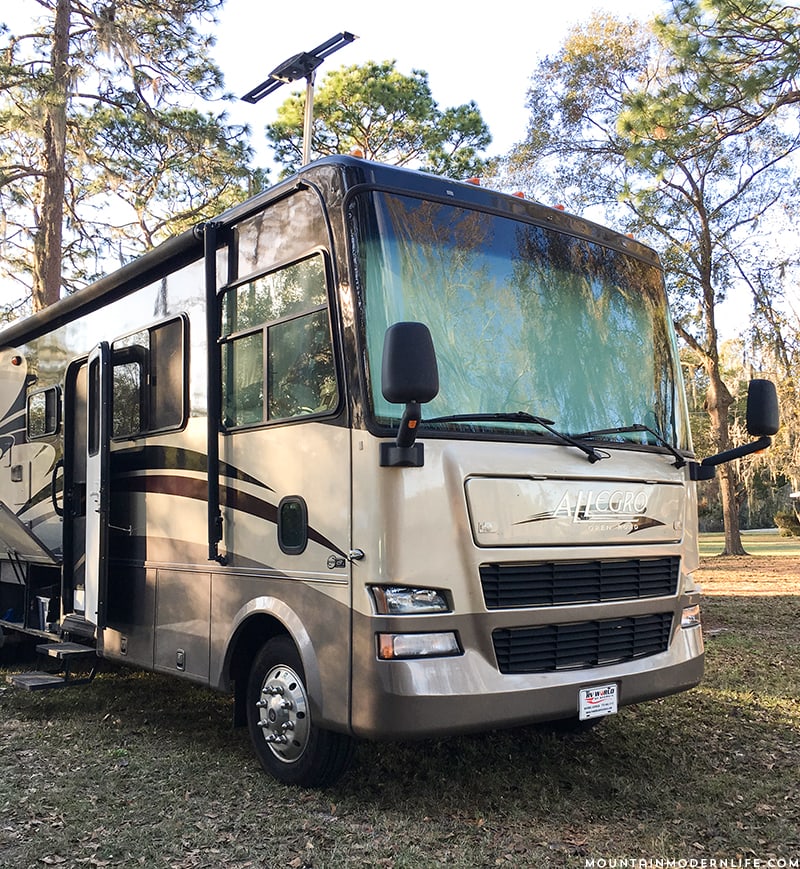 Katie and I went years using cable TV, during that time I think we tried every cable provider. We didn’t try them all by choice but mainly because we had to use whoever we could wherever we’d move. But during all of that time we never thought about using a standard over the air antenna. Well now that we’re on the road and not wanting to commit to something like DirecTV we are sure glad we have our antenna.

Antenna – Should be on board your rig – if not you can check out these indoor antennas.

It’s funny because while we were in Wisconsin we didn’t even raise the antenna. For some reason I had it in my mind that our antenna didn’t work. Once in Florida my mom scheduled a family reunion which happened to fall on the same day as the Falcons vs Seahawks Divisional Playoff Game. As you guys can imagine I needed to watch that game.

That’s when it hit me, We Have An Antenna!

I cranked it up and found out we were pulling in about 20 channels. To be realistic, I’d say five of the channels were in Spanish and seven of them were duplicates. So really we had about eight channels but one of them was Fox meaning we were all set to watch the game.

It ended up being a really fun day, all of my family came over and we pulled our TV off of the lift in the media cabinet to put outside so everyone could gather around.

Without our antenna we’d not have been able to enjoy the game with all of our family. If you don’t have an antenna I’d consider looking into it even if it ends up only being an interior antenna backup plan.

One thing to note here about watching your favorite tv shows and movies on the road, is that a few of the services listed above require an internet connection. We fully understand that while we’re on the road connectivity can at times be rough, so we frequently use our mobile hotspots. With this being the case it can be important to lower the amount of data being used.

One such way to do this is to go into the settings for whichever service you are using and look for the video quality section. Once there you should be able to select the quality rate at which you wish to watch your movies and TV shows. The lower number (480i vs 1080p) the less data is consumed. Unfortunately, the lower the number the lower the video quality as well, though I think it can be important to save that data once and awhile.

The main thing here is knowing there are options available that can help you slow down the rate at which you chew through your data. 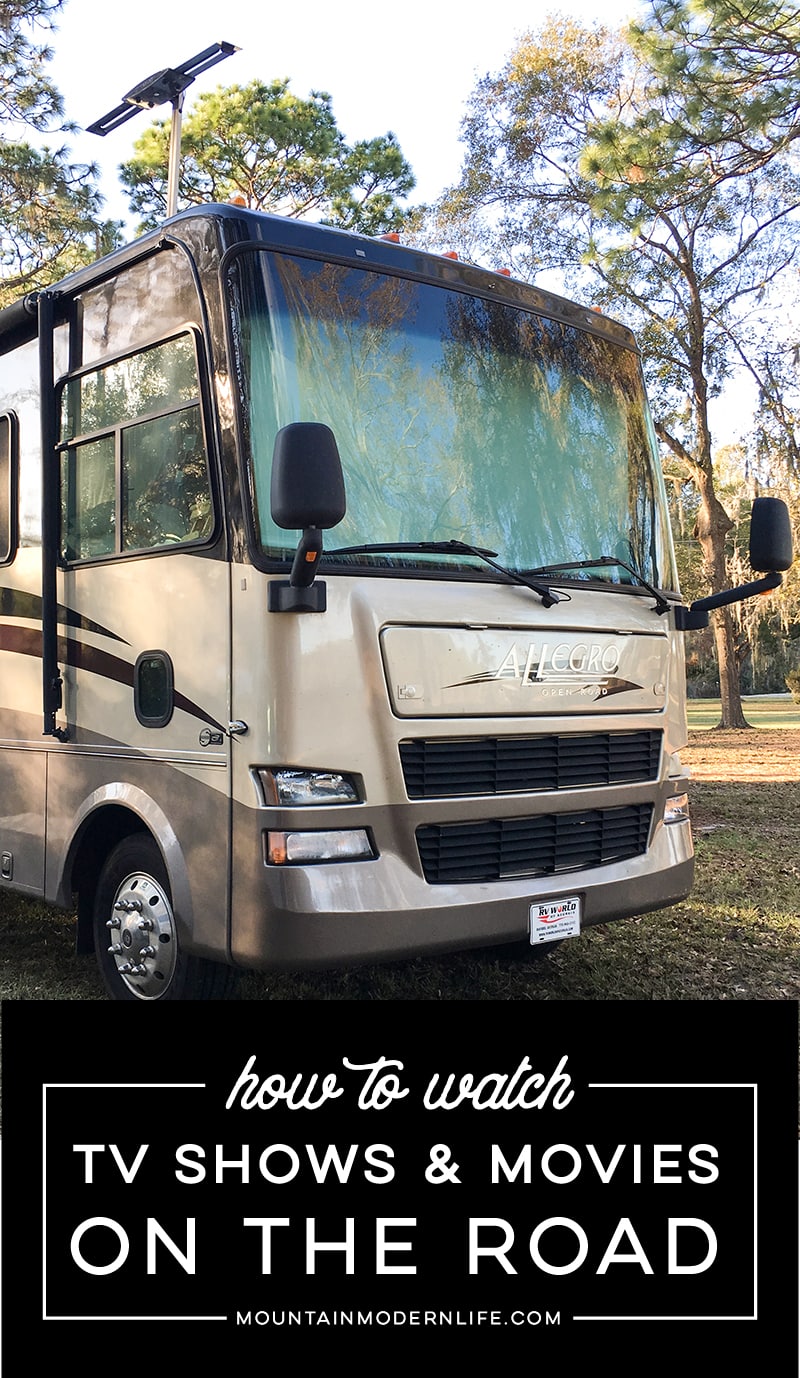