Today I am sharing our new navy dresser with DIY copper pipe drawer pulls, and it seriously makes me happy every time I look at it. 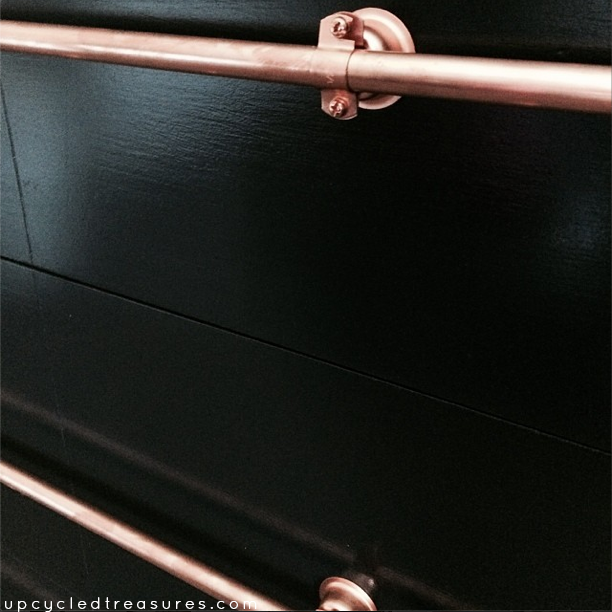 It’s kinda sad but we actually bought this dresser off of craigslist a year ago {yikes!} and it’s just been sitting in storage ever since. The main problem is I was so indecisive when it came to transforming it, so I just let it sit there until I knew for sure what I wanted to do. Do you ever do this?

I know I have taken photos of this dresser numerous times whenever I thought a makeover maybe soon approaching, however, I had issues finding any of those photos. Luckily I did find the original craigslist ad from when I took a screenshot and sent it to Eric to see if we should buy it, haha. 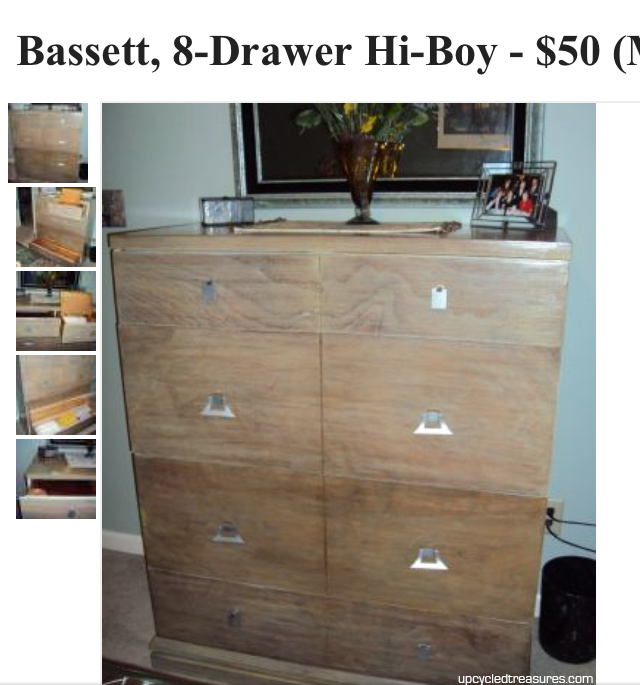 Here is the photo from the craigslist ad. It said it was a basset tallboy for $50, not too shabby, eh? Well as it turns out it’s not a Bassett, and also not 8 drawers. It had 2 top drawers but the bottom 3 are large drawers with 2 knobs each, which makes them look separate.

Even so, I thought it was a great piece of furniture, at a very reasonable price. One of my favorite things about this dresser is the built-in jewelry compartments and cedar-lined drawers.

It was made by Sieling Modern Furniture, a company out of Railroad Pennsylvania that sold most of it’s furniture to NY and Chicago, but was short-lived and went out of business around the ’70s. I really enjoy reading about the history of furniture and this article, {which the photo below is from} was a really interesting read. I also remember reading a while back that the billboard was put up around the 1940s near the railroad and could only be seen by those traveling by train back in the day. Now I can’t seem to find that article but thought it was interesting regardless 🙂 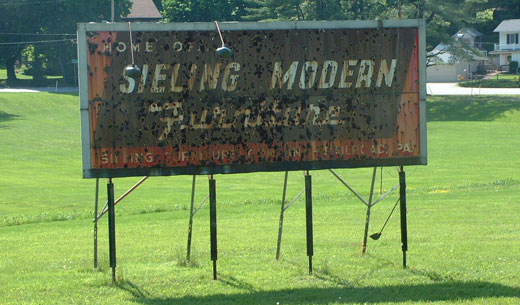 I also found this ad for a job in the Gettysburg Times on September 18th, 1967: 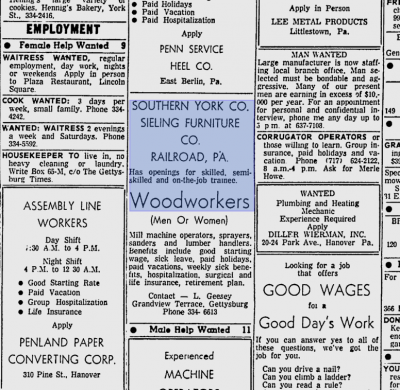 Do you have any Sieling Furniture or know anything about the company? If so I’d love to hear about it!

Okay now on to the Transformation…

So the first thing I did was give the dresser a light sanding, followed by some custom mixed navy blue paint. Afterward, I followed it up with a couple of coats of Polyacrylic. I’ve gotta admit that I generally use wax on painted furniture and use the polyacrylic for wood surfaces, but I like the added luster it gave.

Since the dresser is pretty square I wanted to add some legs to the bottom to give it some added height and character. I purchased a 4 pack of wood furniture legs nearly a year ago {pretty soon after we had bought the dresser} at a True Value store, and based on the packaging I think it may have been there since the ’70s, haha. It was $7.99 for all four legs which was pretty awesome.

I painted the wood with the navy blue paint and then taped them off to paint the bottom with Krylon’s copper spray paint. 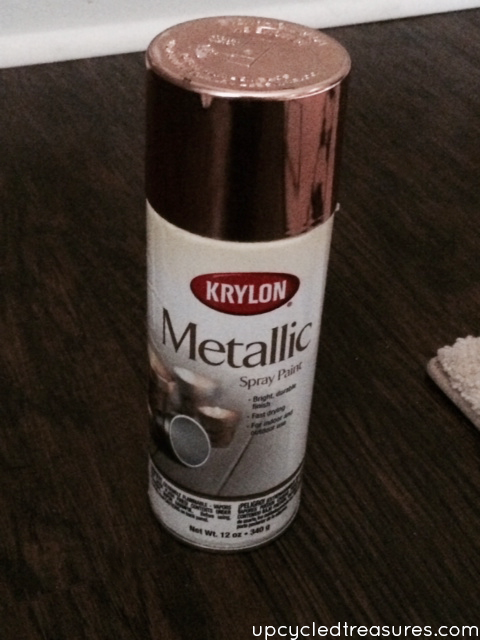 Here is the before and after photo of the furniture feet for our dresser with DIY copper pipe drawer pulls:

I was originally inspired by the whole copper pipe drawer pulls from my friend Brynne of The Gathered Home, who made an AH-MAZING desk with them. However, I knew I wanted my drawer pulls to sit away from the dresser so I browsed the hardware store until I came up with a solution… copper pipe bell hangers! The bell hangers basically hold the pipe in place and allow it to sit off of the drawers.

Overall I’d say the drawer pulls cost us about $28 total since we already had the pipe cutter, bolts, and screws on hand. I knew I wanted to go with longer drawer pulls versus knobs because the drawers are pretty heavy and it was difficult to open them with the type of knobs it originally came with. Plus copper pipes are awesome, amiright? 🙂 We bought a 10 foot 1/2″ copper pipe and then cut it down into sections with the pipe cutter.

I figured this would be a good time to test out the whole cleaning copper with ketchup thing I’ve been seeing. I had read you could mix equal parts ketchup and kosher salt, rub it on the pipe, and wipe it off with warm water, so that’s what I did. I actually removed any gunky stickers first with fine steel wool. The ketchup/salt worked like a charm! I later tried it with just ketchup and it seemed to work just as well.

WOW, did those clean up pretty! I’ve gotta admit that these pipes can get dirty fast with smudgy fingerprints, but I don’t mind. By the way, there was a comment left by Karen that said if you spray clear spray paint on top of the hardware, it will prevent smudge marks and oxidation, so clever! Thanks, Karen!

The bell hangers come with long screws in the center so we replaced those with shorter bolts that fit inside the dresser drawers and added bolts to the other end. Then we simply placed the copper pipes inside the 2 bell hangers and tightened the screws. Sooooo easy!

Update: Check out the full post on these easy DIY drawer pulls here!

For the top drawers, we just used one bell hanger and smaller cut pipes. Make sure you used flat headed bolts so they don’t take up much space next to the pipes. I then added the caps to the end of each pipe for a more finished look. Update: I actually wound up adding epoxy to the caps and then sticking them on the ends to keep them in place. If you don’t mind them being on there permanently, this is a great solution! 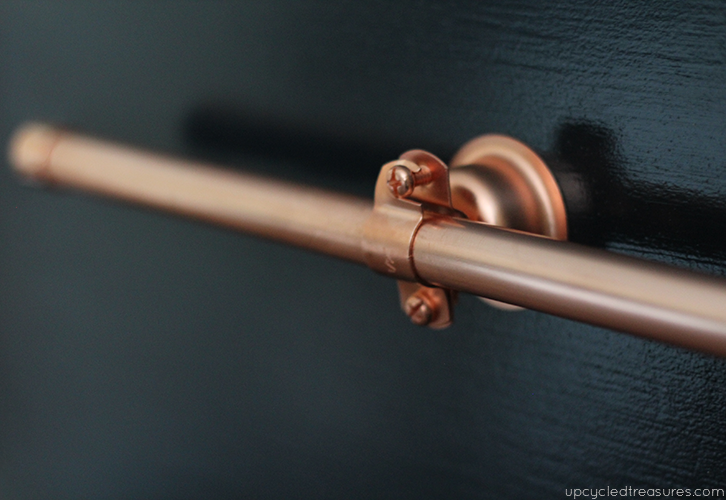 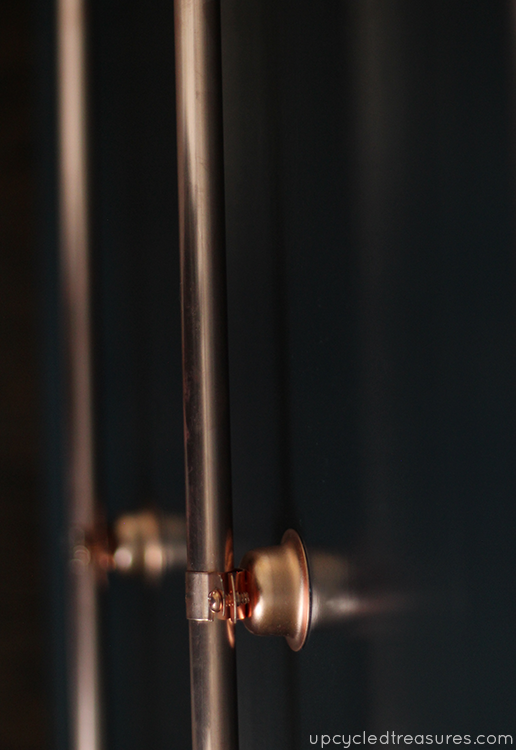 And here she is with the DIY copper pipe drawer pulls all finished! Isn’t she lovely? 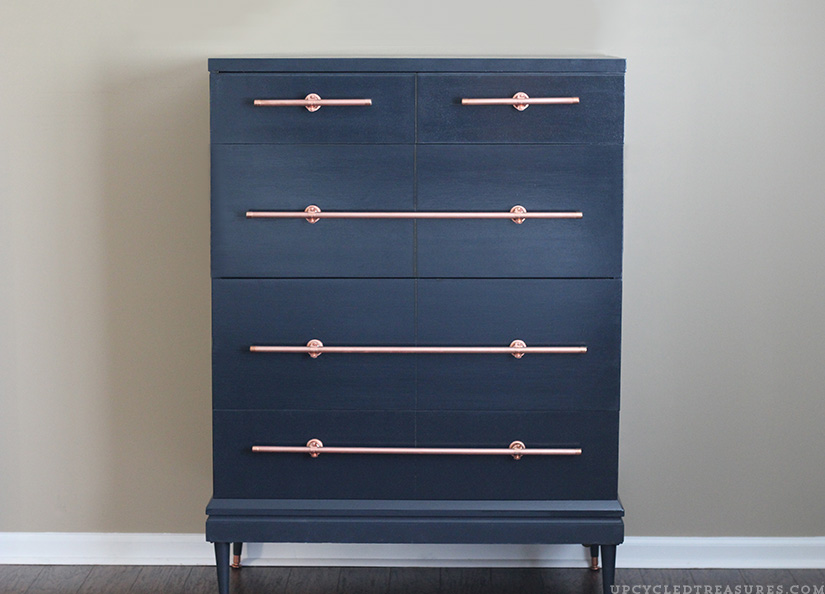 Here is the before and after: 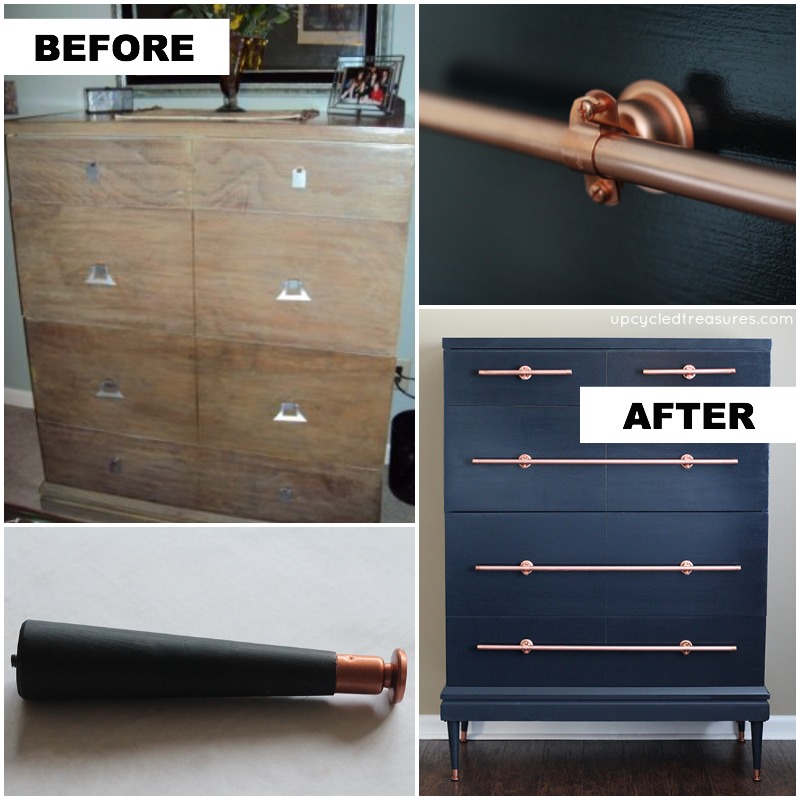 So what do you think of our dresser with DIY copper pipe drawer pulls? I love how the copper next to the navy gives it an almost nautical look. Are you sucked into the copper craze or not so much? I am using gold pipes in my office but was excited to incorporate some copper into other parts of our home.