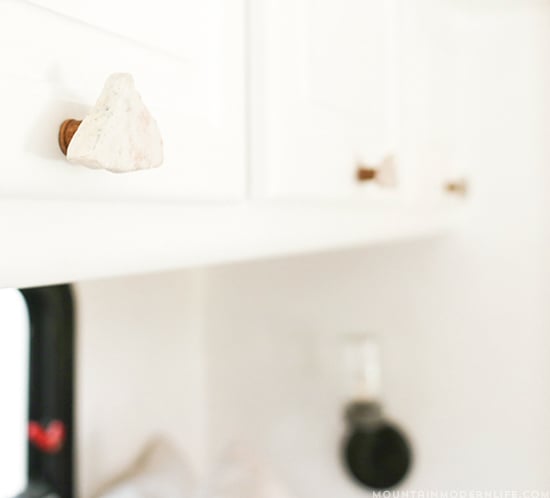 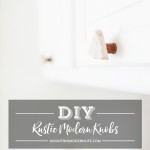 If you’re looking to replace the knobs on a piece of furniture, the cabinets in your kitchen, or maybe even in your RV, you’ll quickly realize how the cost of each knob adds up. Today I’m sharing our rustic modern DIY cabinet knobs, which were budget-friendly AND super easy to make. Whether you’re on a budget, or just looking for ways to add character to a space, I hope this post will inspire you to get creative and bring your own personality into your home. 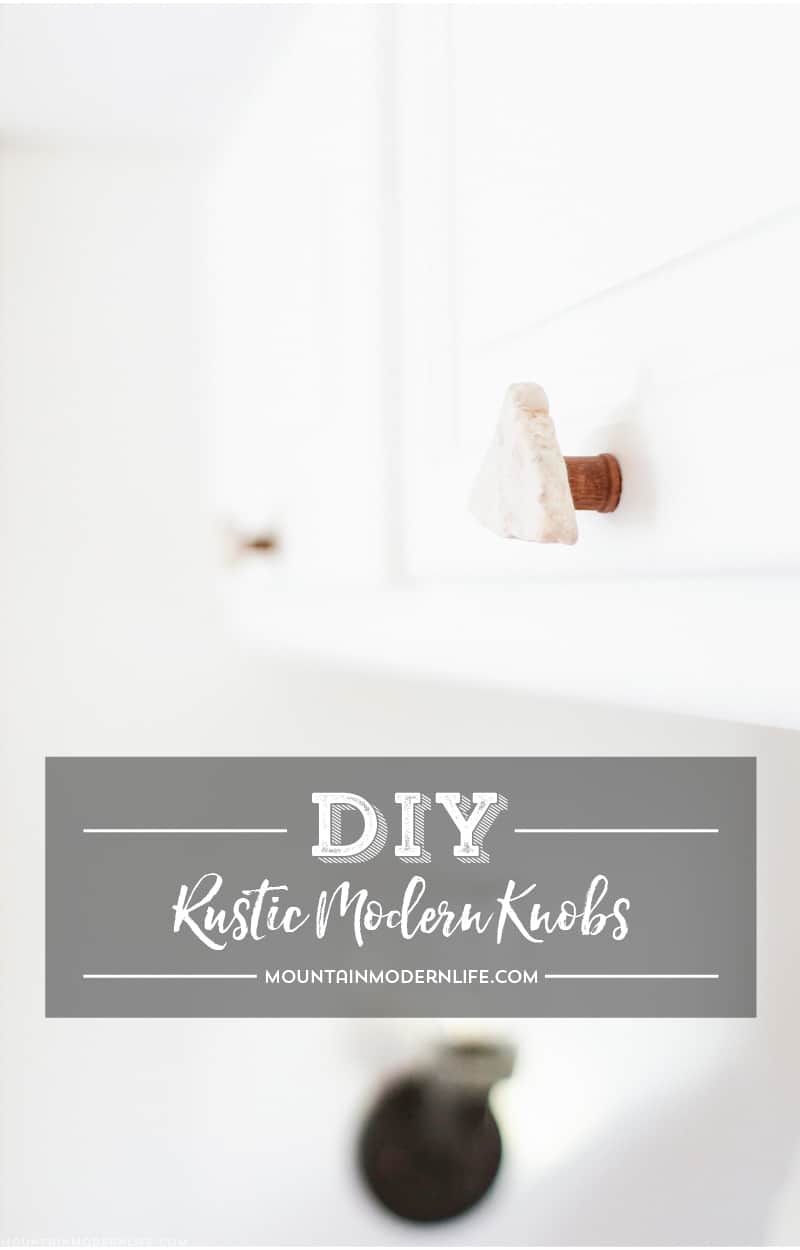 We have A LOT of cabinets in our RV so after painting the cabinets white, we decided the easiest (and cheapest) way to update the knobs was to spray paint them. The truth is, I’m super indecisive and was finding it difficult to make a decision about what type of knobs to use.

Although the black knobs were an improvement to the previous brass color, I knew this would only be a temporary fix since it didn’t bring much personality to the space. I was on the hunt for something rustic yet modern with a more organic vibe. Despite finding a few options I liked, they were more than we wanted to spend once we added up the cost for 10-20 of them. So it was back to the drawing board…

I really enjoyed creating the copper pipe drawer pulls for our dresser and nightstand, which I later used on our custom media cabinet so I figured this was the perfect opportunity to create some new knobs.

After “shopping” our home and garage for some ideas I remembered I had some white slate rocks purchased as bowl filler from Pier One over a year ago. 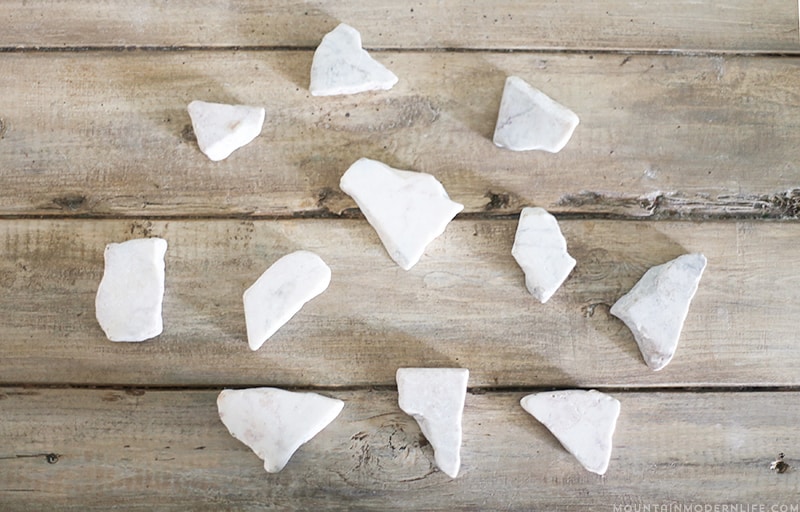 I then recalled seeing knobs made out of spools a while back and with that in mind, I dug through my craft collection until I found a bag of spools I had purchased on a whim, thinking I’d find a use for them someday. Guess that day had finally come. 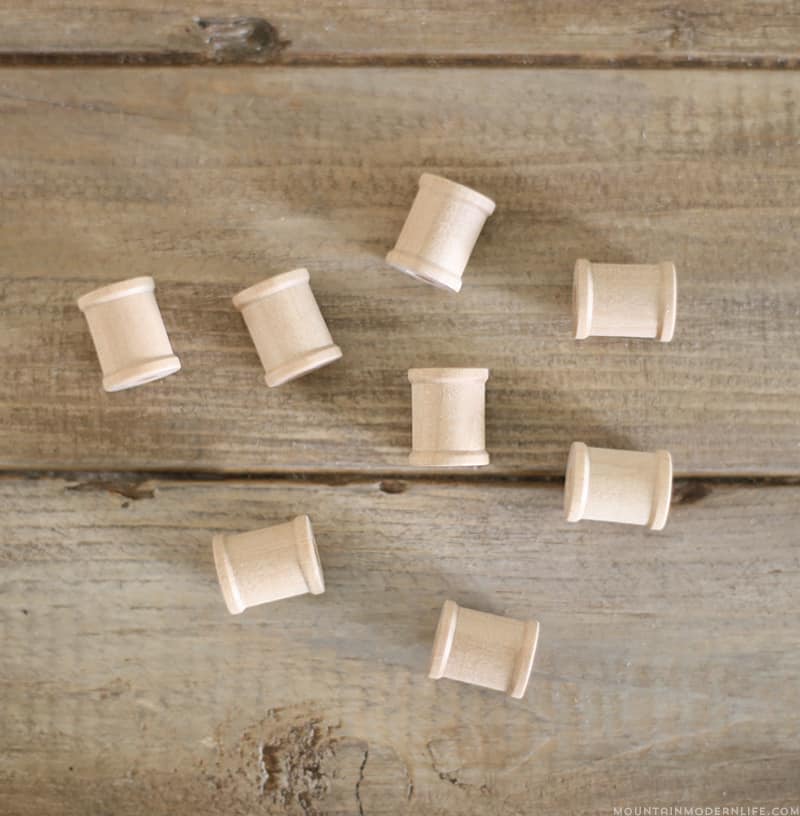 In the end, I created two slightly different versions of knobs, one set was for the bedroom of our RV, and the other set of knobs was used in the front and living room area.

The easiest way to create your own knobs is with a Cap Nut and connecting bolt, or a knob base. I wasn’t able to find knob bases locally, and at the time didn’t realize I could use a cap nut, so here are two alternative solutions I came up with.

You can find cabinet screws with a smaller head so you may want to just use a more narrow bolt, along with some glue and push it inside the hole of the spool.

We decided to drill a small hole for the head of the cabinet screw to rest on. 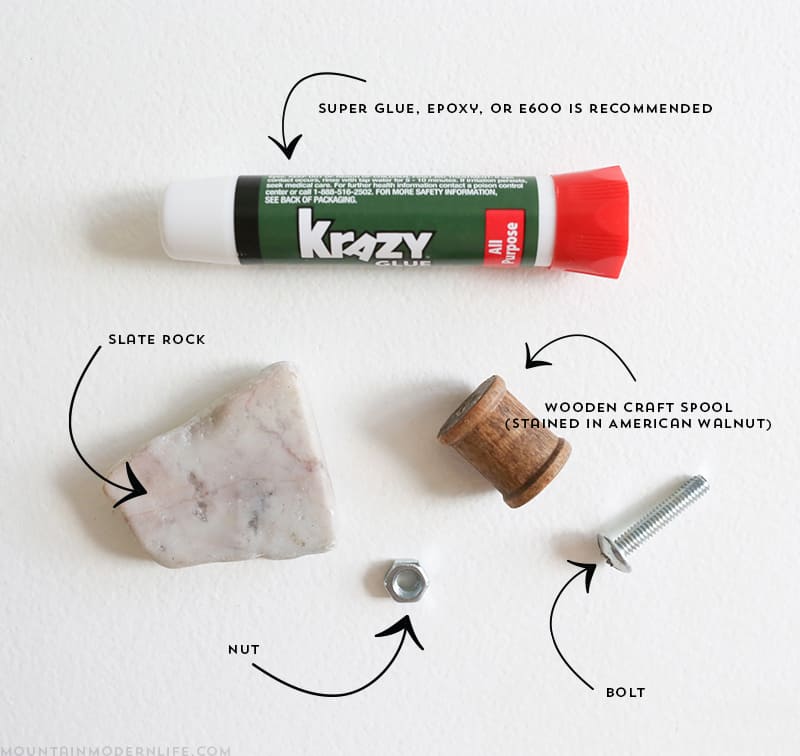 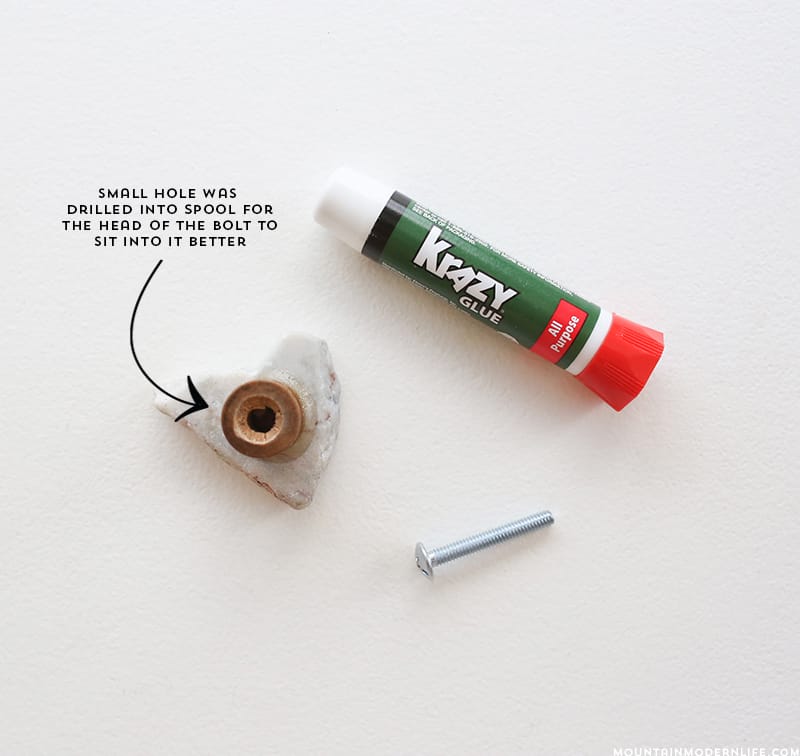 Once the hole was drilled we glued the cabinet screw to the inside of the hole and let it dry for 24 hours. Afterward, we attached it to the cabinet with a nut on the other side of the door.

Here are a couple of photos of the new white slate knobs in our bedroom. 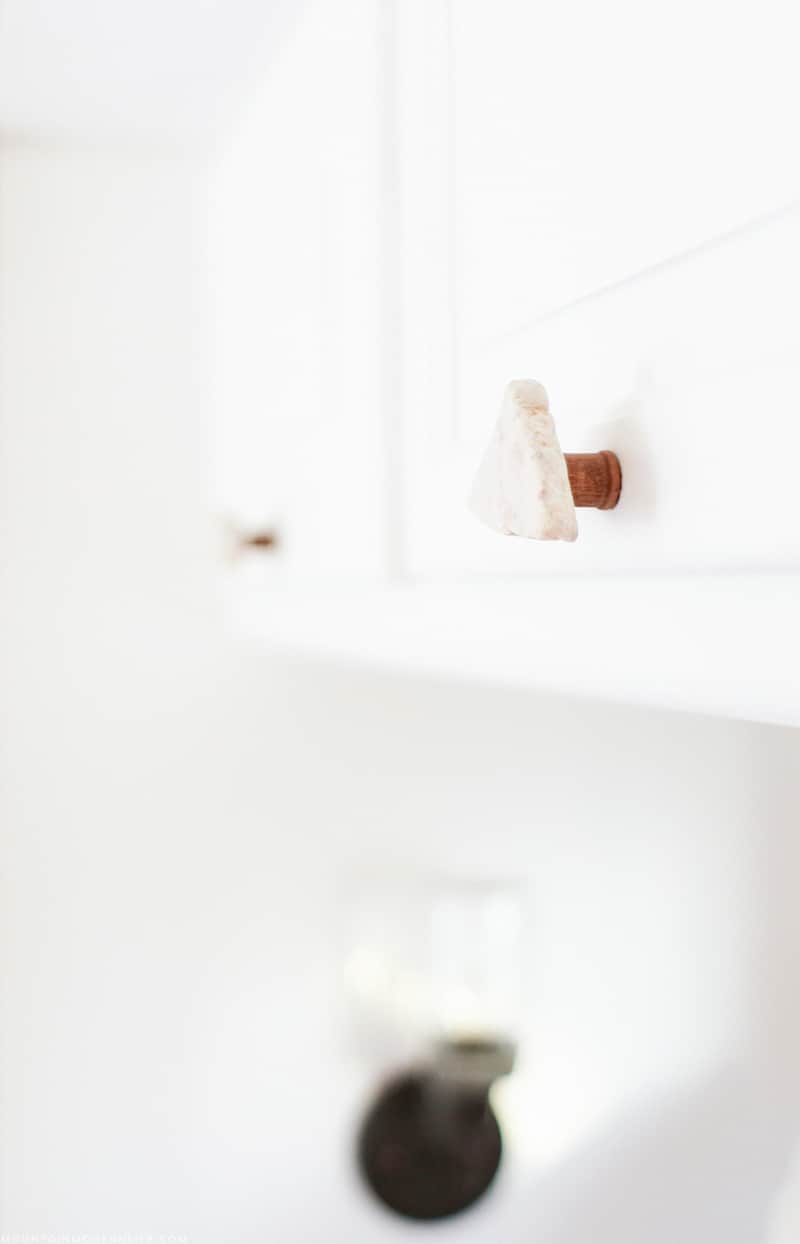 I love the warmth of the wood next to the white slate rock, and that the organic shape of each rock is different. 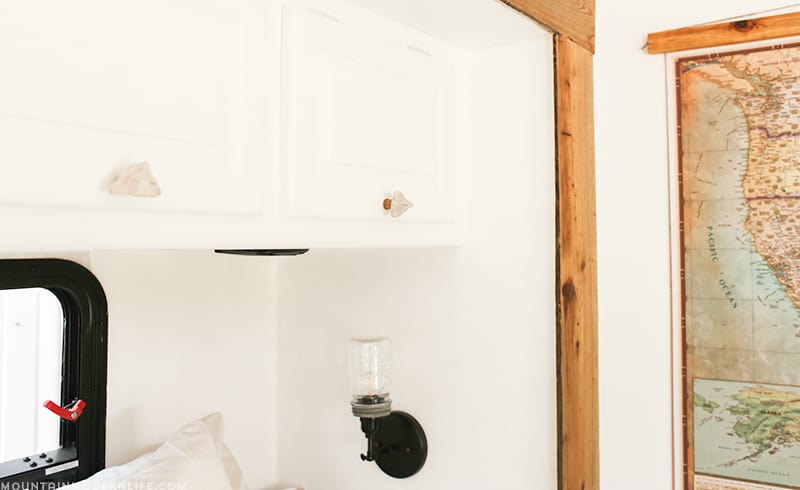 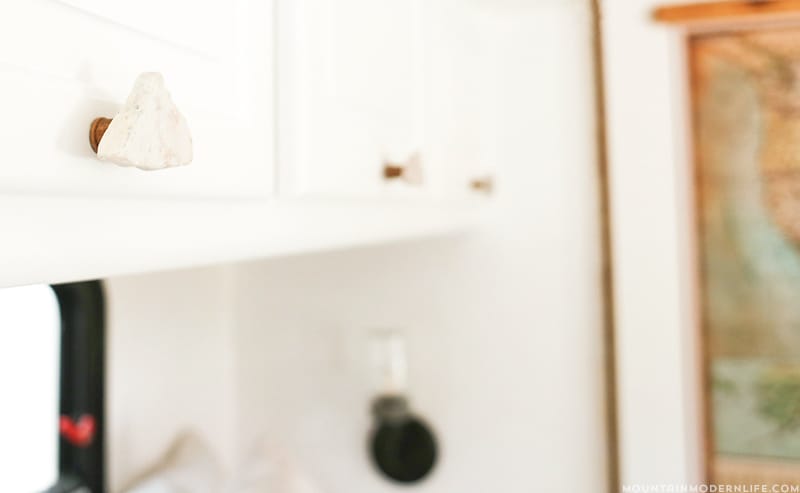 All in, all these knobs were ridiculously easy to make and I love how they look in the bedroom of our RV. For the second set of knobs, I used flat(ish) cabinet knobs instead of wooden spools and gray slate rocks.

These gray slate knobs were created for the front of our RV. I originally planned to use the white slate rocks in the front as well and paint copper on part of them, but I didn’t have enough. Womp Womp. They were no longer available at Pier One, and although I found a huge bundle of them here, here, and here, I preferred the $2.99 price tag of the gray slate rocks from Michael’s. 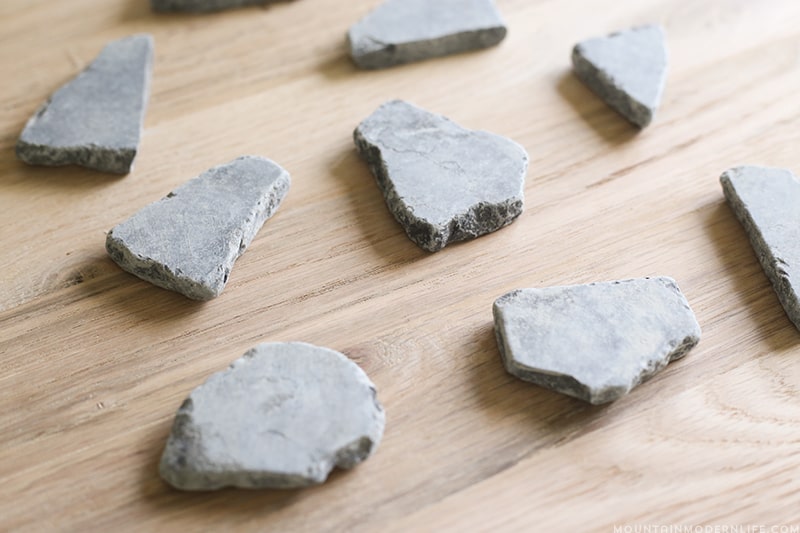 After picking out those that were most similar in size, I taped off a section of the rock and painted it with two coats of leafing finish in bronze. This stuff is like liquid copper and it’s ridiculously pretty. I’m kind of obsessed with it. However, it’s also SUPER runny so be extra careful when working with it. Luckily it’s water-based so it cleaned up pretty easily when I accidentally spilled some on the floor and nearly had a heart attack. 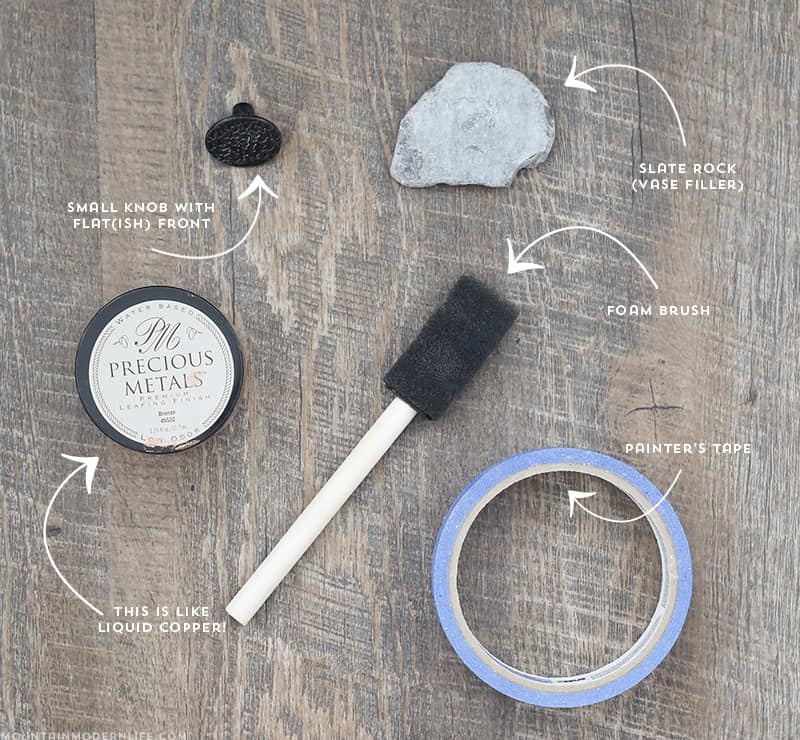 Once the coats of copper were dry I peeled off the tape. Not all of the lines came out perfect but a little light sanding fixed them right up. At this point, you could spray or brush on some sealer. I guess I’m a risk-taker (or impatient) because I didn’t. 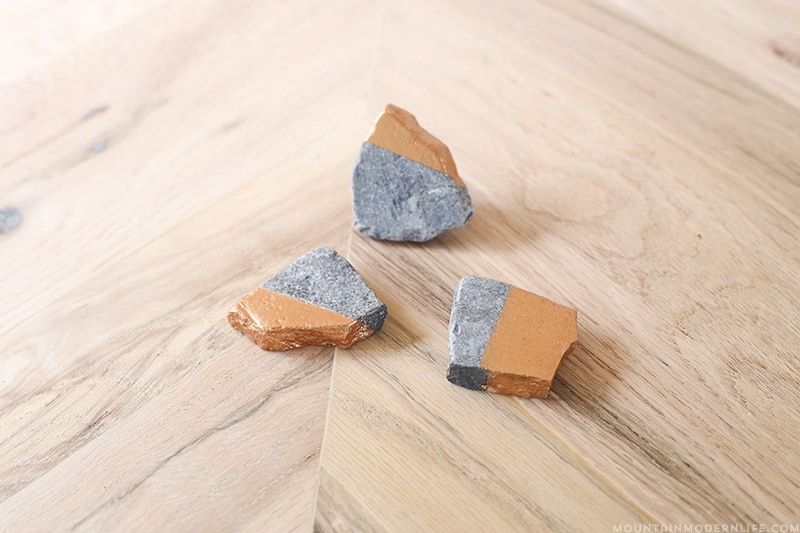 I then attached the rocks to the front of some flat(ish) knobs I picked up for less than $1 each. These knobs came with bolts making them super cheap and even easier to create than the ones with the wooden spools.

I originally tested E600 and a different brand of Epoxy, but a couple of days later some of the rocks came off the knob base. You can imagine how bad this scenario would have been if we were driving down the road while this happened. Luckily we were parked.

I think the heat and humidity inside the RV was melting the glue so I then tried the Gorilla Glue epoxy as well as super glue, and those options have been holding up really well so far. I don’t think you’ll have these issues if you’re installing these knobs in your sticks and bricks home, but if you’ve created your own knobs I’d love to hear about the glue you use! 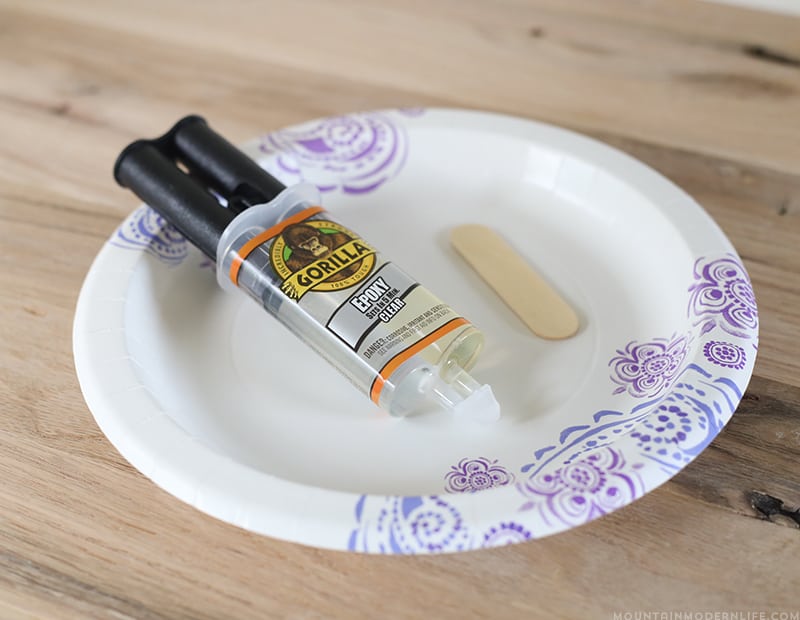 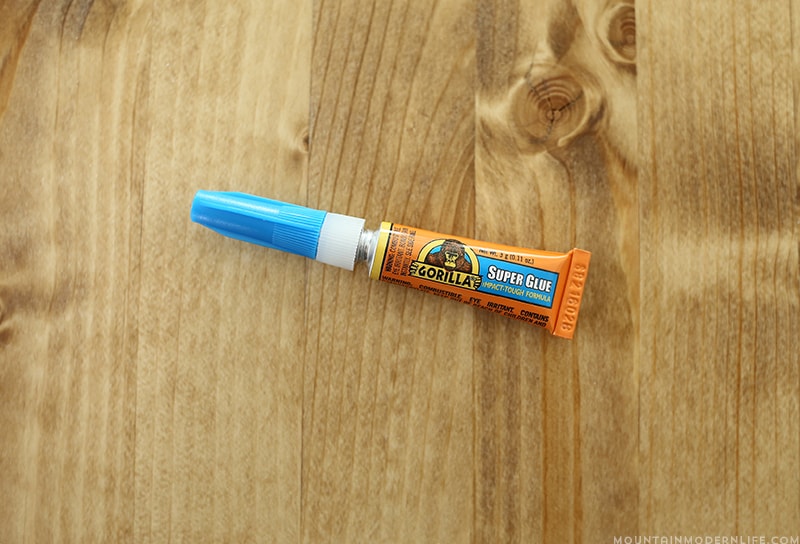 You may have caught a glimpse of these knobs in some of our RV videos or our blinds post, but here’s a photo of them in the front of our RV. 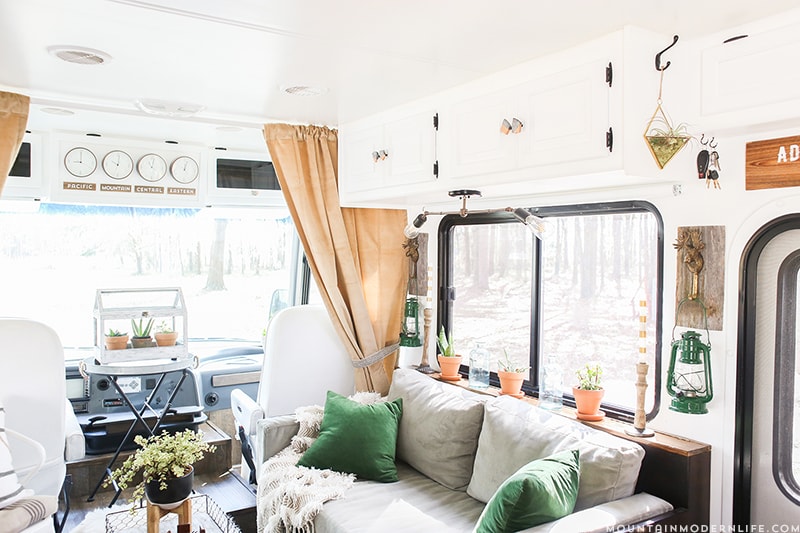 Here are some tips I learned during the process of creating our own rustic modern DIY cabinet knobs.

It’s all about the base

Again, I used wooden spools and flat(ish) knobs for the base of my new knobs, and both worked great. However, using Cap Nuts with connecting bolts, or actual knob bases is another option you may want to consider. If you use an actual knob, make sure it’s smaller than the stone/embellishment you plan to add on top of it.

Not all Glues are Created Equal

I used various brands of epoxy, E600, and super glue and in the end, I recommend Gorilla brand super glue or Epoxy as those seemed to work best. I don’t know if it has something to do with the humidity in the RV or what, but other brands of epoxy and E600 seemed to dry and set but days later would become all gooey and the rocks would fall off. Not fun. I even let some of the knobs sit for a couple of days before installing them and that didn’t help. The Krazy super glue worked pretty well but for some reason, it seemed like the Gorilla super glue worked best, as did the Gorilla Glue epoxy. That’s my experience anyway. If you have any glue tips to share I’d love to hear about them in the comments below!

Since the pack of decorative slate rocks comes in a variety of sizes, some of the rocks were a bit too large. I didn’t mind having the rocks vary slightly in size, but we did chisel a few of them down. We could have avoided this had we just purchased 2 packs of rocks instead of one.

This project was easy on the skill, time and budget and the options are limitless! 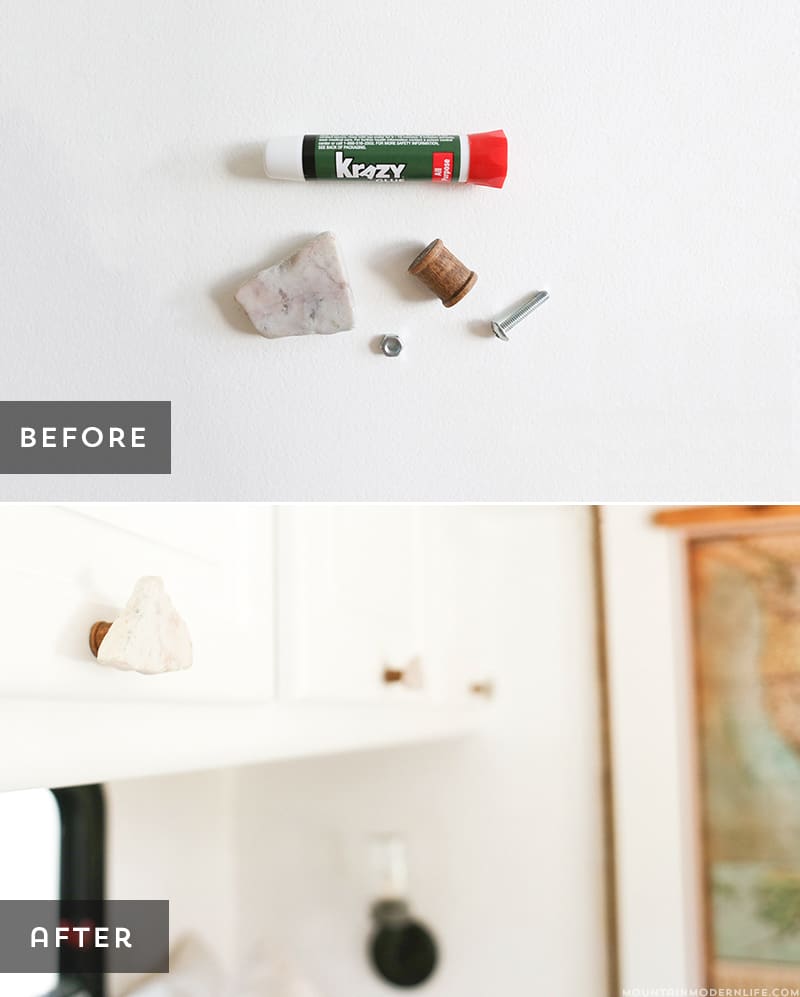 I don’t know if it’s the humidity in the RV or what, but for some reason, I had issues with the white stones coming off on some of the wooden spools in our bedroom about 6 months after making these. I don’t know if this was more of an issue with the glue (I tried e600, epoxy, and two types of superglue), the specific white stones used, the stones being glued to wooden spools that were then glued to the screws, the humidity in the RV, or a combination of all the above.

However, the grey stones in the front of our RV that were glued to the front of metal knobs have held up really well. I recently purchased more of the black knobs and glued the same grey stones onto those for our bedroom – this time using a small tube of Liquid Nails perfect glue. So far so good with these guys. 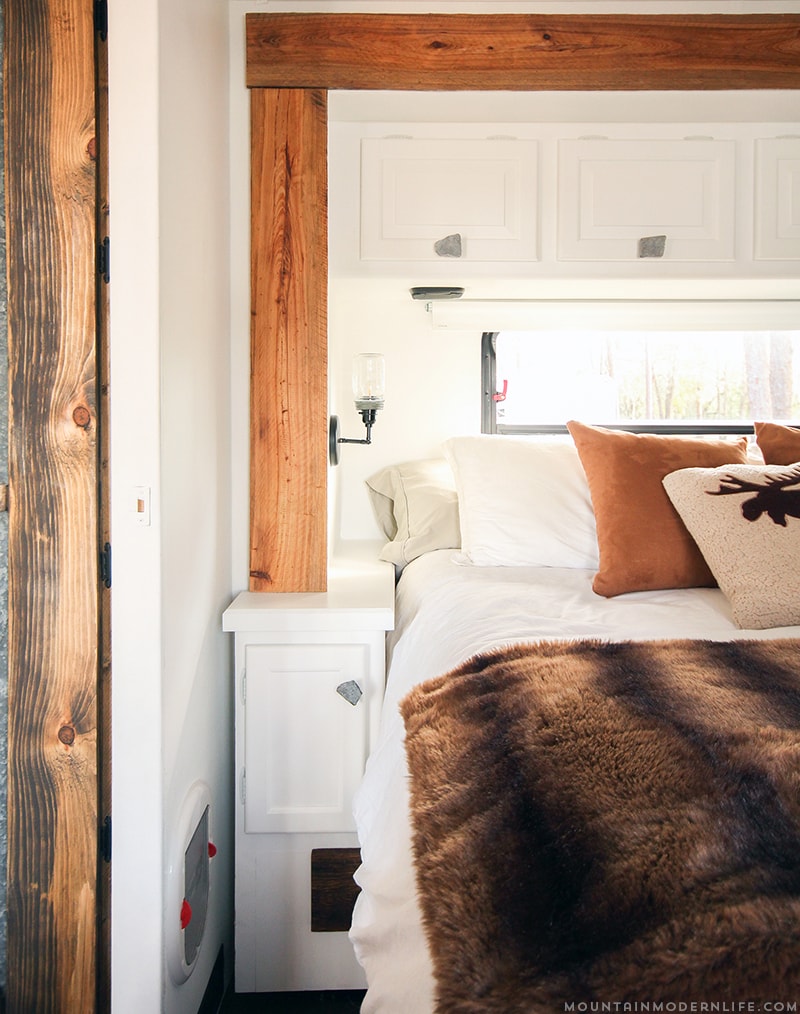