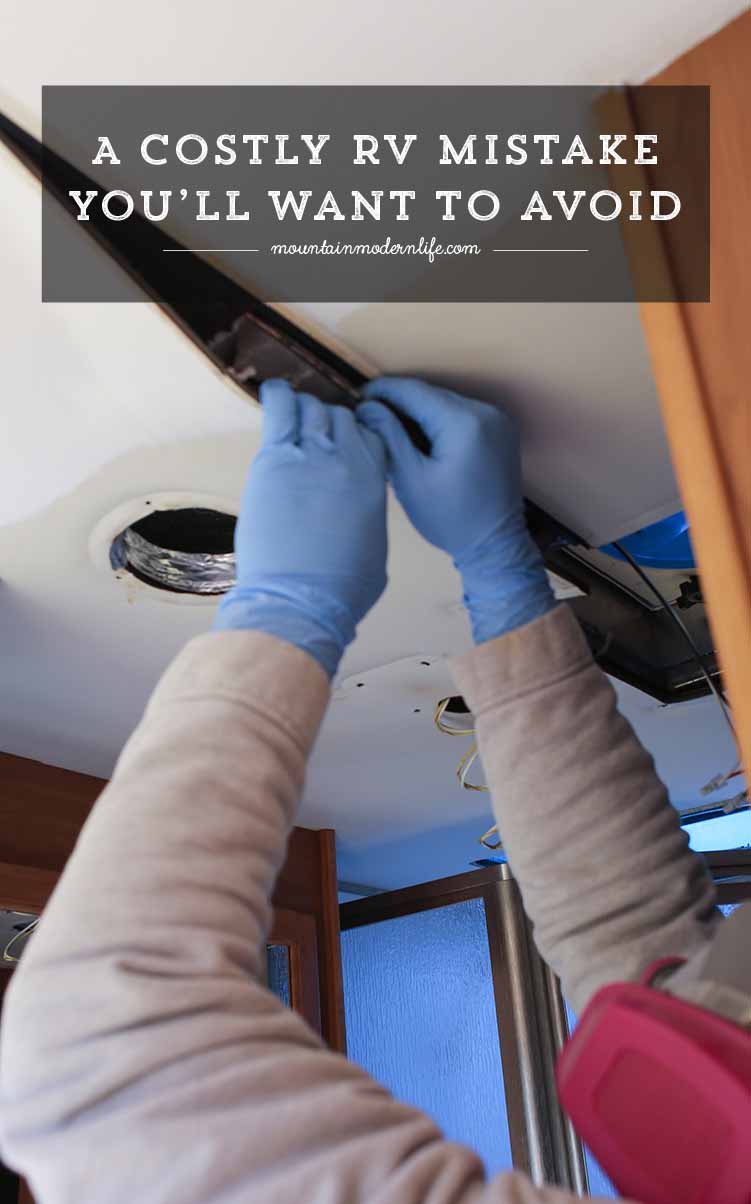 Things may seem quiet over here on the blog, but that’s only because we’ve been spending the majority of our time dealing with a costly RV mistake we could have avoided ceiling water damage. And as it turns out, it’s not covered by our warranty or insurance company.

For those that are new here, you can read more about us and our RV adventure here, or view our most recent RV tour.

Water damage is one ugly beast when it comes to motorhomes, and sadly it happens more often than you would think.

For this reason, we spent countless hours reading articles and watching videos on how to avoid buying an RV with water damage. We even had checklists printed out that we brought along with us when we were narrowing down our selection.

Despite checking the ceiling and walls for soft spots, feeling around the inside of every cabinet, inspecting every corner, and double-checking the roof, we ended up with an RV that had a water leak. Go figure.

Yes, we are kicking ourselves for making such a dumb mistake. We still don’t know if the damage existed when we purchased the coach, or if it happened during one of our trips, but either way, it’s been both a nightmare and a blessing.

However, we will say that with the amount of damage and rust, we honestly believe there was an issue before we bought the coach. 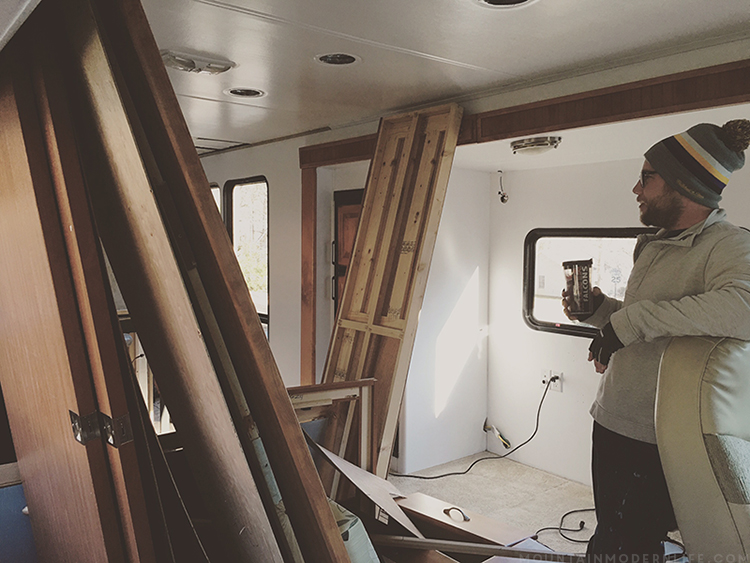 What caused the RV Water Leak?

As it turns out there were a couple of cracks at the bottom of the bathroom skylight that were missed when we inspected the roof. These were not visible from inside the shower due to the inner skylight blocking the view, but were discovered once we removed all of the vents and the inner skylight to clean them and make painting the ceiling easier. The sagging ceiling panel and rust was a pretty good indicator as well. 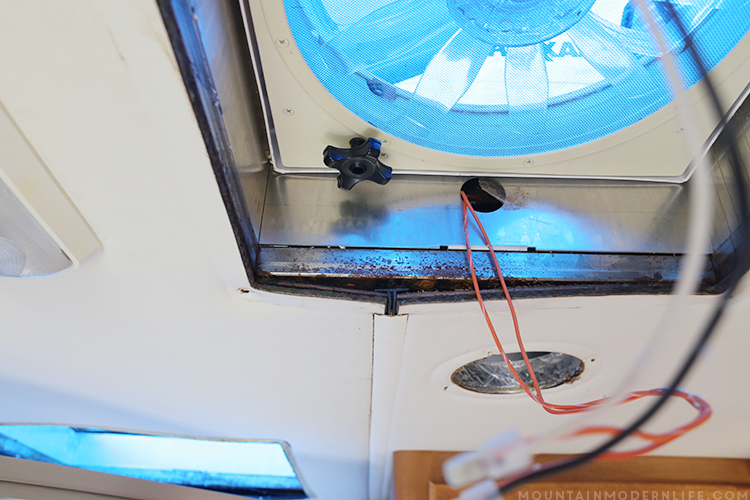 Here’s a photo with the inner skylight removed from the bathroom: 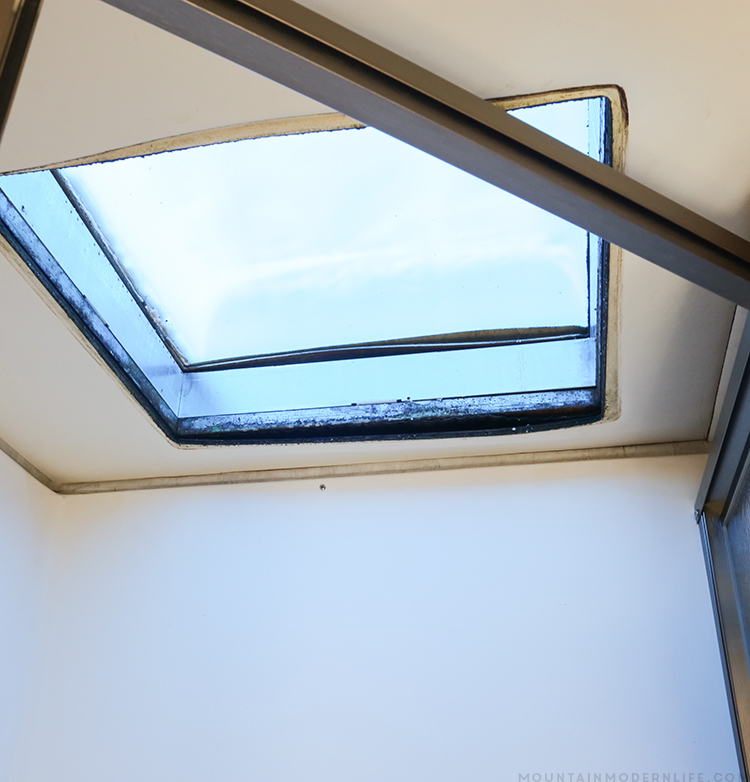 Eric has been on the roof a few times since we purchased the RV and even re-caulked it, but the skylight damage went undetected. Now that we know they are there it seems obvious, but they were so thin that I can also see how we missed them. It doesn’t help that it’s rained an INSANE amount since we purchased the RV. There were some weeks where I forgot what it was like to not have rain.

Be sure to Avoid this Costly RV Mistake!

The moral of the story? If you currently own an RV or camper, or you are planning to buy one, double-check the skylight for any damage especially around the base!

With that being said, I honestly do believe that this situation has proved to be a blessing for us. Sure it’s been stressful, costly and time-consuming, but it’s also given us the opportunity to learn more about our coach before we hit the road. 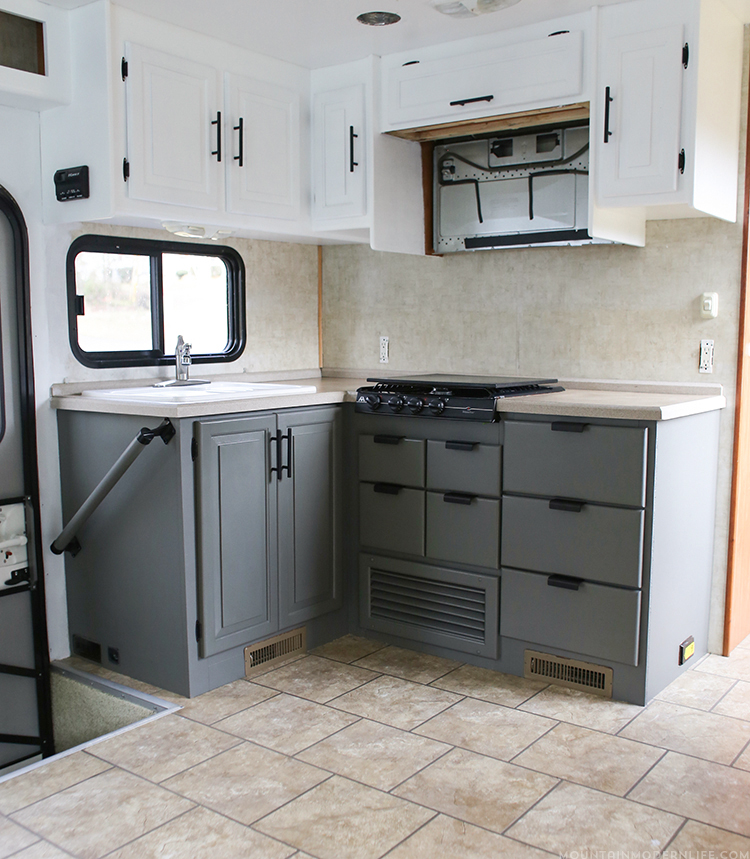 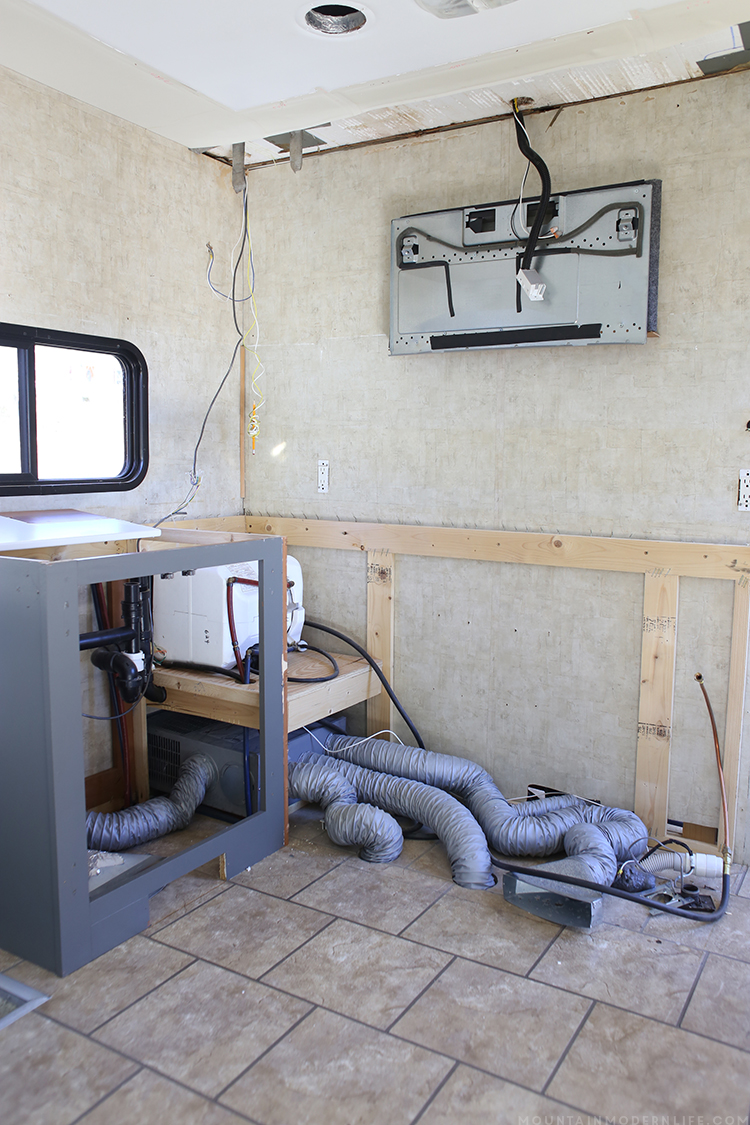 Kinda looks like I have the before and after switched up, eh? Haha.

We didn’t originally plan to move the kitchen cabinets, but once we realized the costly water leak had traveled into the kitchen area and found water behind a false wall in the upper cabinets, we knew it would be best to remove them. I’m not sure how long the water was there but we checked behind that false wall a couple of months ago when trying to locate the hot water heater bypass and there was no water there at that time.

Although we were lucky in the sense that there was no black mold in the ceiling, we did find some mold in between a few of the cabinets which we were able to clean up with some tea tree oil (I’ll share more on that in a later post).

Be sure to use all safety precautions when dealing with water damage as you never know what may be lurking behind that wall or ceiling. We had our safety goggles, gloves and respirators handy.

Things can look pretty perfect on the outside, but what’s underneath may surprise you. And since motorhomes don’t stay stationary, it’s easy for water to spread into other areas.

Since we have plans to update a lot of other details in the RV, we figured it wouldn’t hurt to remove some cabinets and walls now. This way we could double-check for any additional damage while we still have a warm bed and non-construction looking home to go back to. 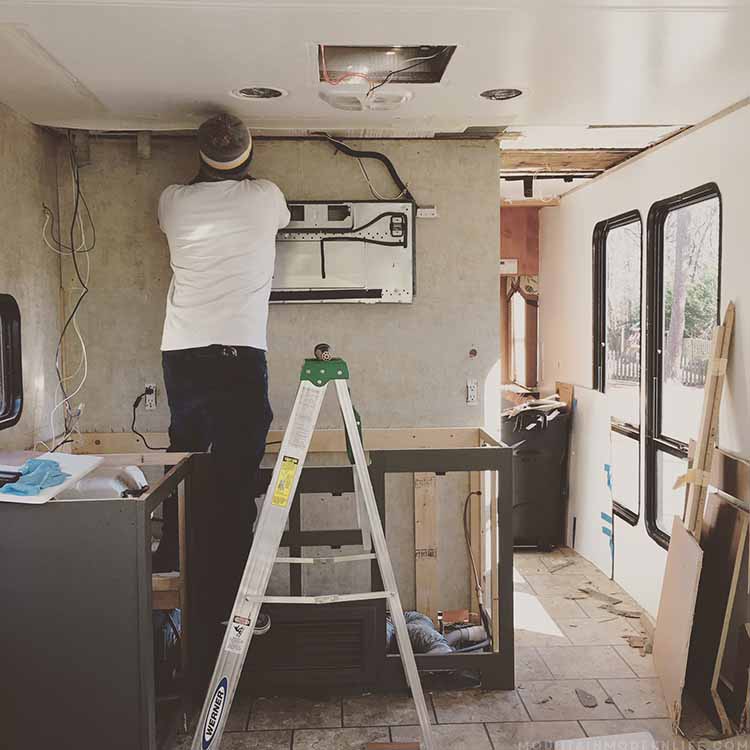 We are moving slowly to make sure we avoid creating more damage than good, and it doesn’t help that there are 435987394583974653745 staples and screws in every single thing. I can’t complain too much because at least that keeps everything in place while you move and bob down the road.

There are some great articles, videos and RV forums out there which have helped immensely, but at the same time it can still be really difficult to find the right solution when every RV make, model and year can vary greatly. We want to be self-reliant when possible and are trying to learn as much as we can in order to avoid another costly RV mistake in the future.

Have an RV or Camper? Don’t forget to buy a Dehumidifier!

It did help by removing A LOT of the moisture, but we now realize what we should have attempted to remove the vinyl padding FIRST, leaving the plywood exposed while we ran the dehumidifier. Although running it beforehand helped, the areas where the vinyl was still covering the ceiling were still pretty damp a couple of days later when we went to remove the vinyl. Duh. So really we should have just splurged on a nicer dehumidifier rather than renting one. (We later bought this Danby Dehumidifier – affiliate link).

This is also why we freaked out a bit when we saw the plywood under the vinyl because it looked black and was pretty scary. However, the next day we saw how much it dried just from being exposed to air and realized it was only that dark because it was wet, not because it was covered with mold. Whew!

It basically looked worse than it was because it was still wet. 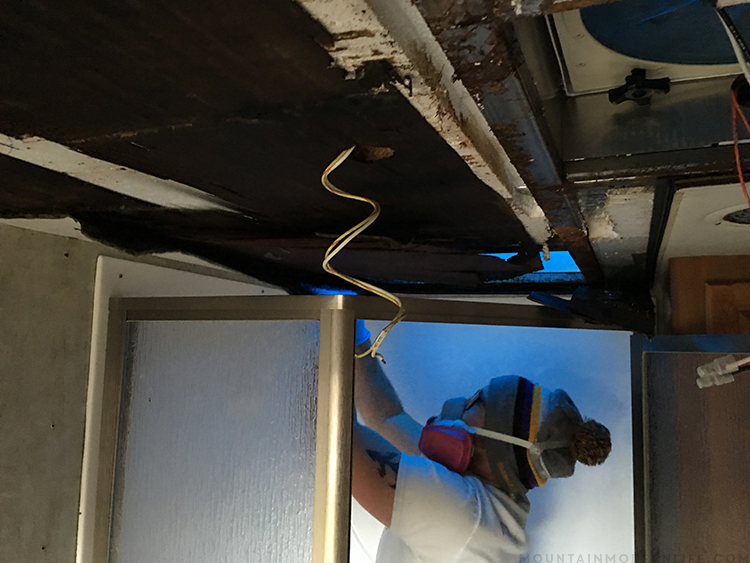 Here’s a photo showing some of the plywood the next day after it had dried up a little bit more: 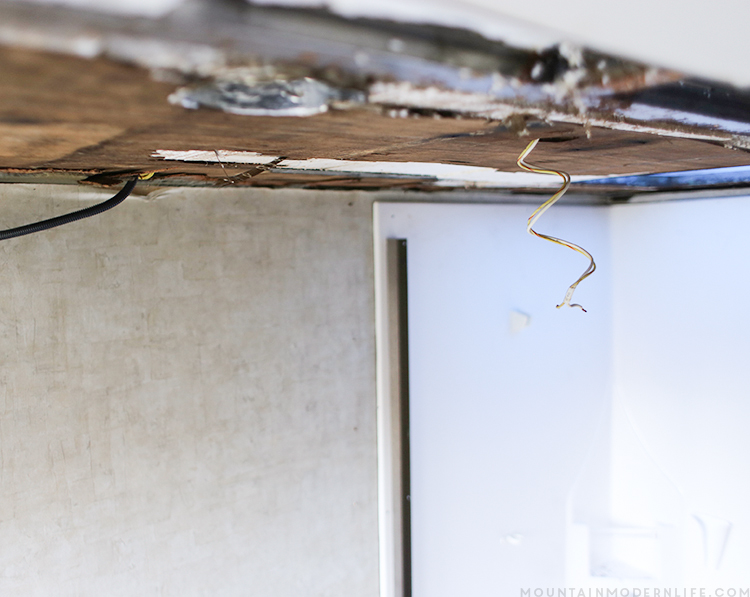 We received our new skylight from Tiffin and should have the new ceiling panel within the next 2 days, yay! We still need to do some cleaning, including taking care of the rust on the metal and I have some “green” recipes I’m going to test out.

The price for the inner and upper skylight replacement from Tiffin was $42 each and the single ceiling panel was $60. Not too shabby. We were told they wouldn’t know the shipping because it was based on freight charges. I had looked up ceiling panels at other online vendors and they all pretty much said the same thing about shipping costs, so we didn’t think much of it. In all honesty, we didn’t think it would be more than $50.

We were charged $150 for the shipping since the ceiling panel is so large. Yes, the shipping cost was more than the items!

The price for the products was super reasonable based on what I had researched but the shipping was definitely more than I had expected. I did call the parts department back to ask if it’s possible to be notified in the future about shipping before an order is placed so that I could pass that information along to anyone else, and they said yes.

Just be sure to tell the tech that you want to know the cost of shipping BEFORE they put your order through and they will have either someone from the service department or from shipping contact you to let you know the total cost, which varies by size and weight. They will then wait to get your approval before pushing the order through. Just something you may want to know if you decide to order parts and want to do some shopping comparisons. Overall, we are very happy with the service Tiffin has provided 🙂

So this is the current state of the bathroom after the costly RV mistake: 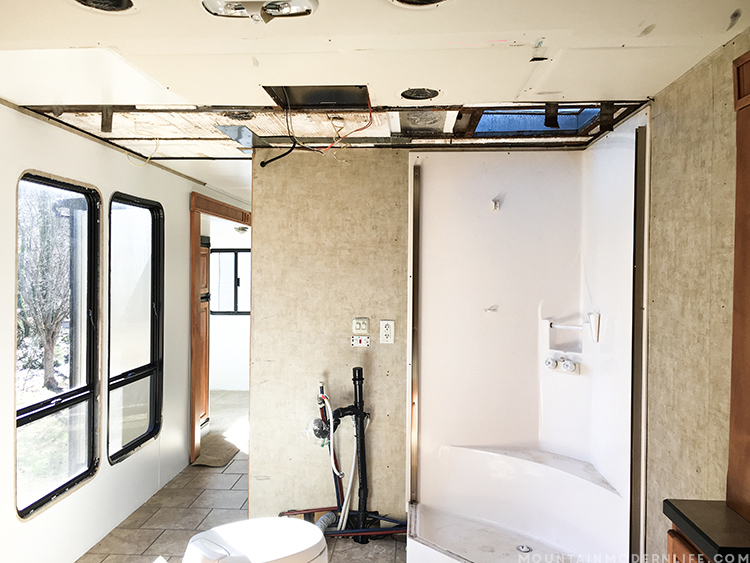 We also poked around to make sure none of the water leaked into the sidewalls, and luckily it didn’t.

We will be sharing more on how we are actually repairing the water leak in a later post, but here’s an updated video of Eric talking about some of the damage and what we have done thus far.

A good point to note is that while we are experiencing this costly RV mistake, it still hasn’t been nearly as bad as it could have been. We stayed positive and are pushing through it.

Have you experienced any costly mistakes in your RV or camper and have any advice you want to pass along to others?  We’d love to hear about it in the comments.