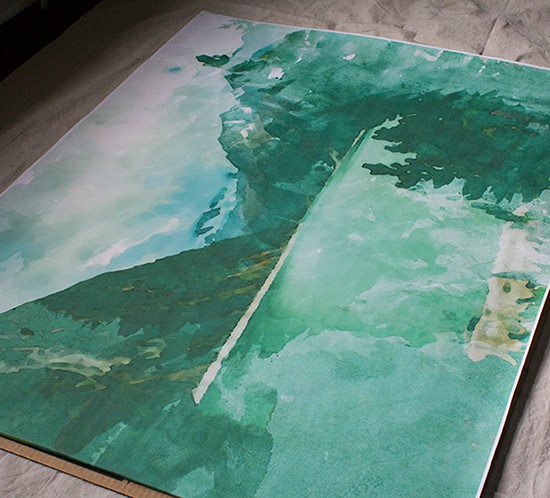 Disclaimer: This post may contain affiliate links, meaning, if you click through and make a purchase we may earn a commission. This is at no additional cost to you. View our full-disclosure here.
Pin
Share
Tweet
Email
6K Shares 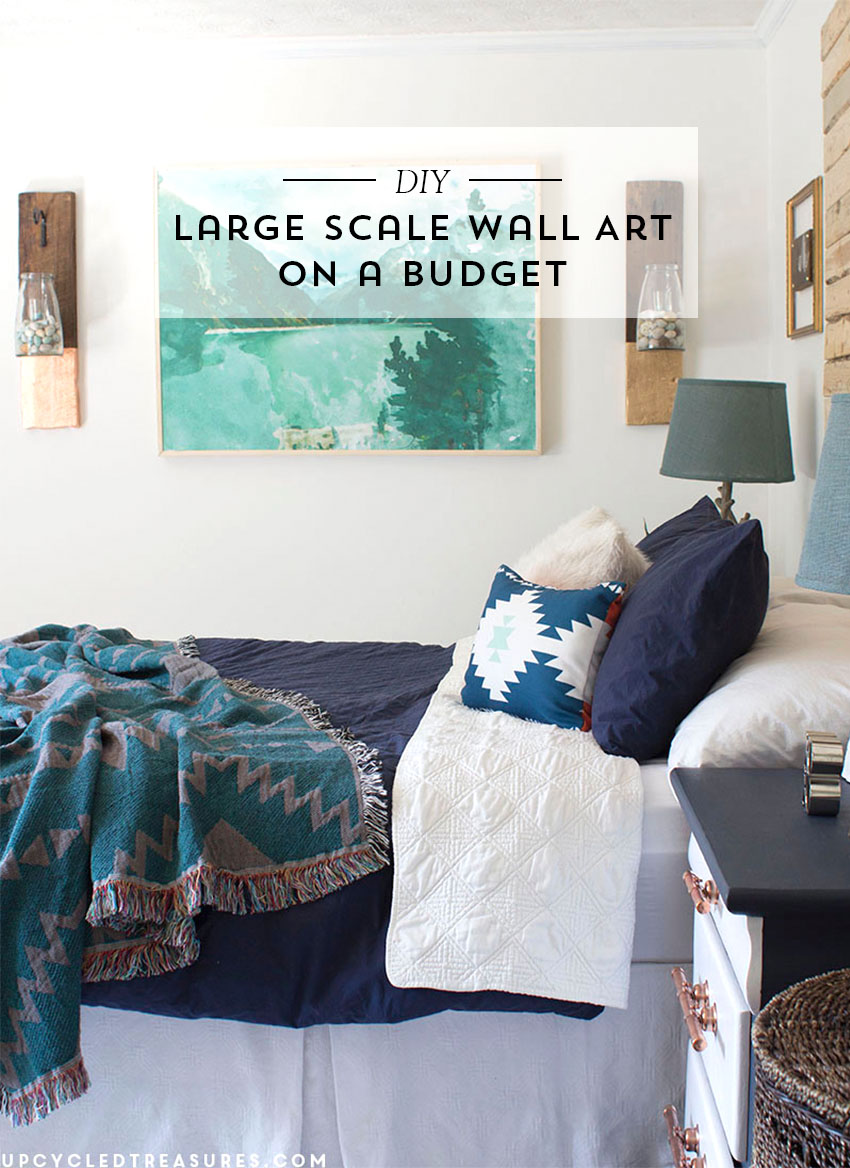 I’ve been on the search for some large scale wall decor for our master bedroom, and this project was sort of a happy accident that occurred along the way. Yay for happy accidents!

It all started with this beautiful image of the mountains I had purchased in a design bundle pack several months ago. It’s also available here and all of the photos were taken in Iceland and Europe. It doesn’t say exactly where this photo was taken. Do you know? 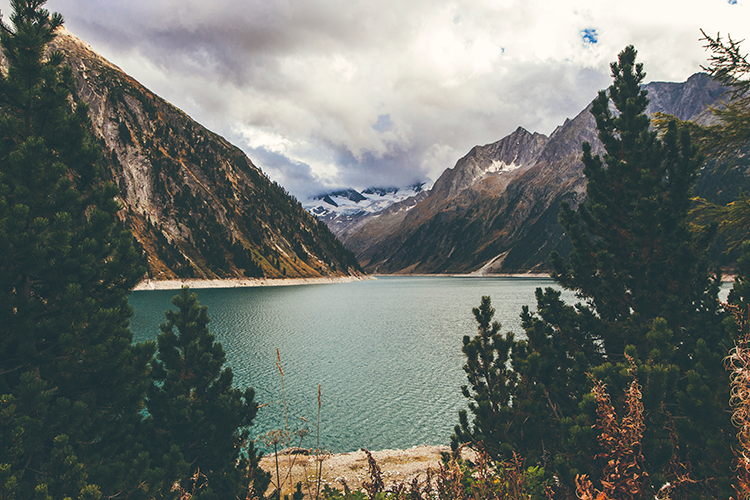 I used it for my desktop image for a while and then one day decided to play around with the colors of the image in Photoshop, because Spring was on the horizon, and I wanted more saturated colors. I then used this Photoshop app that gave the image a watercolor effect. Warning: playing with this mockup generator may result in several lost hours. You’ve been warned 🙂

Unfortunately, I don’t remember exactly what color changes I made, but this was the outcome: 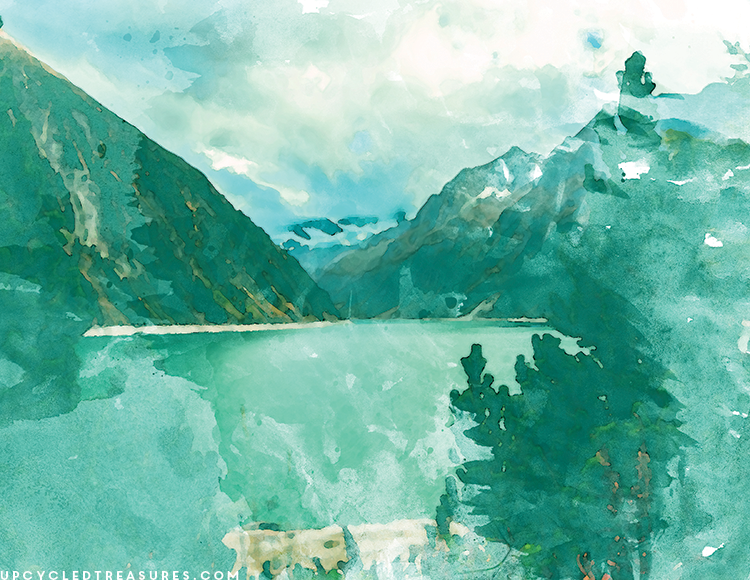 Aren’t the colors dreamy? I immediately knew that this had to go into our bedroom and began brainstorming how to get this image up on our wall ASAP.

Although I purchased the engineering print and plywood for this project, everything else I already had on hand.

I had previously purchased a 48 x 36 canvas that I planned on painting and hanging up in our room, so my first thought was to attempt to paint this. Ummm, let’s just say it was a bit of a fail. It started out okay but about an hour in I decided to go in a different direction that would require less time, paint, and back pain. Not to mention my painting skills aren’t exactly the best. Ha.

So instead I got back in Photoshop and cropped the image onto a 36 x 48 document, knowing I could send it over to Staples to be printed as a color engineering print.

I’ve purchased black and white engineering prints from Staples in the past with no issues, but never this large and never in color so I was a little nervous about how the color would turn out, but was willing to take the risk.

Well, I worried for no reason because it printed up way better than I could have expected! It cost about $23 but there have several size options for less, and the b&w prints are even less expensive. 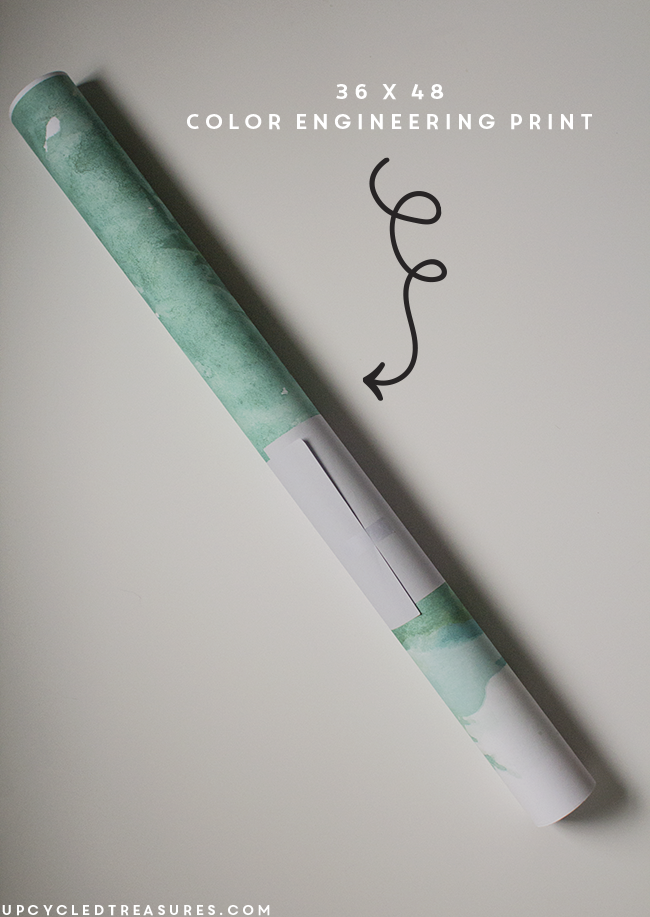 I had asked one of the employees if they could have the print extend to the edges, or if there would be a border and she told me it would go to the edges…. but it didn’t. Although I was hoping the image would bleed to the edges, I sorta expected it to have a white border. This wouldn’t be an issue except I wanted to add the print to my 48 x 36 canvas, along with a clean simple frame and didn’t want the white border to show.

Of course, if you are using a smaller canvas you won’t have to worry about this problem but after some thought, we decided that instead of using the canvas, we would purchase some plywood to add the print to instead.

So we headed out and purchased some underlayment that was about $12 and got it cut down to 47 x 35 at the hardware store. We only needed about half of it so we still have the other half for future projects, yay! 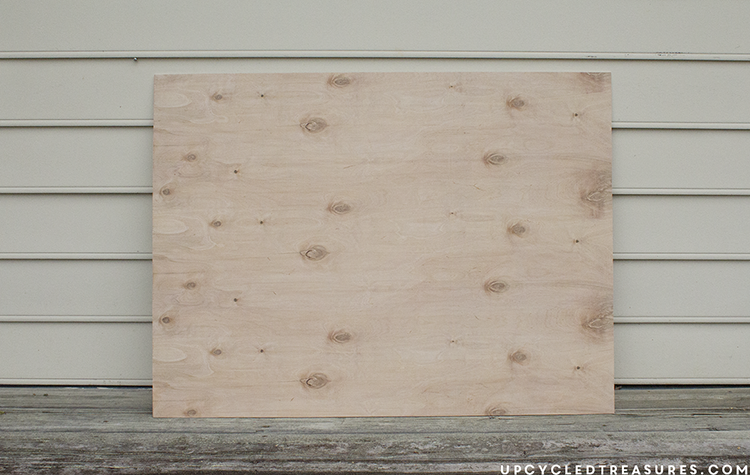 Looking back on it, thicker plywood would have made it easier to attach the frame the way I wanted, although it would have been heavier.

I contemplated using mod podge to attach the print to the wood, or if I should do the transfer method using some gel medium. However, due to the size of the print, I figured the easiest way would be to use spray adhesive. 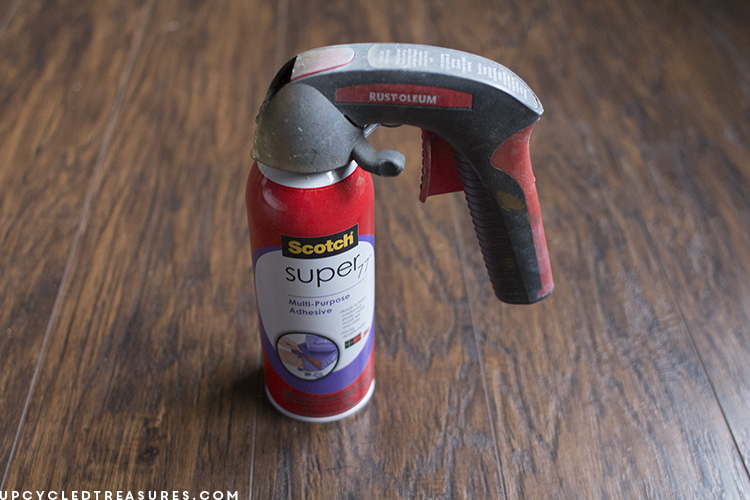 So I centered the paper onto the plywood and then taped one edge of the paper to the back of the wood. {The print is not centered on the plywood below}. 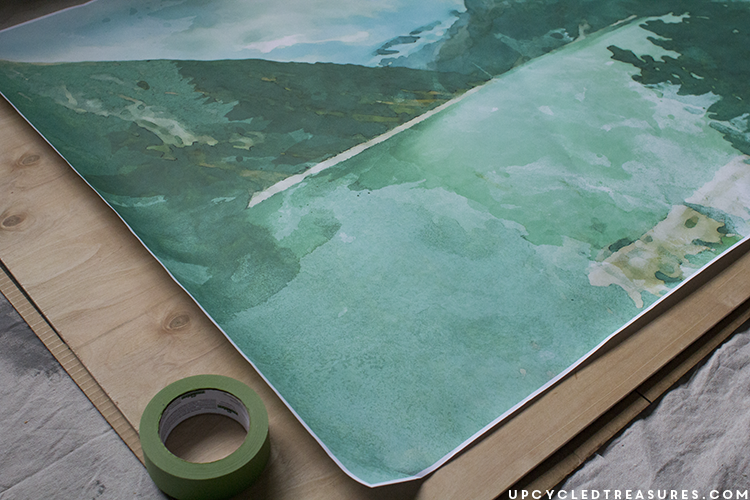 I sprayed the plywood with spray adhesive and Eric helped me slowly move the paper down into place. I then smoothed the paper out as much as possible to avoid wrinkles, starting from one corner and working my way out. 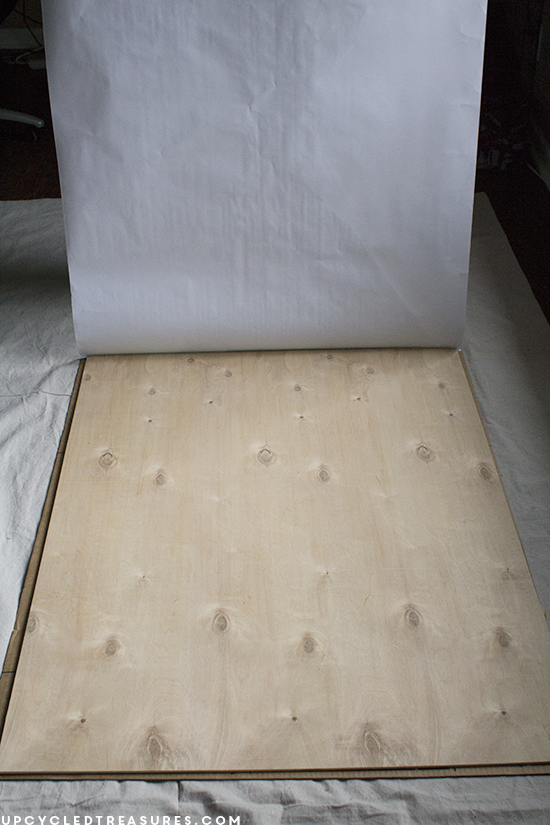 Here is what it looked like from the front: 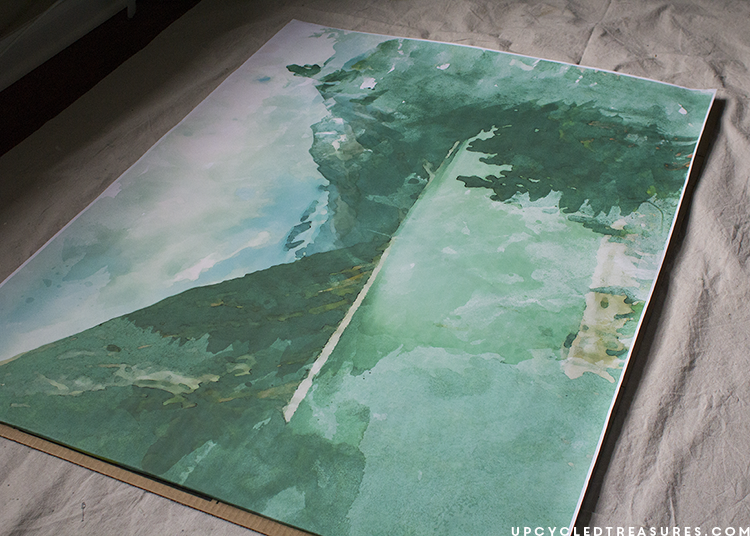 And here is what it looked like from the back: 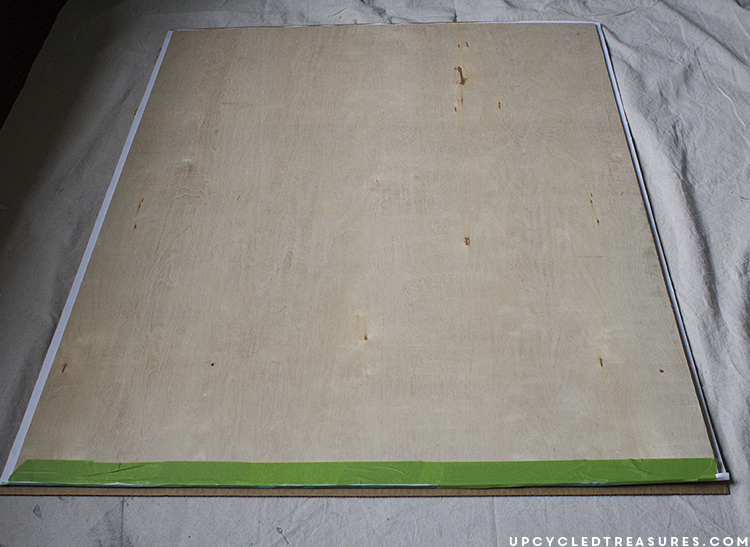 I then went around and taped all of the edges to the back of the plywood.

Afterward, I used a large Mod Podge brush to add some gloss mod podge on top of the print, which helps seal it into place. I opted to use the large brush vs a foam brush because I wanted to get more coverage since this was such a large print. 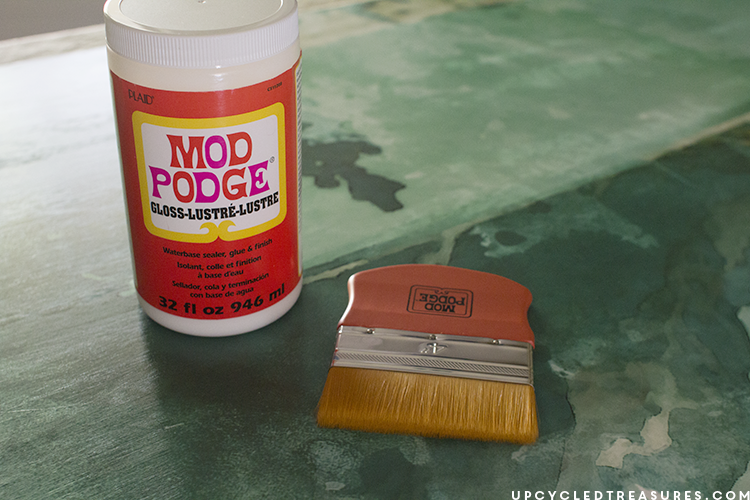 I love how it made the image look all glossy and pretty! I was a little disappointed that the mod podge brush lost some bristles in the glue, but they were pretty easy to wipe off. It was my first time using the brush so I think if I had washed it first that may have helped prevent some of the bristles from coming out.

However, if I were to do this again I would probably use a foam roller instead because that would help the mod podge go on evenly, and prevent streaking or the bristles from getting stuck in the glue. I did use 2 coats of Mod Podge, letting it dry in between.

You may notice that when the Mod Podge is added, some bubbles start to show up, but you can use a credit card to carefully smooth those out. I used the scraper from my Silhouette machine which worked really well. 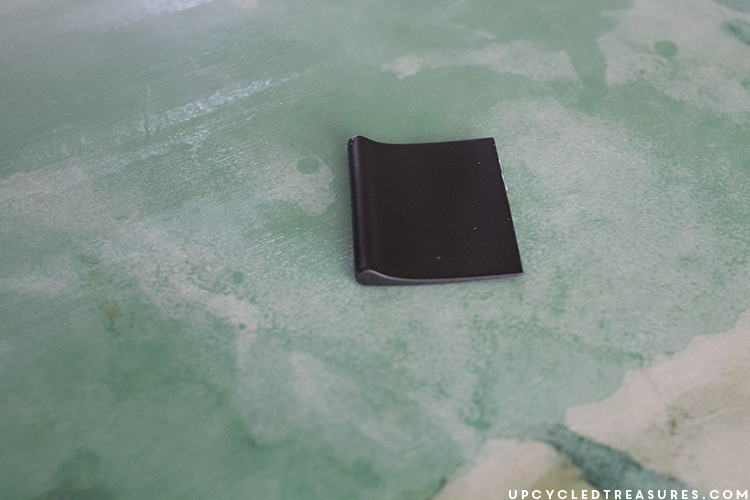 If you added the print to the canvas then you are all finished and can hang it up, otherwise, you can add a frame at this point.

Click Here to see how we built the large frame, and here to see how you can easily re-create this on an 8×10 canvas with a super-duper easy wood frame made of paint sticks. 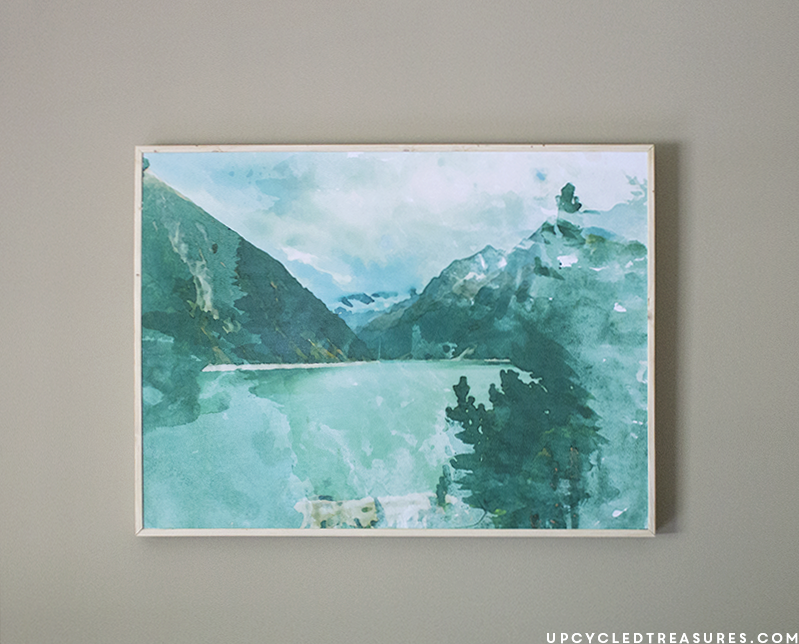 I don’t know about you, but I’m honestly over the moon with how this DIY large scale wall art turned out! Sure it would be better if this was a photo I had actually taken, but I still love it! 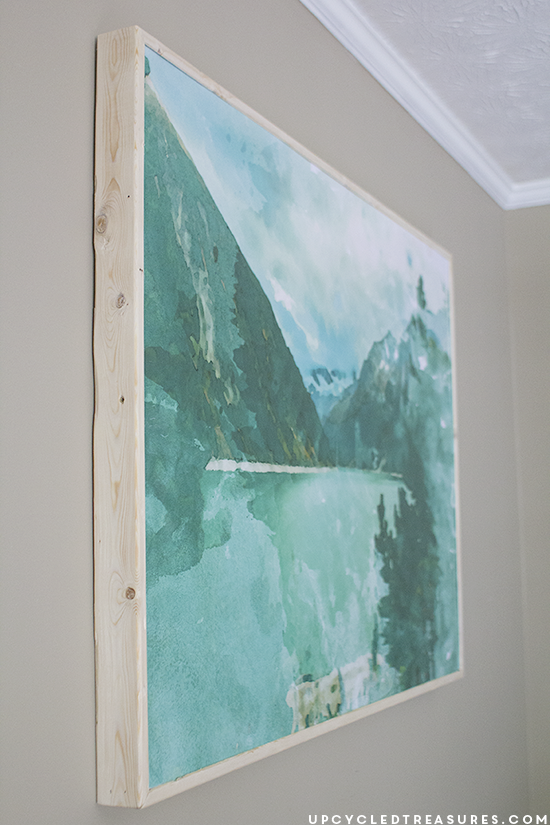 What do you think of our DIY large scale wall art?

This is such an easy way to create large scale art using some of your favorite travel, family or wedding photos, and it would also make a great gift.

If you are going to use plywood, thicker plywood is easier to frame out, although it will also be heavier. Canvas would be the easiest/lightest option, or you could even use foam.

Here is an updated photo of our DIY large scale wall art up in our bedroom: 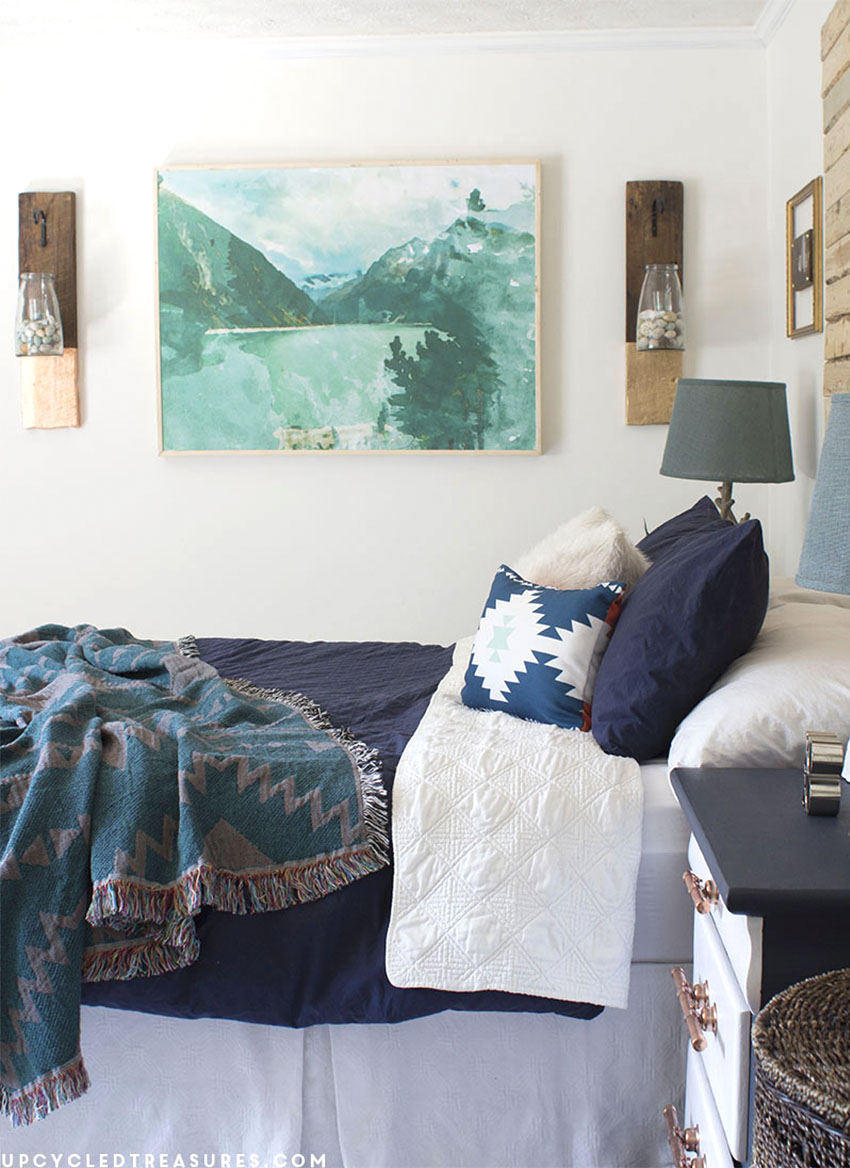 Don’t forget to check out my 8 x 10 canvas version along with the FREE printable HERE.