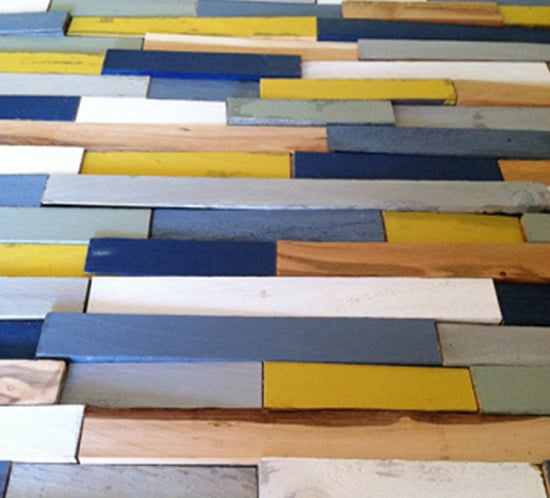 Disclaimer: This post may contain affiliate links, meaning, if you click through and make a purchase we may earn a commission. This is at no additional cost to you. View our full-disclosure here.
Pin
Share
Tweet
Email
6K Shares

Last week I decided it was time to figure out a way to hide this hideous metal door (HVAC vent?) on the hallway of our apartment. It was only minutes after I told Eric, my husband, that I needed to find some artwork to hang over it that I was inspired to create my own from this post on Pinterest. This post uses coffee stir sticks but I had 3 packs of wood shims I purchased a few weeks ago when I thought I was going to use them for this mirror but didn’t. I knew the wood shims would be perfect and more to scale for what I needed. You could always use scrap wood, paint stir sticks, etc.

Side note: Don’t worry about the vents either – there was a gap between the wall and the wood shim art when it was on the wall – so the vents were not being covered up from the frame and the air was still getting out.

Originally, I was going to head over to Michael’s or JoAnn’s Fabrics for a large frame and use one of their 50% off coupons, but miraculously found this amazingly HUGE, wood frame at Goodwill for $26 that someone had made. The artwork in it was pretty interesting, but not my style and I knew I would be able to use it for my project.

Why is it that I get so possessive like a mama bear protecting her cub when I am at thrift stores and think someone else it eyeing my treasure? I actually tried to pick this thing up and walk it to the front but it’s nearly as tall as me and I could barely get it an inch off the floor since it was so heavy. Luckily a sales associate saw me and was able to make me a tag for it before I broke it or hurt myself. 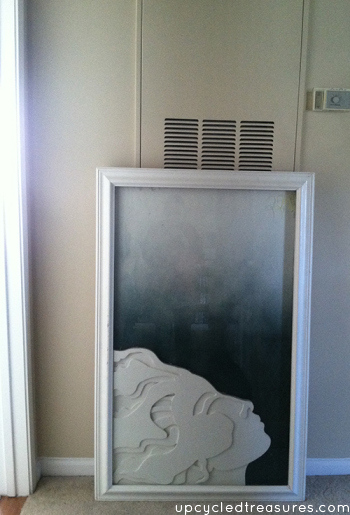 I was also inspired by this piece of furniture from HomeGoods which I really want to try on something in the future: 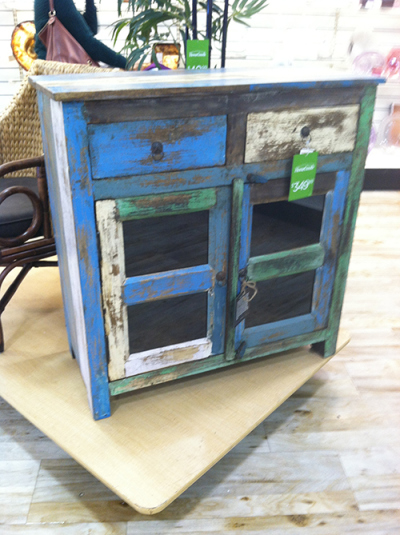 Below is a list of the materials needed for this project. I already had all the supplies except for the frame so this project cost me less than $30, woot woot!

The first thing that I did was lay the wood shims on top of the frame to make sure I would have enough.. 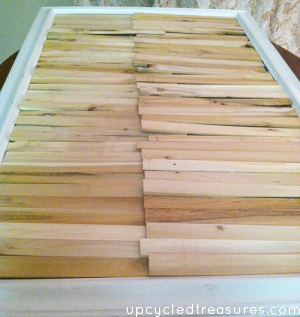 Then it was on to deciding my color scheme, which I already had in mind, and start painting away. This can be tedious but the TV was on in the background so it wasn’t too bad and went by rather quick. 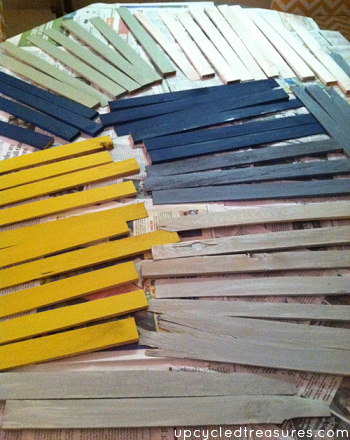 I then arranged the colors in the order-ish I wanted them to be in. As you can see I had also picked out my favorite wood shims with character to put in the mix as well. 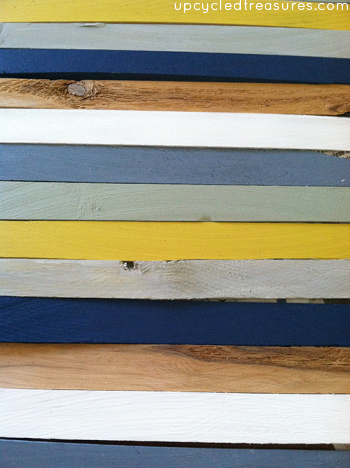 I let the sticks dry overnight (I started it pretty late as it was) but then painted over them with a black wash which was 50% black paint and 50% water, let that soak in for a couple minutes and then washed it off with water. I did this because I wanted to give them an aged effect and add another layer of interest. In the future I may let the wash stay on a bit longer for a bigger impact or maybe even try a white wash instead. While the sticks were drying my boy-toy helped me take the frame apart so I could start gluing the sticks down. 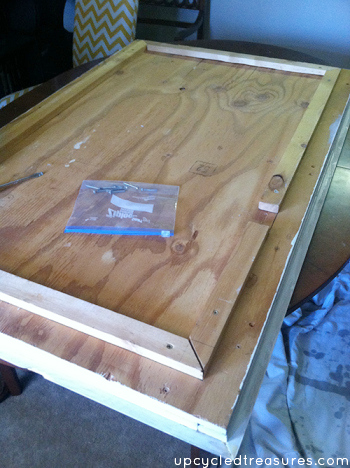 Here it is without the white frame and before we removed the wooden head silhouette thing(??). 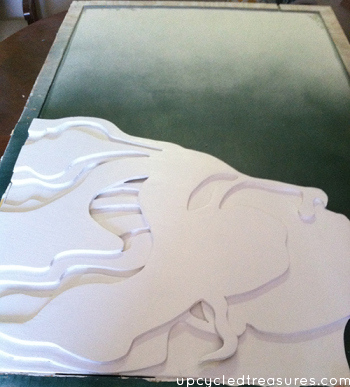 After the sticks were dry I started sawing them in random spots for my subway tile effect (we were actually able to screw the miter box down into the wooden background of the frame because it was so thick and I was going to be gluing on top of it anyway). This was my first time using the saw and it was much easier than I thought it would be, and less scary. I have a crazy fear of sharp objects, especially knives and swords but think I got over that a little bit today, haha. 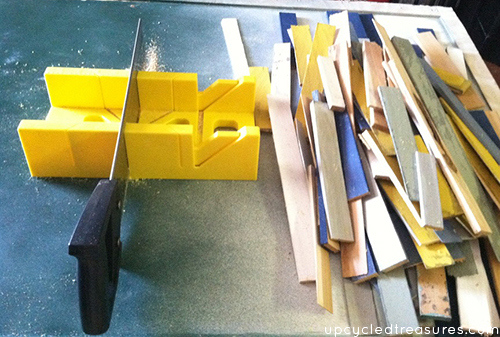 After all my pieces were cut it was time to put the puzzle together, which took some time trying to get the colors where I wanted them but the time was well spent and well worth it. After I arranged the pieces where I wanted them to go I then went back and glued each piece down with the glue gun. 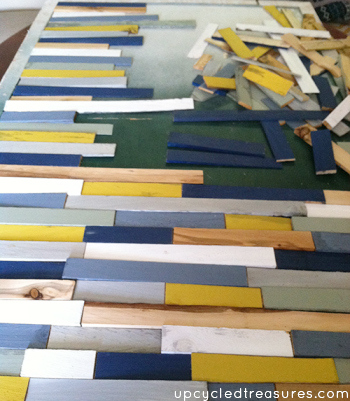 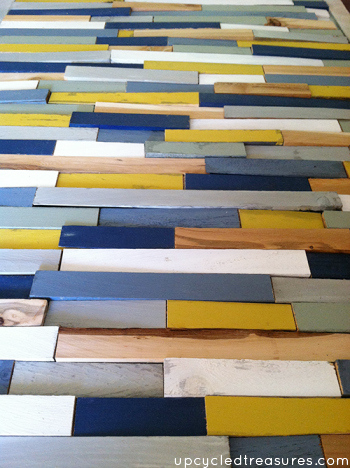 After the pieces were all glued down I screwed the white frame back into place and my DIY wood shim artwork was completed! Now I need to figure out a way to hide the thermostat… 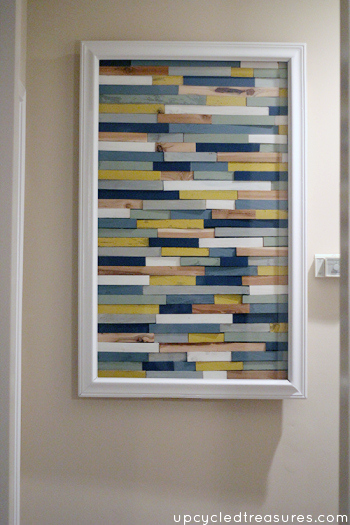 I know this may not have taken a whole lot of skill but it was fun and I just LOVE the outcome! I later re-arranged our apartment and moved the wood shim art into the living room. If you look in the mirror reflection you can see the art I moved from our bedroom into the hallway where the wood shim wall art was. 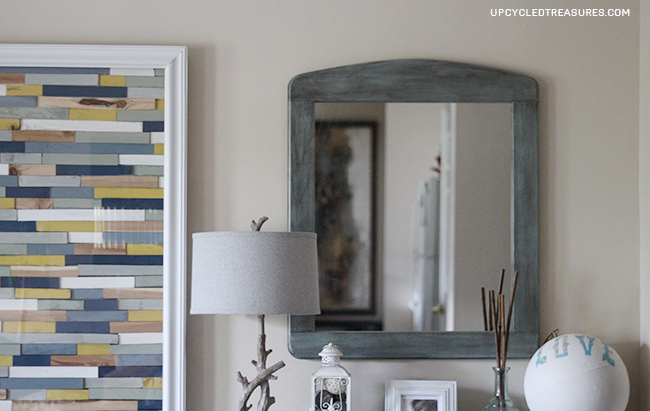 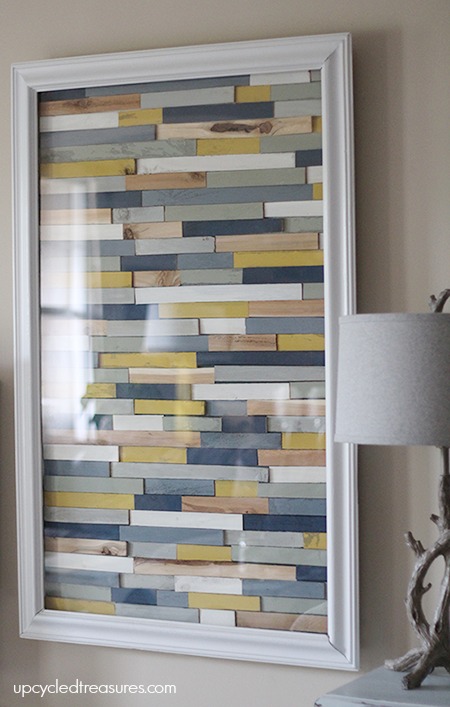 Update: When we moved into our rental home the glass on the frame broke (boooo), but I actually like it better now in a strange way. Here is an updated photo of it on our living room gallery wall. 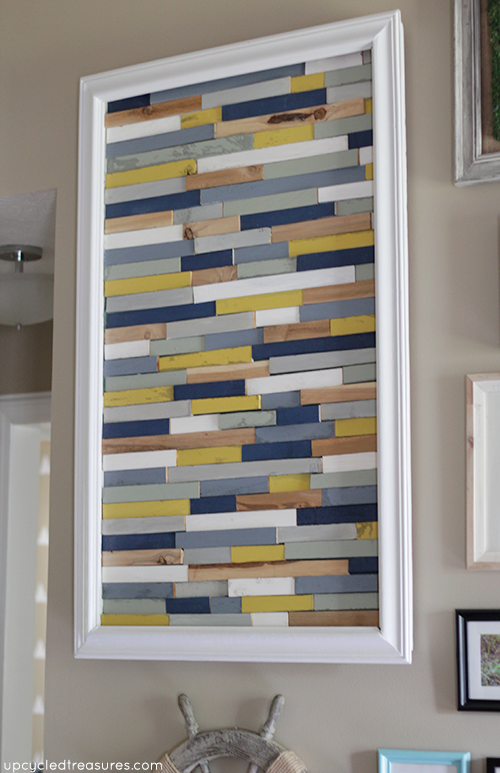